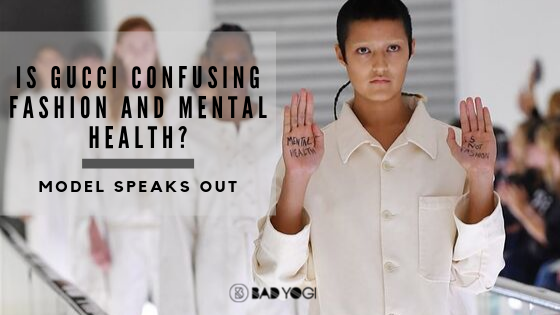 Is Gucci Confusing Fashion and Mental Health? Model Speaks Out

September was a month full of fashion: New York, Paris, and Milan Fashion Week presented us with some jaw-dropping designs. While numerous fashion shows presented some stunning pieces and made some important statements, there was, of course, some controversy as well. Gucci is in hot water for one of its designs that were presented during the Gucci Spring/Summer fashion show in Milan – and it’s completely justified.

Models who walked the runway for Gucci made sure to let the audience know that they were not in agreement with the message the designs sent. According to Today, the fashion giant’s designs consisted of a series of neutral, uniform-inspired ensembles, of which many resembled straitjackets. The pieces in the collection seemed to have been inspired by the jackets used to pacify patients in understaffed asylums during the Victorian era. We’re all very aware of mental health in the age we’re living in, which makes these designs seem insensitive and even cruel.  One of the models thought so too, so they made sure everyone knew they didn’t agree with it. 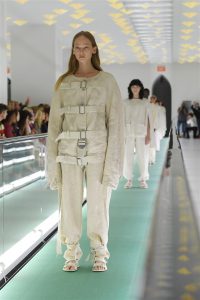 The designs featured items that resembled the jackets used to pacify patients in asylums in the Victorian era.
Image: Getty Images

One of the models who walked the runway for Gucci, Ayesha Tan-Jones, who prefers to be referred to by the pronouns they/them, found a subtle yet striking way for themselves and their fellow models to silently protest the designs. As they walked down the runway, they flipped their palms up for the audience to read their message, which said: “Mental health is not fashion.” 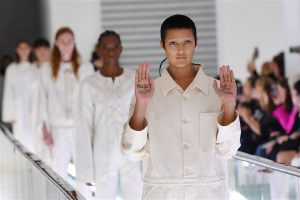 Tan-Jones held a silent protest while walking the runway for Gucci in these controversial designs.
Image: Getty Images

Speaking out loud on social media

Those who missed it could see it afterward on Tan-Jones’ Instagram page, where they explained the reason behind the silent protest, saying, “It is in bad taste for Gucci to use the imagery of straitjackets and outfits alluding to mental patients, while being rolled out on a conveyor belt as if a piece of factory meat.” Tan-Jones continued to say that the stigma surrounding mental health needs to end, and Gucci’s designs aren’t helping the situation.

“As an artist and model who has experienced my own struggles with mental health, as well as family members and loved ones who have been affected by depression, anxiety, bipolar, and schizophrenia, it is hurtful and insensitive for a major fashion house such as Gucci to use this imagery as a concept for a fleeting fashion moment.”

Tan-Jones also made use of the opportunity to encourage their followers to be kind to those struggling with their mental health, reminding them that the models’ bravery is very small compared to those who actually have to get up every morning and battle their mental illness: “To have the bravery to get out of bed, to greet the day, and to live their lives is an act of strength, and I want to thank you for being here and being YOU ! ☀️”

The response was amazing

The response to the silent protest was overwhelmingly positive, and Tan-Jones said that they are thrilled by people’s response. They added that it feels amazing to have so much support from people on the internet regarding this important matter. For them, it is proof that mental health affects a lot of people and that the protest helped to bring it into the public eye. Once it’s out there for people to see, the stigma surrounding it can come to an end.

“We must get people talking about this important issue, to shine a light, bring understanding and acceptance of everyone’s unique mental health journey. I hope we can continue to talk, raise awareness and, most of all, support our loved ones, friends or even strangers in any way we can through their mental health.”

What did Gucci have to say?

In the meantime, Gucci’s creative director, Alessandro Michele, said that “these clothes were a statement for the fashion show,” according to Pink News. In an interview with reporters, Michele explained the brand’s message behind the designs.

“Uniforms, utilitarian clothes, such straitjackets, were included in the fashion show as the most extreme version of restriction imposed by society and those who control it. These clothes were a statement for the fashion show and part of a performance.” 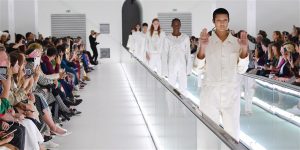 Gucci says that the designs were all about freedom and therefore Tan-Jones is entitled to their opinion.
Image: Getty Images

The show itself was about freedom, so Gucci was not at all offended by Tan-Jones’ protest and felt that Jones is free to protest. In an Instagram statement, the brand said the clothes represented “how through fashion, power is exercised over life, to eliminate self-expression.”

Standing up for what’s right even when it’s hard

In the meantime, Tan-Jones donated their entire modeling fee from Gucci to mental health charities. They revealed that some of their fellow models will be donating a portion of theirs as well. 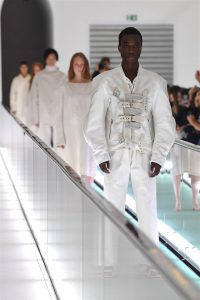 Some of Tan-Jones’ fellow models will be donating a portion of their modeling fee to mental health institutions.
Image: Getty Images

It’s great to see that these models aren’t just all about the money – they care about the message the clothes they wear send to their audience. It’s easy to look the other way when the responsibility to create change falls on your shoulders. What Tan-Jones did is great. Hopefully, it will start some necessary conversations about mental health and how it is perceived publicly. It’s about time the stigma ends – mental health issues are nothing to be ashamed of. Getting help shouldn’t be something you put off because you’re afraid of what people will think. We applaud the initiative Tan-Jones and their fellow models took in the situation.

What are your thoughts on the designs? Let us know in the comments.