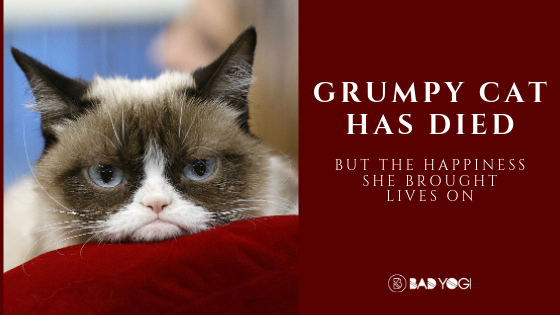 Grumpy Cat Has Died, but the Happiness She Brought Lives On

On Friday, the world was overcome with sadness after an announcement on Twitter that the beloved Grumpy Cat has died. She was a good seven years old and the face of countless memes that made people all around the world smile. Whether you’re a cat lover or not, you can’t argue that Grumpy Cat was one of a kind – and we’re all sad that she’s gone.

CNN reports that Grumpy, whose actual name is Tardar Sauce, passed away last Tuesday, but her family only announced the sad news on Friday via Twitter. Her owner, Tabatha Bundesen, said that Grumpy had some complications from a recent urinary tract infection and that it had become too tough for her to overcome. She died peacefully in Tabatha’s arms.

Some days are grumpier than others… pic.twitter.com/ws209VWl97

Grumpy was a very unique cat – the reason for her “grumpy” look was actually the result of feline dwarfism and an underbite, which gave her a look unmatched by any (known) cat on the planet. The world loved her uniqueness and she rose to fame in September 2012 after Tabatha’s brother Bryan posted a picture of Grumpy on Reddit. Grumpy gained an instant fanbase, with many people posting photoshopped variations on the original. The photo’s Imgur page also reached 1,030,000 views in its first 48 hours.

She became an instant star

Many people thought that the pictures of Grumpy were photoshopped, so the Bundesen family posted a video of her on YouTube, proving all the naysayers wrong. This video also racked up millions of views – Grumpy was destined to be a star. The deal was sealed after she participated at the South by Southwest Interactive (SXSW) festival in Austin, Texas. This is where her celebrity status skyrocketed – people were standing in line for hours to take a picture with her, while she grumpily ignored all of them in true feline fashion. She was called the star of the festival by various media outlets, including CNN.

She even had her own merch

Grumpy’s popularity grew, and soon she had her own line of merchandise, Sketchers shoes, comics, and perfumes. She even had her own “Grumppuccino” coffee and was the face of Friskies. She also made her way around the US to appear on various TV shows, like Today and Good Morning America. In 2014, she starred in her very own Christmas film. BBC reports that she also has her very own waxwork at Madame Tussauds in San Francisco, which was unveiled in 2015.

People all over the world paid tribute to Grumpy

After the news of her passing hit the internet, people took to social media to pay tribute to the cat who has made everyone around the world smile. Many shared some of their favorite memes that have been made through the years.

Some accounts simply paid tribute to the grumpiest cat who had ever lived.

Some new memes even started making the rounds, imagining what Grumpy would think of heaven.

Aubrey Plaza, the American actress who voiced Grumpy in the 2014 Christmas film, said that her heart was broken by the news and that Grumpy will always be her spirit animal.

Grumpy Cat was an icon on social media, with 8.5 million Facebook followers, 1.5 Twitter followers, and 2.4 Instagram followers. It’s amazing how one cat could manage all this while us normal people struggle to just get our following to 100 – but if there’s one thing we can learn from this famous cat, it’s that being different really is cool, and that you don’t have to look happy all the time.

Grumpy has achieved more in her seven years on earth than most of us humans manage in a lifetime. That’s feline power for you. She will be missed, but we know that she will live on in the millions of hearts of all the people who loved her, and who turned to her whenever they needed to smile. Hail and farewell Grumpy Cat. You will be missed.