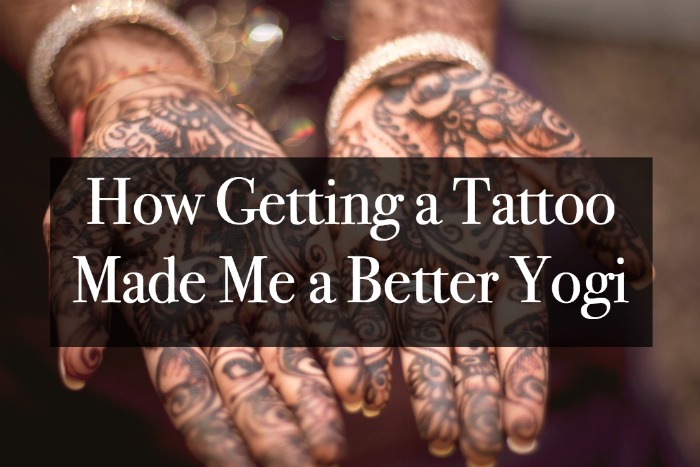 How Getting a Tattoo Made Me a Better Yogi

This isn’t exactly what you think. You don’t need to have a tattoo to be a yogi. There is no magical club of tattooed yogis that being a member of makes you better. But getting this tattoo was an experience that helped me see my practice better.

I’ve taken a few days off of yoga as my tattoo is healing. It’s been a while since I’ve gotten any new tattoo work done, and it’s the first since I’ve been practicing daily. It oozed more than I remember, but it’s also one of my largest and easiest to look at. So I was better able to see how it was healing. My previous tattoos have been primarily on my back, which makes it kinda hard to crane around and look at, so I couldn’t tell it was leaking, let alone lotion it easily. I took the decision to step on the mat day by day, but it was a week before I felt comfortable to do more than upper body stretches.

I had a flame tattooed on my ankle as a teen, an impulse decision that I have been unhappy with for a while. I wish I had followed my own rule and sat with my idea for at least a year. I found an idea for a lotus cover up that I had committed to for a few years, but then the artist at the shop offered to merge them together into an epically bad ass FLAMING lotus. Rather than hiding the old one, he helped it transform into its greatest potential, blending the old with the new.

More important to my tattoo making me a better yogi wasn’t just the transformation of the tattoo itself, but what I was able to observation after a week break from yoga: I don’t hurt as bad as I might have predicted if I had made a conscious plan to stop practicing for a week.

From that observation, I learned a few things:

My body is stronger than when I started.

I’ve been doing yoga for years, but my daily practice didn’t happen until I had the need for healing and ran out of money for chiropractic adjustments and physical therapy. I’d had an old chronic hip issue that hadn’t really recovered despite treatment, and a car accident that had me having splitting headaches from the neck pain. So I started Erin’s 30 Day Yoga Challenge. It was exactly what I needed to move my occasional practice to daily, which I had tried and struggled to do for years. I initially focused on yoga for pain management, and since then, my practice has grown to be more of a lifestyle/wellness choice. But I had this idea in my head that my pain was so big and constant, that if I didn’t do yoga enough, I would revert to a pile of aches and pains and have to start from the beginning. I didn’t believe my body had grown and strengthened. But now I know I am strong enough to have a break from my mat if I need to without guilt or fear of falling apart.

My practice is strong enough to miss a week.

While I have a daily practice, in no way am I a saint. I sometimes miss days, or only do a half hearted cat/cow and neck rolls to stay limber. But I have never missed such a large chunk of time before. When I miss, it throws my week off, because yoga is part of my self care. My fears for my practice were twofold. One was practical, that if I don’t keep my momentum, keep my habit of daily practice, that I might somehow lose it. Another deeper, maybe less rational fear was that if I don’t do it every day, I’m not enough of a yogi or a “real” yogi. But now I’m able to see that yoga is more about how I see myself and the world than being able to step on the mat. I’ll be listening to my body and what it needs, not trying to force myself to do what I think I should be to be a “good yogi”.

That’s why I love Bad Yogi. It’s a place of learning and acceptance, especially self acceptance. My goal is to find balance, to practice when I can and rest when I need to. This break allowed me to see I was trying to hold myself to an extreme when it wasn’t helping me. Yoga is supposed to help you, not confine you or be practiced out of fear. So while you don’t NEED a tattoo to be an awesome yogi, you might learn something from it.

Dancer. Yogi. Counselor. Hot Mess. I am always trying to find a balance in life and I have been described as disgustingly cheerful. (I take it as a compliment.) I blog about a variety of topics all loosely related to balancing the hot mess that is life. Follow me at balancingahotmess.com for more fun, random insights!