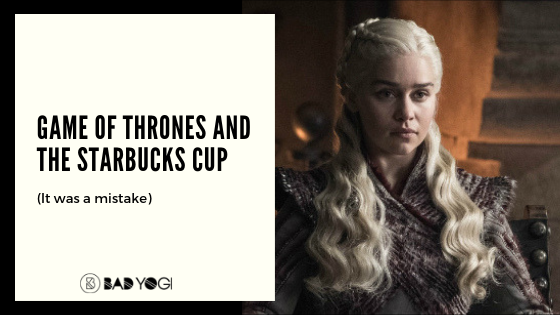 Game of Thrones and the Starbucks Coffee Cup: It Was a Mistake

Warning: This story contains spoilers for “Game of Thrones”

Anyone can make a mistake, even the producers of the biggest TV show ever. “Game of Thrones” fans are well aware of the fact that the final season of the very popular series is in full swing – and a lot has happened so far, including, it seems, the installation of a Starbucks in Winterfell. We can all go there now. Where there’s coffee, there’s life.

Fans are nothing if not attentive

You have to give it to “Game of Thrones” fans – they don’t miss anything, not even a blink-and-you-miss-it takeaway coffee cup standing on a table in what is a rather dark room. Sunday’s episode featured a scene where the survivors of the battle against the White Walkers are celebrating their victory. The coffee cup can be seen on the table where Daenerys sits in the scene where Tormund is praising Jon Snow’s heroics.

Twitter had a lot of fun with the mishap

Today reports that the internet soon exploded with screenshots of the scene in which the takeaway coffee cup can be spotted among all the characters drinking from goblets. Fans found the situation quite funny, and hilarious memes soon appeared all over Twitter.

Close up of that Coffee cup mistake in #GameofThrones pic.twitter.com/FighJzudwS

Winterfell really got the first Starbucks in history. Crazy. pic.twitter.com/abslRqwZKr

Some referred back to the previous week’s episode, which received some criticism for being too dark and that fans couldn’t properly see some parts of the battle between Winterfell and the White Walkers.

1. After last week's #GameOfThrones, the cinematographer had to fight off criticism that it was too dark and people couldn't see.

2. So this week he inserts an offending Starbucks cup into dark scene.

Some seemed a bit upset that the producers of the show could’ve let a mistake like that slip.

my favorite show in the entire world forgot a STARBUCKS COFFEE CUP ON THE TABLE WHILE FILMING pic.twitter.com/60z3pOCfg9

You're telling me they had TWO YEARS to put together a decent show and they couldn't even spot the goddamn Starbucks cup in Winterfell??!?! #GameOfThrones pic.twitter.com/8opg7nyydv

HBO admitted that it was a mistake

“In response to inquires from those who saw a craft services coffee cup in Sunday night’s episode of Game of Thrones, the latte that appeared in the episode was a mistake. Daenerys had ordered an [sic] herbal tea.'”

The latte that appeared in the episode was a mistake. #Daenerys had ordered an herbal tea. pic.twitter.com/ypowxGgQRl

They certainly know how to handle criticism. The cup has now been edited out of the scene. For those who hadn’t seen it, we feel sorry for you. You missed the first Starbucks cup to have ever existed in Westeros.

In the meantime, Time reports that the show’s art director for seasons 4-8, Hauke Richter, said that the error had been blown out of proportion because this kind of thing has never happened on the show before. And honestly, everyone makes mistakes, we shouldn’t be so hard on people when it happens. This team managed to pull off a massive hour and a half battle between our favorite characters and the White Walkers, dragons and all. Let’s give them a break.

Even Starbucks joined in the fun

Luckily, most people seemed to have enjoyed the little mishap, and now we have something else to remember from the last season. Even Starbucks joined in the fun on Monday, taking to Twitter to say that they’re surprised Daenerys hadn’t ordered a Dragon Drink.

It’s unknown who left the cup there in the first place. We bet all the actors are racking their brains to figure out whether it was them. In the meantime, let’s hope Starbucks makes use of the occasion and add some “Game of Thrones”-inspired drinks to their menu.

Did you spot the cup or did you miss it? Tell us in the comments!