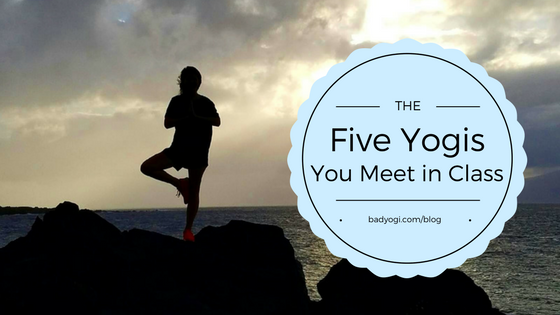 The Five Yogis You Meet in Class

As Bad Yogis know, yoga is for everyone. Still, if my local class is anything to go by, yoga seems to attract some people far more than others. Here are the five types of yogi that you’ve definitely met in class and how to get them on side.

You know the one. Turns up to class head to toe in Sweaty Betty, drops down to the splits as easily as if she was picking up a stray chicken nugget, will out-plank you any day of the week.

Catchphrase: “[Insert name of pose you break a sweat just thinking about] is so restful, you know?”

Deal with them by: Asking for tips on her headstand. I mean clearly they know something we don’t.

Inseparable on and off the mat, the idea of attending a class alone is as scary to these two as double pigeon after a long run. Whoever arrives first saves a mat space for the other one and every time they break into fits of laughter you’re convinced it’s about you.

Catchphrase: No words. Only giggling.

Deal with them by: Saying hello. If you can’t beat ‘em, join ‘em, right?

Always in situ at the front of class 10 minutes before the lesson starts, the teacher’s pet would rather miss their firstborn’s wedding than her weekly yoga fix. They’re the one you hear from first if the teacher’s running late: they have her on speed dial.

Catchphrase: [To the teacher] “I remember you saying when we met up…”

Deal with them by: Asking if she knows the class times over the holidays. She’ll be chuffed you’ve acknowledged her insider status.

Okay, okay, yoga is for everyone (one look at Adrien proves that!) but it doesn’t stop the token male in your class looking and feeling decidedly awkward.

Deal with him by: Bringing along a male pal. Help a brother out.

Wobbling unashamedly in tree pose and occasionally getting caught snoring through savasana, this yogi isn’t afraid to bend the yoga rules. Find her in the jazzy yoga pants.

Catchphrase: “Am I supposed to be feeling this in my [insert unexpected body part]?”

Deal with them by: Asking her to go for a drink after class, this one’s a keeper!

So there you have it, your run down of the types of yogi to look out for next time you hit the mat. Over to you! Have you ever felt massively out of place in class, or caught yourself being ridiculously smug when you finally nailed a tricky pose? Share your experiences in the comments below.