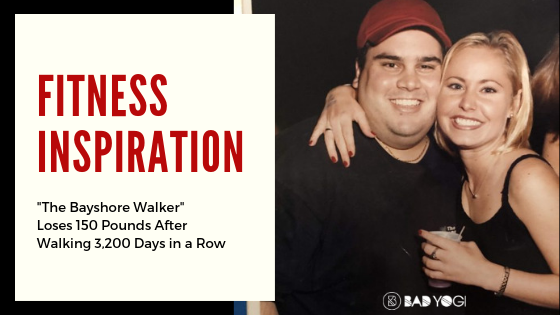 Fitness Inspiration: “The Bayshore Walker” Loses 150 Pounds After Walking 3,200 Days in a Row

We’re nearing the end of January and most of us are probably looking back at our new year’s health and fitness resolutions and realizing that we’ve slacked – again. It happens, and there is no reason for you to beat yourself up about it. Luckily, there are always people out there who can inspire us to do better, and Mister Adam Brown might just be the inspiration you’ve been looking for. 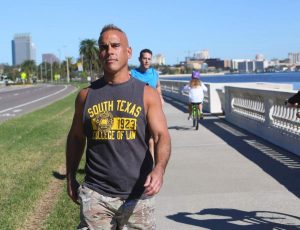 Who is Adam Brown?

If you live in Tampa, Florida, you might know of 42-year-old Adam Brown, also known as “The Bayshore Walker”, who has been walking along the scenic Tampa waterfront every day between 5:00 a.m. and 5:30 a.m. for 3,200 days in a row. This adds up to about nine years. Yes, sticking to a habit for nine years is entirely possible and Brown is proof of it.

The Tampa Bay Times reported that Brown walks five to ten miles per day at a pace of 5 mph and has lost an entire 150 pounds. But Brown wasn’t always this committed, in fact, he had to overcome a few obstacles before he finally decided to make it his mission to make his daily walk a habit.

Brown admitted that in primary school he was always the “big little kid”, and in high school he was known as the “huge kid”. Come college he was enormous and took on the role as the jolly overweight guy, serving as the “keg master” at parties. Despite being the jolly guy, he was mocked because of his weight and eventually started to either skip class or arrive extra early so his fellow students wouldn’t see him squeezing between the desks. Because of this, his grades suffered and he dropped out of college in January 1999. Looking back, this was what led to the turning point in his life. 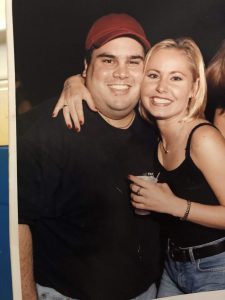 In the 1990s, Adam Brown weighed 300 pounds. That’s twice what “The Bayshore Walker” tips the scales at today. [Courtesy of Adam Brown]

Having dropped out of college, Brown didn’t have much to keep himself busy with, so he started picking up some weights. After a few months, he moved back to Tampa and to his surprise found that he had lost 13 pounds without putting in a massive effort. It was the first time in his life that he’s ever lost any weight, and he liked the feeling.

Fast forward to May 2000, Brown started his daily walking regimen, managing 67 continuous days before a storm interrupted his daily walk. After that, he started up again, managing 45 days. His strike of 3, 200 days officially started on April 25, 2010. He even continues his walking when he’s on holiday, planning out a route beforehand that is more or less the same as the one he walks at home. He also doesn’t ever go to the gym, although he does make a point of lifting weights for about 40 minutes a few times a week.

You’re probably wondering what kind of diet Brown is following along with his daily walking regimen. It’s quite simple really – he doesn’t. He made it clear that he doesn’t believe in diets. He eats everything he likes, including junk food, and doesn’t restrict these treats to cheat days.

Feeling better about himself and his lifestyle, Brown plucked up the courage to finish his studies, obtaining a degree in psychology from the University of South Florida and graduating from the South Texas College of Law.

Looking back, Brown admits that he had never thought his transformation possible. Being overweight for most of his life, he didn’t think losing as much weight as he has was possible – but he did, cutting his weight from over 300 pounds to 150 pounds. Having managed this, he is determined to inspire others to do the same.

Brown’s advice to anyone looking to make exercise a habit is simple: “Don’t wait for the perfect day. Don’t do it because of a resolution. Just go. Start right now.”

Well, there you have it. Starting a healthy habit doesn’t have to be hard and you don’t have to push yourself to your limit every day at the gym. Starting with something as simple as a daily walk and sticking with that can give you newfound confidence while still providing you with the health benefits. What are you waiting for? Today is as good a day as any to start making better choices.