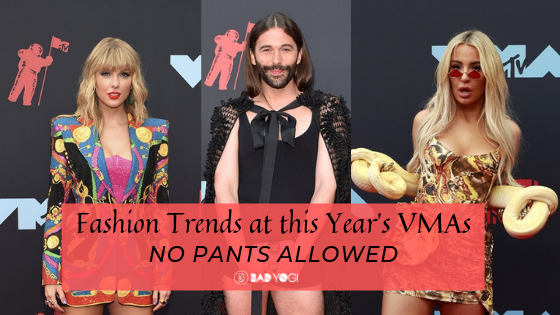 Fashion Trends at this Year’s VMAs: No Pants Allowed

Award show fanatics, and anyone who was rooting for Taylor Swift’s You Need To Calm Down song at this year’s VMAs, would know that it was a night of stunning fashion trends. The VMAs are known for its hot red carpet looks, and this year was no different. What was different was the choice of clothing. It seems that some sort of memo went out that said “no pants allowed”, and some seemed to have embraced the trend, while others (like the Jonas Brothers and Shawn Mendes) decided to sit this one out – to our great disappointment.

In case you thought that we were kidding, we’re not. Well, not entirely. People were not walking around half-naked. According to Today, this trend is actually called lampshading, and it basically means you wear tight, thigh-high boots along with an oversized sweater or dress. Think of every outfit Ariana Grande has ever worn on stage – it’s almost like that. Did she perhaps start this trend? We don’t know. What we do know is that a bunch of celebrities embraced it and came up with some pretty cool looks. Most walked the red carpet with bold blazer dresses that demanded attention. Well, we don’t mind looking. 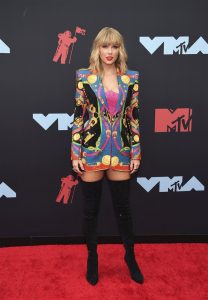 T Swift did, as usual, not disappoint. Her Versace beaded blazer made heads turn, thanks to its bold patterns and bright colors. We can all probably agree that those boots are to die for. Does anyone know where we can get a pair at a discount? 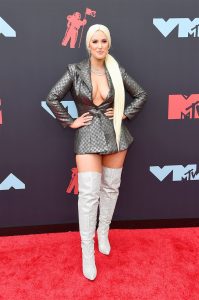 Friedman, known for her hilarious impressions of celebrities like Cardi B (which, by the way, recently cost her 1 million followers on Instagram), was also donning the lampshade look. She went for less brightness than Swift with a grey embossed blazer with a low neckline paired with silver thigh-high boots. So many awesome boots over here. 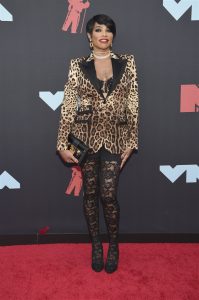 From the hip-hop group Salt-N-Pepa, Pepa, 52, walked the red carpet in a similar lampshade look than Swift and Friedman, but her look was adorned with leopard print, and she did wear pants, well, tights. And we like tights. Nice one, Pepa. 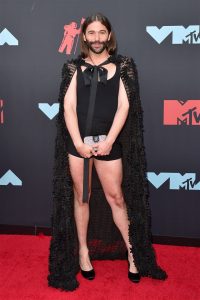 Van Ness might not really have lampshaded, but he came pretty close, and quite honestly, we love this look. He was the only one who actually went completely pant-less with no thigh-high boots, and we respect that. Also, can we just all take a moment to appreciate how cool that cape is?

Dresses to impress us

There were also those who looked absolutely stunning in jaw-dropping dresses, like Lizzo and Camila Cabello. And, of course, the guys didn’t let us down either. 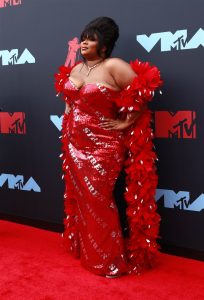 Lizzo stunned with an amazing red dress that channeled her inner siren – literally. Paired with a flamboyant feather boa, the dress actually had the words “siren” printed on it. This is probably one of the hottest looks that were seen on the red carpet this year.

Camila Cabello was looking like a goddess in an elegant white dress with a dramatic train. We love this look. 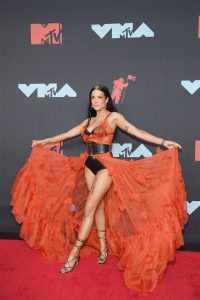 Halsey turned heads with her dramatic orange dress paired with a black bodysuit underneath, but what people really seemed to notice was her rainbow-tinted roots. We like ’em too. 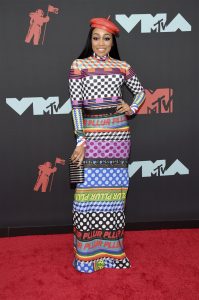 The Angel of Mine singer was impossible to miss with her colorful, printed dress. We’d vote for this one as the most unique dress on the carpet. The red beret also added a nice touch to the whole outfit.

We love a good suit 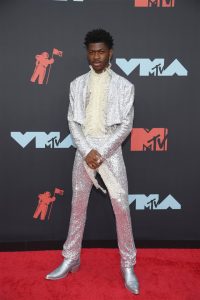 Lil Nas X was probably the most flamboyantly dressed guy at this year’s awards. You don’t need much more than a sparkling suit to stand out from the crowd. 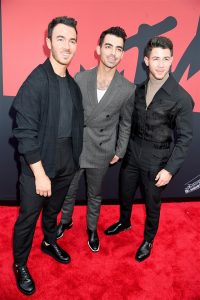 The Jonas Brothers were donning classic suits – no fancy stuff here, and we can’t argue that they looked hot. Let’s all take a moment to appreciate the fact that these guys are back and making music again. 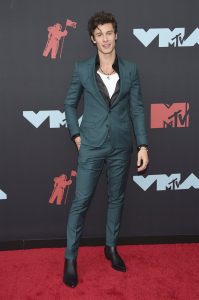 Mendes took the same route as the Jonas Brothers, rocking a teal suit and his famous perfectly imperfect hairdo. Why can’t we all look that good with messy hair? Why? 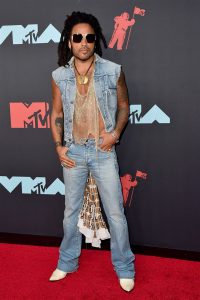 Kravitz was the definition of cool and casual, dressed all in denim with an added bit of sparkle.

The former ‘N Sync member stood out in a pink suit and lavender hair, paired with white sneakers. We don’t know about you, but we like what we’re seeing here.

The best-dressed in the “weird” category

Then, as with all award shows, there were those who decided to go with the weird option. 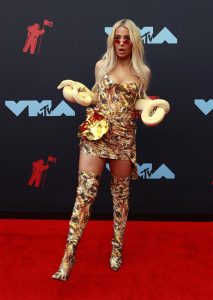 YouTube star Mongeau was the spitting image of Britney Spears, bringing a live snake to the carpet as an accessory. Whether the snake felt at home is unclear, since Harry Potter wasn’t around to translate. 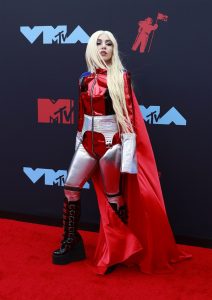 Off to save the world? Ava Max looked like a superhero from the future in this bold outfit, along with some cool makeup to complete the look. Can we just take a moment to appreciate those shoes?

The night ended off with the “video of the year” award, which went to Taylor Swift for You Need To Calm Down, the LGBTQ anthem she released back in June. 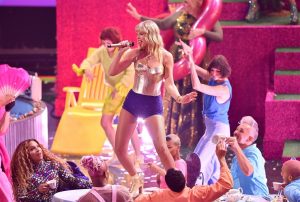 This song also won the award for “video for good”. Swift delivered a touching speech upon receiving the award, making her voice heard on providing equal rights to all, no matter who they are or what their sexual orientation is. “In this video, several points were made. You voting for this video means you want a world where we [are] all treated equally regardless of who we love and how we identify,” Swift said in her speech. She also took the opportunity to plug her petition for the Equality Act, explaining that it “basically says we all deserve equal rights under the law.” Yes, we can get behind that.

With all its amazing and weird outfits, showstopping performances, and somewhat strange choice of winners in some categories *cough* High Hopes by Panic! At the Disco has never been a rock song *cough* this year’s VMA’s pretty much delivered everything we were expecting and more. We can’t wait to see which piece of clothing they’ll take away next year. 😉

What did you think of this year’s VMAs? And do you think the lampshading look is cool? Drop your thoughts in the comments.