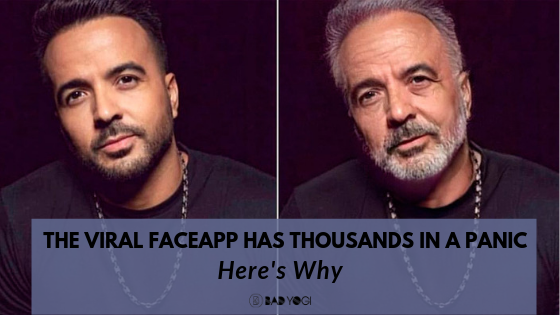 The Viral FaceApp Has Thousands in a Panic – Here’s Why

If you’ve been on Instagram or Facebook at all this week, you might have noticed that all your friends have aged considerably in the last couple of days. This is all thanks to the FaceApp, which allows you to take a glimpse into the future to see what your older self will look like. We all want to know certain things like, will we still be hot? Will we still look like ourselves? And as a result, the app has gone viral, but it might not be as innocent as you think.

What’s all the fuss about?

According to ABC News, the FaceApp uses AI to change your face into its older version. This is not the first time the app has gone viral – it was massively popular in 2017 as well, but this time around, it seems to be doing an even better job of making you look old and grey. Thousands of people and celebrities took to their social media accounts to showcase their older selves, and according to NPR, the Rusian-based app had topped Apple and Google’s app download charts.

OLD TERRY CAN STILL KICK SOME ASS! 🤣😂 I did that face app thing y’all been TELLIN ME TO DO! #AmericasGotTerry #AGT pic.twitter.com/gFUC1a1l0b

People have expressed concern over the app’s true intentions

So, why is the app making the news? Well, a lot of people have expressed some concern over what the app’s true intentions are, with Democratic Sen. Chuck Schumer even calling for a federal investigation into the Russia-based company, Wireless Labs, that created the app. According to Schumer, the app poses national security and privacy risks to millions of American citizens.

Because millions of Americans have used it

It’s owned by a Russia-based company

And users are required to provide full, irrevocable access to their personal photos & data pic.twitter.com/cejLLwBQcr

Yikes. Okay, so none of us thought that the app had bad intentions, but now a bit of hysteria regarding the app has spread all over social media, and people are worried about what the company is going to do with their pictures that they so willingly and excitedly uploaded.

According to Vox, people really became panicked when they realized that the agreement they so hastily tapped “I agree” to, had basically told them that they are allowing the app to access their entire library of photos. The agreement reads as follows:

“You grant FaceApp a perpetual, irrevocable, nonexclusive, royalty-free, worldwide, fully-paid, transferable sub-licensable license to use, reproduce, modify, adapt, publish, translate, create derivative works from, distribute, publicly perform and display your User Content and any name, username or likeness provided in connection with your User Content in all media formats and channels now known or later developed, without compensation to you.”

lol this #FaceApp is crazy! pic.twitter.com/4HrR50V7e7

It seems that we actually have to start getting into the habit of reading an app’s terms of service. Reading it on Twitter after you’ve already used it is of little use. But why are people really panicking? Well, it’s been revealed that the app apparently stores your pictures for future reference, and the people who used it basically gave the app permission to use their pictures however they please. 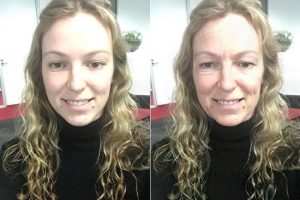 People took to the app like moths to a flame, not pausing to think about what might happen with their pictures after.
Image: FaceApp

The pictures people upload to the app first go to Amazon servers in the US and Australia, and after that, it can be accessed by the app’s Russian parent company, Wireless Labs – and they can do with your picture whatever they please, thanks to the agreement you so hastily signed without reading a word. We get it, you were eager to see your wrinkles. We’re only human.

What exactly did you give the app permission to do?

According to lawyer Elizabeth Potts Weinstein, by signing the app’s agreement, you basically gave them permission to do things with your face that you won’t necessarily like. “You are giving them a license to use your photos, your name, your username, and your likeness for any purpose including commercial purposes (like on a billboard or internet ad),” Weinstein says.

If you’re properly scared now, wondering if you’ll see your face photoshopped into some ghastly picture or ad, Elise Thomas from the Australian Strategic Policy Institute says that you don’t really have to worry about that. Your face will most likely be used to train facial recognition software. Well, that’s comforting, thanks.

This is not the first app of its kind

This is not the first time this has happened – Microsoft did something similar with the Guess My Age app, but once Americans heard that Russia is connected to the app, they started to panic.

You can’t blame people for panicking. Just look back at 2016, when Cambridge Analytica used a viral quiz on Facebook to collect data from a wide range of users in order to eventually target them with anti-Democrat propaganda in the period leading up to the 2016 US elections. So, naturally, people are concerned that something similar might happen. Some Twiter users speculated that the pictures people upload to the app could be used to create “deep fakes”. This refers to instances where images of real people are digitally altered and then spread around as the real deal. One user tweeted, “You can look forward to seeing a deep fake pornographic video of yourself in your newsfeed doing things you’d never do.” Of course, all the talk about what could possibly happen to people’s pictures caused a bit of a panic.

Do people have reason to be panicked?

Now the big question comes: Is the hysteria valid? According to Thomas, people are overreacting. “Any photo that you put on the internet could be used to create a deep fake. The terms of service for FaceApp are no more invasive or egregious than any other big company you have given your photos to. You’ve already given your images to Facebook, to Snapchat, to Tinder, to everyone,” Thomas says. 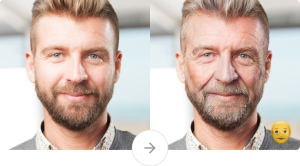 The app has gotten considerably better at making people look like their future, older selves, making it even more appealing than it had been back in 2017 when it was initially launched.
Image: FaceApp

James Arvanitakis, a professor from the University of Western Sydney, agrees with Thomas, saying, “We need to scrutinize the privacy settings behind FaceApp, but also behind all apps, especially the ones we use the most. Compare Facebook [nearly 2.5 billion monthly active users] to FaceApp’s 100 million. Facebook has facial recognition tech on all photos. Instead of being reactionary to the most popular apps, which come and go, we need strong government policy and broader awareness of the privacy issues with everything we use online.”

There’s no arguing that  Arvanitakis has a point. He also added that small companies like the one behind FaceApp aren’t necessarily riskier than Facebook, in fact, the big companies are equally as risky. “Most free apps exist to collect data. If the app is free, then you are the product,” he concludes. That’s scary, but it’s true.

According to The Guardian, a French security researcher that goes by the pseudonym Elliot Alderson ran a full check on the app after the widespread panic and  confirmed that even though some people were concerned that the app would upload their entire camera roll, it just uploads the image the user is modifying, which is what you expect an app like this to do. Alderson also said that there’s no evidence that the app is actually stealing your data – the only data it gathers is your device ID and device model, which is something apps like this normally do. Alderson says that the reason the app is really causing such a fuss is that it’s made by a Russian company. That’s it.

Everything’s going to be all right

So, if you succumbed to the temptation to see yourself as an old gentleman or lady, fear not – the world is not going to end just yet, and you won’t be hunted down by crazy people who didn’t like the look of your face when you uploaded the picture. Yeah, sure, that image is possibly going to end up being used to train facial recognition software, but it’s probably nothing that Facebook isn’t already doing with your pictures already.

Do we need to be more mindful of what we put out there? Absolutely. But it won’t do any of us any good to fret over what could possibly happen to the images we’ve already uploaded onto the internet. All we can do is to be more careful in the future.

Have you used the FaceApp? Do you think people are overreacting because it’s a Russian company? Let us know your thoughts in the comments.