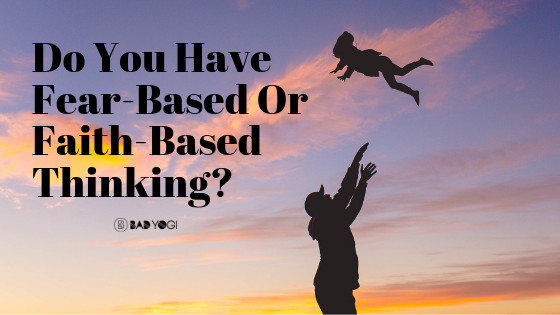 Do You Have Fear-Based Or Faith-Based Thinking?

Turn on CNN or BBC or Fox News. This isn’t about your political affiliation because every station will be showing the same thing: bad, negative, fear-based stories 95% of the time.

Top stories on CNN as of this writing:

Here’s Why There’s Rising Tension Between the U.S. and Iran
Trump Should Be Impeached, Republican Congressman Says
Man Dropkicks Arnold Schwarzenegger (No, I didn’t make this one up!)

Top stories on BBC as of this writing:

Reading this day in and day out you would be forgiven for thinking we’re headed towards the end of the world, or at least a pretty heavy apocalypse.

We Are Taught To Fear The World

Last month, I received an email from a tour company asking if I wanted to go to Israel and Jordan. Upon reading this, I swiftly emailed back, “as long as you’re paying!” I assumed it was just a joke or some type of spam like that email I’m always getting from a Nigerian prince who so desperately needs cash. To my surprise and utter astonishment, I received a reply saying they would of course be paying for everything including round trip air fare and that it was a press trip. I almost fell off my chair!

However, when I told people around me, their first response was “Israel and Jordan? But it’s so dangerous there! What if your hotel gets bombed or a terrorist attack happens?!” It didn’t occur to them that we had more terrorist attacks in Europe in recent years, but it was the media who had given people this idea that these countries were too dangerous to traverse on a tour bus.

We’re all aware of the fact that the media perpetuates stereotypes and wants to churn up a story to get viewers who are constantly on the lookout for negative goings on in society. It’s not just more serious news channels, it’s also celebrity gossip. Kate Middleton and Meghan Markle apparently hate each other! Lindsay Lohan is back in rehab! Justin Bieber is having a nervous breakdown and his marriage is crumbling!

Our lives run on negativity, fear being the fuel.

We are constantly on alert, waiting for something bad to happen, waiting for the other shoe to drop, apprehensive when something good happens, thinking it’s too good to be true.

I just started a new writing job that was pretty big for me, and from the day before the interview I was constantly worried it wouldn’t work out. I assumed they wouldn’t pay me as much as I wanted (spoiler alert: it was 3 times more than what I had hoped for!), I assumed the contract wouldn’t work out, I assumed I wouldn’t get the articles I wanted, and I’m constantly assuming they will hate my work as time goes on and fire me. My mind is always looking for reasons it’s not going to work out, and I realized fear-based thinking was taking over, sucking out all the excitement I had.

It would be fantastic if we could control the outcome of everything, and get concrete answers about what the future holds, but this is where faith-based thinking comes in. We have to learn to let go, surrender, let the universe do its job, and stop pushing. Not sure if you have allowed the universe to take over? If you’re stressed about the future, then that is your indicator.

My husband and I recently started trying for a baby again after a miscarriage at 6 weeks and a stillbirth at 18 weeks. We’ve wondered how long it would take to get pregnant again, we’ve agonized over how many weeks I’ll have to be before we can tell anyone next time, we’ve worried and stressed over whether or not we will have another stillborn. It’s the most vulnerable we’ve ever allowed ourselves to be.

I’ve realized I cannot control when I will get pregnant and what will happen once I am. Stressing about it, and fearing the worst will only take away from the joy and happiness one experiences when that test turns positive, when that ultrasound shows a heartbeat, and when a beautiful baby is born healthy. When you surrender and stop pushing, you allow the universe to do it’s work. It’s the difference between having your shoulders high and tense, and allowing them to drop and relax after a long day (whiskey in hand.)

Most of us have heard about the law of attraction by now; visualization and belief that you will get what you desire. You can make a Pinterest board, write it down, or mentally visualize it every day but the deciding factor in whether or not something will work out is your faith. So, what is faith-based thinking?

I’m always reminded of that movie The Santa Clause when Charlie gets a snow globe and the head elf tells him, “Seeing isn’t believing, believing is seeing.” Who knew a Disney movie would be so ahead of its time? This is exactly what faith-based thinking is. It’s not needing to see concrete evidence or have a 100% guarantee that something will work out before you take a chance on it.

When I was growing up, my parents were constantly worried about money; they went bankrupt, and every time my dad would buy something extra my mom would tell him they were “on a budget.” To this day, they constantly talk about the price of their dinner, the price of their apartment, and don’t allow themselves to buy things because they never stop worrying about whether or not more money will come. This fear is what keeps money away!

We must spend money, in order to get more because we are proving to the universe that we truly believe money is coming to us in the future. Not only that, but you must give in order to receive. Treat a friend to dinner, buy your mom something nice; spend money on other people, and it will come back to you two-fold.

How do you practice faith-based thinking?

In this very moment, in the present moment you find yourself in, you are okay and you have something to be grateful for. How about the fact that you can read this right now?

2. Let go of your thoughts, they are not you

We assume that our soul is made up of every thought we have. Thoughts are simply your brain firing away, they are not your higher self.

3. But, be aware of what your thoughts are saying

Our sub-conscious thoughts have a profound affect on our mood and energy, therefore our life. With practice, you can change your thinking patterns when you take the time to recognize what they actually are.

4. Acknowledge your fears and ask yourself why you have them

It’s not enough to just pay attention to your thoughts, you must go deeper. What are your fears and where do they come from? It helps to go back to your childhood and think about the way you were raised, or how your peers might have affected you in high school. Did you have any relationships with people who changed how you see the world in a negative way?