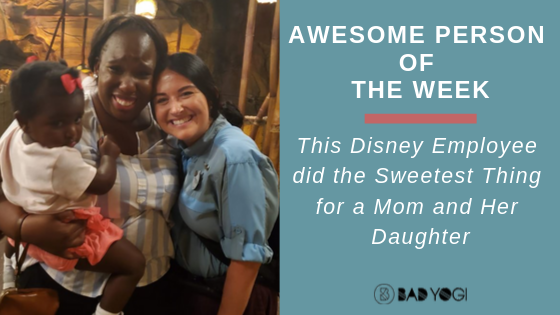 Awesome Person of the Week: This Disney Employee Did the Sweetest Thing for a Mom and Her Daughter

Anyone who is a parent knows that when it comes to your kids, you would do anything for them. Attorney Jessica Thomas is no different, and that is why she was willing to go on some rides with her kids, Julia and David, at Disney‘s Animal Kingdom, even though she has terrible claustrophobia. When that phobia got the best of her, someone was ready to step in and now this amazing story has gone viral.

Going on an unplanned vacation

Thomas and her family evacuated to a Disney hotel to escape Hurricane Dorian. It wasn’t exactly a vacation, so she had been planning on working the whole time, but her kids really wanted to go on rides. In the end, Thomas decided that she would make their trip memorable. She agreed to the whole affair knowing that rides terrify her, but she didn’t want to spoil the fun for her kids. She told Today that she’s been claustrophobic her whole life: “I hate rides, I really do. I’ve been claustrophobic my whole life. It stems from all sorts of crazy things — being trapped in an elevator once … but it definitely is a harder experience now that I have kids.”

Thomas and her family visited Disney’s Animal Kingdom after evacuating their home in the wake of Hurricane Dorian.
Image: Disney

Trying to be brave for her kids

Thomas did okay on the first ride. She and her daughter started off with a safari ride, which was alright until the doors closed. Thomas really wanted to run for the exit but managed to get through it by riding in the handicapped space. The second ride, which was the Na’vi River Journey indoor boat ride based on “Avatar”, was the one that really terrified Thomas, because it goes through a “cave”. Thomas found herself panicking the second she got on the ride, saying that she found it super scary. “It is a scary, tight cave. I was terrified, and, just, I couldn’t. I tried to get off; Julia starts crying. … This is something beyond my control, and it makes me feel horrible that I am not able to do something for my kids.”

Thomas had to get off the ride and was heading towards the exit in tears when she ran into Samantha Burns, who is a Disney employee. Burns asked her what was wrong and then offered to take the ride with Thomas and her daughter.

Thomas admits that it took a lot of courage to get back on the ride, but she decided to give it a try. She allowed Burns to help her get comfortable before the ride started and was offered some details on it to help make it seem less scary. Thomas was very surprised by Burns’ kindness and willingness to help, saying that it never even occurred to her to ask Burns to take the ride with her: “It did not even occur to me to ask that. You wouldn’t think — I’m sure my husband would be like, I could have rode with you, I was with you! But it was different, how she said it. So I’m like, ‘OK,’ and I asked — and I know she was probably like, ‘This weird lady’ — I’m like, ‘Can I hold your hand?’ And she’s like, ‘Yes!’ She did not skip a beat.”

Getting through the ride

Burns held Thomas’ hand for the duration of the ride, showing her relaxing details, like the fact that the water was actually not deep at all, and pointing out the closest exits. At the same time, Burns also managed to entertain Thomas’ daughter, Julia, pointing out all the exciting things on the ride as they went. Thomas couldn’t believe how good Burns was at multitasking the whole time. “She’s like, ‘Look, Julia!’ and then at the same time, ‘Are you OK? Are you OK? How are you doing? Just amazing, all that support. … I am a family law attorney. I deal with people’s emotions all day. All day, I deal with emotions and calming people down and walking them off the ledge … so to have someone doing that for me was just indescribable.”

Sharing an act of kindness

Thanks to Burns, Thomas made it through the ride without panicking. After it was all over, they took a picture with her, which Thomas later shared on Facebook. She thanked Burns for her kindness and help. Her aim with the post was to get Burns the recognition she deserved. “I wanted Samantha to get recognition. The second reason I put it on and went into detail was I was hoping another mom could see it, and not feel bad like I do, all the time, when I can’t get on the ride.”

The post went viral in no time, and Thomas actually managed to reconnect with Burns over Facebook Messenger. Burns thanked her for her kind words and said that being able to help people is the reason she works at Disney. If she could make even the slightest impact, it was worth it.

You’re braver than you think

Thomas says that a lot of people reached out to her after she posted that picture. Many were moms who offered their support and encouragement. One of the comments read, “You left out the part where you had the courage to get back on the ride, and showed your daughter that you can face your fears.”

What Burns did for Thomas and her daughter is amazing. And what Thomas managed to do, getting back on that ride even though she was absolutely terrified, should serve as an inspiration to us all. It is possible to overcome your fears, sometimes you just need a little help to do so.