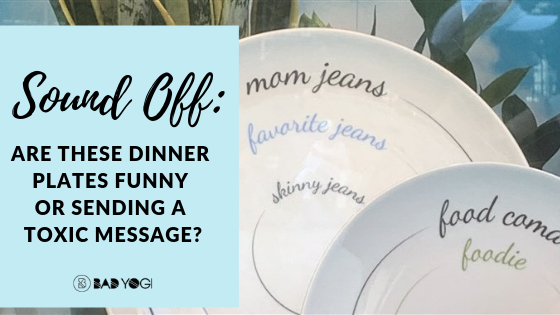 Sound Off: Are These Dinner Plates Funny or Sending a Toxic Message?

Portion control is very popular right now, and it seems that companies are taking note and trying to incorporate some fun and humor into it. Or, at least, that was the intention when Macy’s and Pourtion collaborated on a set of what was supposed to be humorous dinner plates. Things quickly went south when people started to point out that it was a form of fat-shaming and sending the wrong message to those already struggling with eating disorders.

Dinner plates with a message

As usual, it all started with a tweet. According to Today, podcast host Alie Ward tweeted a picture of the dinner set with the caption “How can I get these plates from @Macys banned in all 50 states.”

How can I get these plates from @Macys banned in all 50 states pic.twitter.com/1spntAluVl

The reason so many people were upset? Well, the now infamous plates feature three concentric circles that outline different portion sizes. The smallest circle is dubbed with the words “skinny jeans”. The second biggest circle reads “favorite jeans” while the largest circle reads “mom jeans”. In short – the plates seem to say that if you want to fit into your skinny jeans, you better eat that smaller portion. That’s not the best message to send in the times we’re living in. There were also smaller appetizer plates with the same design, but these featured the words “foodie” and “food coma”.

People were upset by the message it sent

Ward’s tweet went viral pretty fast – and many agreed that the plates’ message was in poor taste, saying that it’s sending the wrong message to those who already struggle in their relationship with food. One person replied, “This is a toxic message, promoting even greater women beauty standards and dangerous health habits.” Another wrote, “The issue is that it’s perpetuating the messages that a) you’re only attractive if you can wear skinny jeans and b) the only way you can wear skinny jeans is to eat tiny amounts. Neither message is true and just promotes poor body image and eating disorders.”

Macy’s removed the plates from its stores

Macy’s noticed the backlash, and replied to Ward, saying that they admit that they missed the mark with the product and will be removing it from stores.

Hi, Alie — we appreciate you sharing this with us and agree that we missed the mark on this product. It will be removed from all STORY at Macy's locations.

A spokesperson for the company apologized to the customers they’ve offended.

“We apologize to our customers for missing the mark on this product. After reviewing the complaint, we quickly removed the plates, which were only in our STORY at Macy’s location in Herald Square.” 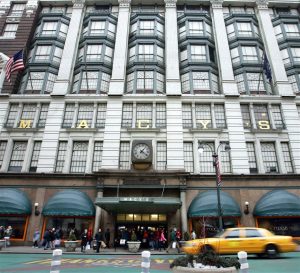 Pourtions explained the meaning behind the plates

Pourtions, the company that designed the plates, also released a statement, apologizing and saying that it was supposed to be a lighthearted approach to portion control.

“As the creators of Pourtions, we feel badly if what was meant to be a lighthearted take on the important issue of portion control was hurtful to anyone.”

Pourtions’ main focus is actually to provide customers with the tools to help them with portion control, but doing so in a fun and humorous way. Their mission statement on their website supports this, reading as follows:

“From the corner donut cart to Big Gulps to all you can eat and drink buffets, portions have gone through the roof. This initial inspiration led us to design a conceptual line of tableware that deftly mixes social awareness with a humorous nudge in the right direction.”

In addition to that, the company also states that they want to support healthy eating and drinking: “Everyone who has appreciated Pourtions knows that it can be tough sometimes to be as mindful and moderate in our eating and drinking as we’d like, but that a gentle reminder can make a difference. That was all we ever meant to encourage.”

Some loved the plates

Some customers actually agreed with this. After Macy’s revealed that they were removing the plates from stores, many who actually found some humor in the design were pretty upset. One person tweeted, “I LOVE those plates, where can I buy a set before you remove them? Don’t pay attention to people with no sense of humor!!!”

@Macys I would purchase pourtions mom jeans plates if you would bring them back. I am sure many other people would also. I wear mom jeans. I am not offended (like majority of normal fun loving people). Are you getting rid of the rest of the offensive plates? REALLY??? pic.twitter.com/iCVWKKW4Px

Many seemed to agree that people shouldn’t take these kinds of things too seriously. That debate, of course, is an ongoing one.

Pourtions is still selling the plates

Even though Macy’s is no longer selling the plates, they are still for sale on Pourtions’ website and some other retailers. The Cassidys, who are the founders of Pourtions, says that even they use the company’s plates and glasses to remind themselves to take their own advice, adding, “We know this is serious business. We also believe a touch of humor can, for some, be just the right touch.”

Funny or sending a toxic message?

So, are these dinner plates super offensive or a playful tongue-in-cheek approach to making sure you don’t overeat? Well, we’d say that it’s probably a bit of both. It could’ve worked great if they took a different approach. The portion sizes don’t need to be measured by a jean size – there are hundreds of other options. They could’ve given the circles cheeky names, like “not that hungry today” for the smallest one, “Give me some food!” for the middle one, and “Bordering on hangry right now” for the big circle. That would’ve been more fun and playful without hurting anyone’s feelings. Everyone would’ve known that it was a sly way of applying some portion control, but at least most people would’ve been able to laugh at it with their friends over dinner.

Companies need to think these things through

These kind of things are always a bit tricky. For those who already struggle to maintain a healthy relationship with food, these dinner plates could be a trigger. The jean sizes were not a good idea when you take the majority into account. We have to admit that eating disorders are real and that there are people out there who are really struggling. Just seeing those plates on the internet could already be hurtful to some. It’s important to always take a step back and think about how your product will affect people. Companies like Pourtion could easily bring about positive change if they really put some thought into their designs.

Over to you: What are your thoughts on this? Are the plates sending a toxic message or are people being too sensitive? Drop your thoughts in the comments.