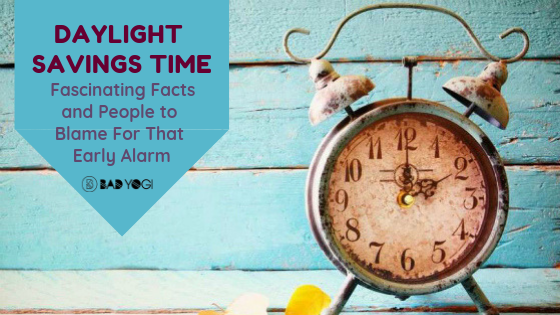 Daylight Saving Time: Fascinating Facts and People to Blame For That Early Alarm

Ah, daylight saving time… We love to hate it. It sucks to get up an entire hour earlier than usual, but with the pesky clocks jumping forward we’re also filled with excitement about summer finally approaching. The days are getting longer and warmer and winter is finally taking some leave. While you might be cursing a bit because your Monday seems extra Monday-ish with the time jump, a few interesting facts about daylight saving time might cheer you right up.

First off, when the concept of daylight saving time first originated, it was actually meant as a joke. Yeah, we know that’s not making you feel any better right now, but bear with us. According to Mentalfloss, Benjamin Franklin first proposed the concept in a satirical essay published in 1784. We know what you’re thinking –  it was a satirical piece so daylight saving time must have been meant as a sarcastic joke. It was a joke with an impact though because a century later daylight saving time was implemented for the first time in major countries. In the essay, Franklin seemed to think that forcing people to get up earlier will force them to go to bed earlier and get those much-needed eight hours of sleep:

“All the difficulty will be in the first two or three days; after which the reformation will be as natural and easy as the present irregularity […] Oblige a man to rise at four in the morning, and it is more than probable he will go willingly to bed at eight in the evening; and, having had eight hours sleep, he will rise more willingly at four in the morning following.”

Get up at four in the morning? Was this guy serious? How could anyone ever think that this was a good idea? And those of us who are full-time night owls know full well that those eight hours will elude us no matter how many hours the clock jumps ahead.

We can hear Franklin laughing at us from beyond the grave.
Image: NY Post composite/Mike Guillen

Franklin’s bright ideas didn’t end there – he actually pitched the idea as a money-saver. Back then, people would’ve saved candle wax instead of electricity if they went to bed earlier. To enforce this plan, Franklin suggested rationing candles, taxing shutters, and banning non-emergency coach travel after dark.

The funniest idea was probably the one where he suggested firing cannons at sunrise to wake those who are still asleep. Yeah, waking up to the sound of a cannon shot is a one-way ticket to having a very bad Monday. And Tuesday. It will be a bad day every day. It will be a bad week – period. You might want to forgive Franklin for his way-out ideas – it is said that he may have originally written the essay to poke fun at the French for being lazy. Well thanks, Franklin. Now we’re all suffering. He also wrote that the amount of sunlight that goes wasted each morning might come as a shock to those who “have never seen any signs of sunshine before noon.” We would have liked Franklin to take note of the fact that most of us do “see” signs of sunshine before noon – we just prefer to do it with our eyes closed, thank you very much.

Actually, it’s a bug collectors fault that you’re “officially” getting up an hour earlier

It seems that there are plenty of people to blame. The first “serious” case for daylight saving time came from an entomologist who worked at a post office by day and would do most of his bug hunting at night after work. He became frustrated by how early the sun set in the summer and suggested springing the clocks forward, which would allow for more daylight to collect bugs, along with other evening activities. The clocks would then be switched back during the winter when humans and bugs don’t spend as much time outside. Seriously? We’re getting up an hour earlier because some guy wanted to catch bugs? Is this for real?

The idea was originally rejected after it was proposed to a scientific society in New Zealand in 1895. The reason for the rejection was that it was pointless and overly complicated (finally something we can agree with) but two decades later, daylight saving time was implemented across the developed world.

Germany, Britain, and many other European countries started to adopt daylight saving time during World War I to conserve coal. America only adopted the time change a year after entering the war to save electricity. After the war was over, the US dropped the time change. It was reinstated in the 1970s during the energy crisis to save electricity during the winter months. This sparked outrage from parents having to send their kids to school before sunrise. We feel their pain.

DST is affecting your health

We knew it! Numerous studies have shown that the extra hour of sleep that gets lost during daylight saving time can affect people in dangerous ways. Some of the health risks include an increased risk of stroke and heart attacks as well as susceptibility to illness. We have to add that this can, of course, be avoided by making up for that hour by going to bed earlier *sigh*.

DST is not a nationwide thing in the US

Even though daylight saving time pretty much covers most of the US, there are certain states that enjoy the same time on their clocks all year round. If you’re desperate to get away from this “everything is an hour earlier” thing, consider moving to Arizona. Not exactly desperate for more sunlight, most of the state skip the time jump, except for the Navajo Nation. We will never know why they’d like to get up an hour earlier. Crazy people.

The starting time is super weird

Midnight is a magical time when everything changes – always. Just look at all the Disney films – everything always happens at midnight. Except for daylight saving time. For some weird reason, it starts at 2:00 a.m. Apparently, the time delay is due to the fact that most people will be asleep by the time it happens and won’t notice it. Workers with early shifts will be asleep and most bars and restaurants will be closed. Can we just take a moment to appreciate the logic here? The change happens at 2:00 a.m. because then people won’t notice? When that alarm clock goes off an hour earlier than usual we’re going to notice it alright, no matter when the change happens.

All in all, daylight saving time sucks for most of us – but look on the bright side, you’ll be able to shed those winter clothes pretty soon and when you do, you’ll probably appreciate the hour of extra sunlight at the end of the day. Just saying.