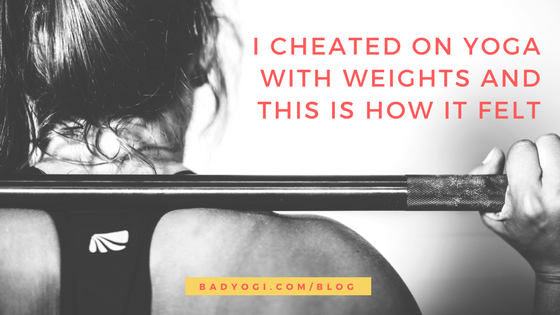 I’ve been around the block a few times as far as exercise regimes are concerned. I’ve dipped a toe into Dance, spent a few nights with Boxercise, but Yoga has been the one thing that’s kept me coming back for more.

As I attended classes and got more comfortable with the basic poses, I knew I was falling hard for Yoga. Fast-forward to 2017 and Yoga and I have been going steady for years.

I joined the gym with Yoga on my mind. I’ll be able to fully commit in classes, I told myself as I signed the membership forms. Yet, as I walked into the gym for the first time, mat under my arm, I couldn’t help feeling my head turn towards the Weights room.

I’ll just have one peek, I said to myself. No one needs to know.

Back in the yoga studio, I tried to find my groove. But I just wasn’t getting the buzz I normally did. I wanted something more.

So I did it. I signed up to Weights class.

On my first day, I couldn’t have been more nervous. I’ve been with Yoga for so long, what if I’ve forgotten what to do?

Gradually, as I grew to like Weights more and more, I stopped seeing Yoga altogether. My mat sulked in the corner of my room as I practised my squat form in front of the mirror. Things were going great. I didn’t miss Yoga at all.

But then things started getting serious with Weights. They kept demanding more from me: one more rep, a heavier load – it felt like I was never good enough. I remembered how Yoga used to stretch me out, boost me up on the inside, make me feel good. I would leave Yoga on cloud nine. With Weights I’d be scuttling out the door, already dreading the next week.

And it wasn’t just when we were in class, either. After leaving Weights, I’d feel awful for days; every muscle in my body would ache. I missed the light, airy feeling Yoga gave me. That feeling of oneness with my body, mind and soul.

As I stared wretchedly at the set of dumbbells waiting to be lifted, I knew I’d made a terrible mistake.

On Monday, I sheepishly headed back to Yoga, tail between my legs. Yoga didn’t berate me, say ‘I told you so’ or hold a grudge. Yoga just welcomed me back with open arms.

I left class feeling contented, stretched out and super chilled. My body had worked hard, but I’d been in control. I might head back to Weights from time to time, but Yoga will always be my one true love.

Do you supplement your yoga with anything else? Tell us about it in the comments!