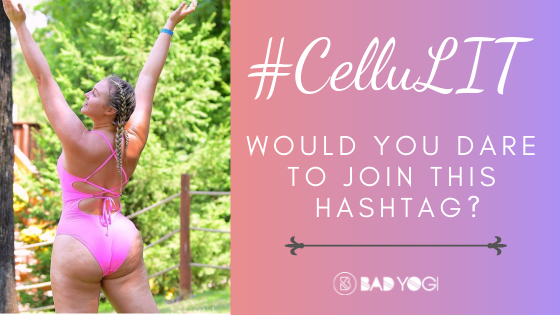 #CelluLIT: Would You Dare to Join This Hashtag?

If you don’t know 28-year-old British model Iskra Lawrence, you really need to jump onto Instagram right now and follow her. Why? Well, she’s only one of the biggest body-positivity activists out there, and has inspired thousands of women to accept themselves exactly as they are. The latest awesome thing she did? She started a viral hashtag called #celluLIT, encouraging women to stop hiding their cellulite and embrace it as a natural part of their bodies instead.

If you know Lawrence, you also know that she never holds back when it comes to challenging the world’s unrealistic images of what beauty is supposed to look like. That’s one of the reasons so many women cite her as one of their biggest role models. Something else that sets Lawrence apart from the rest is that she always appears exactly as she is in photoshoots – no retouching, no photoshop. She wants women to make happiness their main goal, instead of a number on the scale.

Lawrence uses her platform on social media to be the change she wants to see in the world – and a lot of women have taken note. Recently, she ran a no-makeup challenge on Instagram, encouraging her followers to let their natural beauty shine through. Health reports that another campaign that garnered a lot of attention is her #celluLIT campaign. She started it off by posting an image of herself in a swimsuit, proudly flaunting the cellulite on her butt and thighs. Then she challenged other women to do the same.

In the Instagram post that started it all, Lawrence admitted that she only recently came to a place where she felt like she was comfortable with her body, saying, “Life’s so much easier when you live it for YOU. Not for someone else’s beauty ideal, someone else’s validation, or a socially constructed perfection. Being you and doing you is always enough.”

Can we have a “yasss queen”? More than 18,000 women have since shared similar posts with the #celluLIT hashtag. Even powerlifter Meg Gallagher shared a picture of her flaunting her cellulite.

Many followed after, like journalist and blogger Liz Black, who admitted that she had always been super self-conscious when it came to her cellulite, saying that she spent years trying to hide it and that finally revealing it to the rest of the world feels very liberating.

“I spent so many years hiding my thighs because I felt so much shame about my cellulite. I spent summers sweltering in jeans, insisting I was comfortable, simply because I didn’t dare slip on shorts and show the world the truth. I’ve slathered creams, tried exercises, and even spent a very uncomfortable hour wrapped in serum and saran wrap in hopes of ‘improving the texture,'”Black wrote.

Well, can we all just make a pact that none of us will ever again die of heat in the summer just because we’re afraid of what people will think of our cellulite? Because honestly, it’s ridiculous. Black added that she knows nothing will take away the bumps on her skin, so she can just as well embrace them as her own: “Nothing will smooth my stems, and that’s okay. No mark, scar, lump, or bump will ever get me to cover up again. So here they are, in their cell-u-lit glory, my pale thunder thighs are stepping out for the season.”

Body Positivity for the win

We’re so glad to see this kind of body positivity on social media, and hopefully, this campaign will inspire thousands of other women to stop feeling self-conscious about their bodies. There’s something our very own top Bad Yogi, Erin Motz, said a few years ago that was a game-changer for me. It went something like this: Cellulite is like ears or a nose, if you got a body, you have it. Once you start to see it from that perspective, everything changes.

Your cellulite is unique and special

So embrace your cellulite. It’s a normal part of your body. It’s not ugly – it’s unique. Have you ever noticed how no one’s cellulite looks exactly the same? Well, if we can appreciate the uniqueness of another person’s eyes or hair color, we sure as hell can appreciate how unique everyone’s cellulite is. If you’ve got it, flaunt it. We’ll be cheering you on all the way.

Would you join in on this hashtag? Let us know if you do so we can spread the body positivity vibes far and wide!