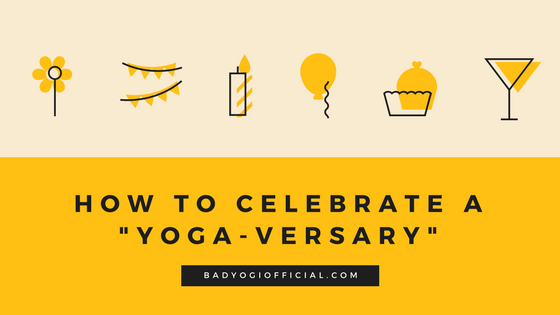 How to Celebrate a “Yoga-versary”

People love to celebrate anniversaries … not just of their weddings, but of other significant events in their lives. I’m no different; this past April 21st marked the anniversary date of the first time I did yoga. So I’m writing this post to commemorate my first – wait for it – yoga-versary.
Last year, I was invited to a cool co-working event for “digital professionals” like myself, featuring guest speakers, networking opportunities, and a yoga class. Sound like the most California thing ever? It gets better – the event was held at an organic farm two miles from the ocean.
Making some new friends and giving yoga a try sounded better than spending another day in my dark, isolated spare bedroom/home office. So, on that lovely April Thursday, I went. Met some nice people, drank some free kombucha, etc., etc. But the half-hour yoga class was, well, life-changing.
Mats were provided, which was nice, because the class was held on an asphalt surface outside … all the better to enjoy the California sunshine (and the aromas unique to an organic farm). Our instructor was a nice young woman, appropriately dressed in the latest Lulu yoga-wear; she led us through a vinyasa level 1 flow. After a few repetitions of movements I now know to be called “Sun A” and “Sun B,” I was nearly exhausted … but exhilarated as well.
Later that day, I went to a performance by a local singer-songwriter, Emily Drew (www.emilydrewmusic.com). Between sets, I introduced myself, we got to talking, and she mentioned she taught yoga at Mantra (www.discovermantra.com), a studio near my home. Emily also noted that her studio was running a “20 days for 20 dollars” promotion, and I should go check it out.
I decided that “the Universe” was guiding me toward bringing yoga into my life (and also that I was starting to use terms like “the Universe”), so two days later, I went to Mantra, took an hour-long level 1 class, and have been practicing yoga ever since. I figured I had nothing to lose by trying … but it turned out I had plenty to lose: inflexibility, lethargy, and even a few pounds of weight.
Now, I spend several happy hours a week at what I’ve come to consider “my” yoga studio. (I’m even considering getting into their teacher-training program!) So, although my most important anniversary will always be that of my wedding (isn’t that nice?), my yoga-versary is the runner-up!
Over to you, yogis! How do you celebrate your yoga milestones?