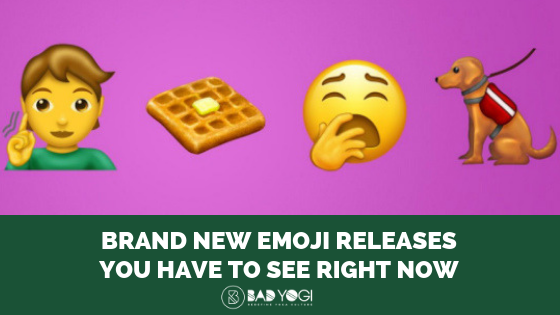 Brand New Emoji Releases You Have to See Right Now

Social media and text lovers will be thrilled to hear that the final list of emojis for 2019 has been approved by the Unicode Consortium. Get ready to feast your eyes (and fingers) on 230 new emojis that will be coming to all major platforms this year. There are definitely a whole lot to look forward to, including what seems to be a period emoji – yes, no kidding. Let’s have a peek at some of the new emojis we’ll be adding to our favorite’s list soon.

Diversity is being promoted

Emojipedia reported that the new update really focused on expanding the scope of people that are represented by the emojis. You’ll find that the “holding hands” emoji will feature people of different color holding hands, which is an amazing improvement, but diversity is not the only thing the new update made room for. 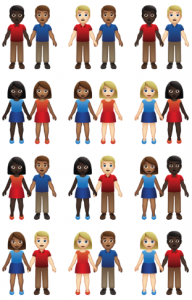 Emojis representing the disabled are finally a thing

Last year Apple suggested that new emojis should include people with various disabilities. Their suggestion was noted and the new update will feature different emojis that are representing people with disabilities – such as an ear with a hearing aid, a guide dog, prosthetic legs and arms, men and women walking with canes and sitting in wheelchairs, as well as emojis of men and women who are deaf. How cool is that? 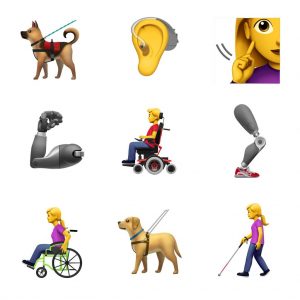 A heart that’s neither hot nor cold

Another nifty addition is a white heart. Through the years, hearts of many different colors have been added, but the white one has always been missing. It has been heavily requested and now it has finally been added to the list.

The heavily requested “White Heart” emoji has finally been added to the list. Image: Emojipedia

There now is a “period” emoji

Something else that popped up that was quite interesting is the “blood” or “period” emoji. It seems that its meaning will most probably be interpreted within the context it is used, but it’s still pretty cool. The emoji simply features a single red blood drop. Yahoo Lifestyle reported that Unicode’s site specifically listed “menstruation” as one of the keywords that will be associated with the emoji. This will be very handy to women who just want to let someone know it’s that time of the month, without having to use the “I’m on my period, leave me alone” phrase, sparing everyone a lot of typing and explaining.

This emoji is probably one of the new ones that got the most attention, with Plan International in the UK – who strives to promote equality for girls among other things – expressing their joy about it on Twitter. They launched a campaign for this type of emoji in 2017 in an effort to lessen the stigma and shame that still surrounds menstruation among girls and women. When the emoji they originally suggested didn’t get approved, they partnered up with NHS Blood and Transplant and submitted the blood-drop emoji, which has now been added to the new update.

We are thrilled to announce that we are actually getting a #PeriodEmoji!

There’s even a new update for men

Men haven’t been left out of the new update either, with a brand new “pinching-hand” emoji being released. The emoji is listed with only one keyword, which is “small amount”. The internet is buzzing with this particular piece of news with most people speculating that it will probably be used most of the time to describe the below average size of a certain *cough* male appendage *cough*.

The “Pinching Hand” emoji has also been included in the new release. Image: Emojipedia

A wide range of everyday emojis will also be released

Along with the somewhat controversial additions, there will be plenty of other new inclusions – like the yawning emoji, which we’ll all be overusing for those early mornings. There are now also emojis of a Hindu temple, a sari, a sloth (Bad Yogis will definitely be using that one), and a personal favorite – ballet shoes. The only thing missing is more red-headed emojis. Hey, I know we only make out like two percent of the population, but we’re feeling so left out. Maybe Apple can vouch for us too?

All these new emojis will be available by the second half of the year, with Yahoo Style estimating their arrival to be in either September or October. In the meantime, let’s be hopeful that they’ll be adding more ginger emojis next year.

You can check out more of the emojis in the video below.