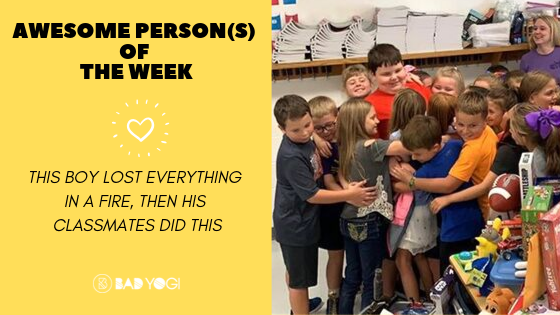 Awesome Person of the Week: This Boy Lost Everything in a Fire, Then His Classmates Did This

A boy who lost everything after his house burned down was in for a big surprise after his classmates decided to do something to help him out after the tragedy.

Third-grader Daniel Hunt and his family faced one of the worst tragedies there is – they lost their house and everything they owned in a fire. According to Kelly Jones, the counselor at Philadelphia Elementary School, he has always been a very positive and happy kid and remained so even after the fire. But even though Hunt was keeping his head up through this difficult time, his classmates wanted to help him out. So all of them, together with Hunt’s teachers, decided to do something nice for him.

Today reports that Hunt’s teachers came up with a brilliant idea to cheer him up in a way that would involve his classmates since they all wanted to help. They decided to start a toy drive. Each student would add something to the cause and within a week, they would present Hunt with the surprise.

According to Jones, the students could barely contain their excitement during the week of the toy drive. They loved sneaking in toys without Hunt noticing. “The kids could not wait to do this for Daniel. It was amazing to witness the excitement these third-grade kids had while sneaking in toys, Jones said. She added that all the students went out of their way to show Hunt that they were there for him. They showered him with love, holding the door for him, pulling out his chair, and even getting his pencil ready in the morning.

When Friday finally arrived, the students could barely contain their excitement. Hunt was blissfully unaware of the surprise that was about to come his way. When he entered the classroom, all his peers shouted “Surprise!”, leaving him speechless. 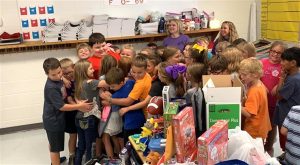 Daniel immediately hugged all his classmates after they surprised him with the toy drive.
Image: Kelly Jones / Philadelphia Elementary School

According to Jones, Hunt’s reaction was heartwarming. Instead of immediately going through all the toys, he thanked all his classmates first. “He said ‘I love it! Everyone come here,’ with his arms open wide. The kids immediately swarmed in for a large group hug. I love that because it shows Daniel’s big heart. When he saw what his class did for him, he didn’t immediately start going through the toys — he wanted to give his classmates a hug for what they did for him.”

Being there for someone going through a crisis

The adults in the room had trouble trying not to cry, while even some of Hunt’s classmates shed some tears. Jones said that it was a beautiful experience. “I feel extremely blessed to have witnessed the pure love and giving from the hearts of the third-grade students at my school.”

It’s a beautiful thing when people come together to help someone who is down or going through a rough time. These kids make us all a bit more positive about the future, knowing that there are still people out there who are willing to help those who are going through a crisis.