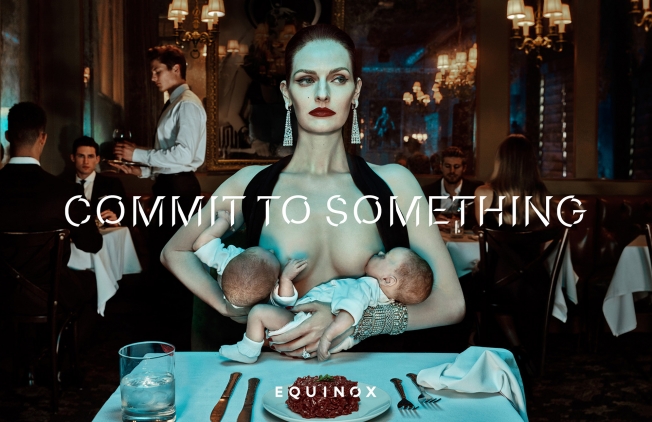 … confused. Like, what is going on these pictures?! I mean, we get that generally, it’s saying to commit to something, but we still had a pretty good time going back and forth about our own, and I’m sure, very accurate, interpretations 😉

1) Okay, so to all my breastfeeding women out there: HIGH FIVE! It’s ridiculous that it’s even “controversial” to feed your child when you need to. If this was an ad for making breastfeeding in public more accepted, I’d be all about it. But we’re mainly just like, what? How does this relate to a gym or fitness? Kind of a cheap shot to get a response! 2) “In this one they’re building a hut … isn’t it obvious? They just can’t decide whether they want to make it a duplex or a single family.” – The Frenchman
“Yeah, don’t get it. This looks like a scene from The Following sans red capes.” – Chelsea
“I mean, I’ve never been daring enough to go platinum blond, because I KNOW it’s a commitment. Bravo to them for undertaking the bleaching process.” – Alyssa 3) “Those naked hairless cats are freaking me out. And whose kitchen is that filthy?!” – Erin
“Yeah like if you’re going to have a few cats, commit to being the cat lady and have a dozen.” – Chelsea 4) “Commit to a California king-sized bed if you’re going to have that many people sleeping in it.” – Chelsea
“The guy in the middle is totally checked out, and the girl on his left is trying to make it work. Poor girl. Look where his hand is resting, sweetie. Your attention is much better directed elsewhere, because if any commitment is happening in this shot, it’s not between these two.” – Alyssa
“The germaphobe in me is mainly worried about the shoes on the bed… that’s the first place my eyes went! SHOES ON THE BED, PEOPLE! DO YOU KNOW WHERE THEY’VE BEEN?!” – Erin 5) “I’ve seen this guy on Tinder before and he’s not committing to anyone.” – Chelsea
“Commit to the ’80s aesthetic, right? That’s what’s going on with the wood panelling and tube TV? So retro.” – Alyssa 6) “Nothing wrong here. I do this all the time… I’m doing this right now.” – The Frenchman
“He can’t even commit to his cocktail. Or pants. And I dunno, if you were really committed to your money, would you let it be strewn about so haphazardly? I think not.” – Alyssa Over to you: what do you think?! Can you interpret any of these? We’re kind of a lost cause, as you can tell 😉