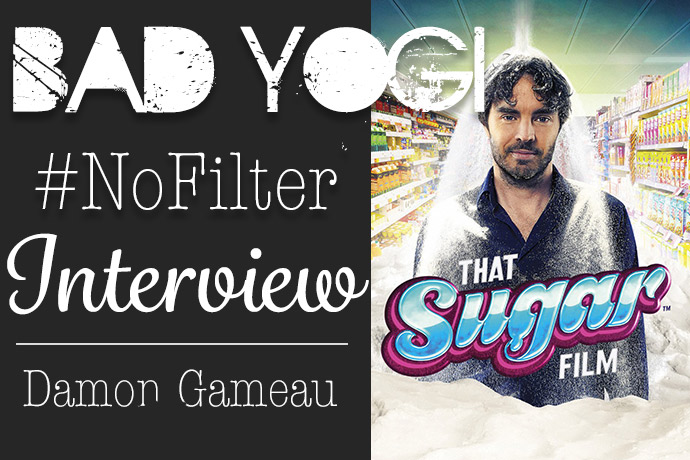 I absolutely loved That Sugar Film, and as soon as the credits rolled on my viewing, I reached out to grab a few minutes to talk with its creator, Damon Gameau. I knew you guys would love what he’s doing. Damon is making waves in the health and wellness industry and is definitely someone to watch out for, especially if you’re a self-proclaimed Bad Yogi. He takes a slightly friendlier approach to cleaning up our diets without using fear as the primary motivator to his argument for quitting sugar.

The gist of the documentary: Damon goes on a diet (or anti-diet?) to document the effects of a high sugar diet on a healthy body. He eats no candy or soda and ONLY consumes foods that are marketed and generally perceived as “healthy”. I’m sure you can guess where this story ends, but the journey is absolutely fascinating and full of great information. For example: the average Australian consumes about 40 teaspoons of added sugars daily, and when he visited the States for his experiment, he found it difficult not to exceed that (!!!). For reference, the American Heart Association recommends adults get no more than 9 teaspoons per day. Can you imagine?!

I’ve seen other documentaries like this (think Food Inc and Forks Over Knives, etc), and while they’re all great, they left me feeling queasy, discouraged, and incredibly sad. I felt like the diet standards to live up to were SO out of my league that I wasn’t even going to bother. That Sugar film was, by my estimate, 100 times more accessible if you’re looking to make small changes that you can actually stick with. Six weeks after, I’m still applying all the small adjustments to my habits that Damon suggests. Really looking forward to introducing you, so let’s do this!

1. Describe who you are and what you do in 3 sentences or less.

I am Damon Gameau and I made a film and wrote 2 books about sugar. It involved eating 40 teaspoons of sugar a day for 60 days found hidden in perceived ‘healthy’ foods. So, no chocolate, ice cream, confectionary or soda was consumed during my experiment.

2. As someone who’s making waves and gaining influence in the health and wellness industry, do you ever feel like you need to put on a front or “fake it” to dodge your harshest critics? In other words, are you ever insecure about what you put out there?

Of course. I am a hyper sensitive person and am aware I have made a film that many people won’t agree with (I am learning though that it is usually because there is financial interest involved). I have learnt so much about myself during this process and feel that you really have to jump off the cliff in this precious one life that we get to get truly rewarded.

3. In the film, you essentially force yourself to become fully addicted to sugar and processed foods as part of your experiment. How difficult was it to re-acquaint yourself with healthy, whole foods after that?

Easy. I had a great reference of what I was like without the sugar and desparately wanted to return to that person. Healthy, stable moods and vitality. Its a much better way to live life than riding the sugar coaster.

4. How long did that habit take to break before you stopped craving those bad-for-you-sugars?

About a week. A recent study showed that it took 86% of people around 6 days to remove cravings and for their palates to adjust. It does adjust and you start to notice the subtle natural flavours of real foods again.

5. In making the film, think back to when you were feeling your worst… did you ever doubt your decision to fully commit to this, given the toll it was taking on your body?

Many times. My wife was 8 months pregnant so I had a real fear that the baby would be born with me being overseas a fat, grumpy sugar beast.

6. I think a lot of people appreciate your relatively friendly approach to eliminating sugar. It doesn’t feel extreme or drastic, it really just involves paying attention and employing a bit of discipline in reading labels. Did you intend to take this accessible approach or was it kind of a happy accident that it came off this way?

Absolutely, I think there are enough things to fear on this planet. My aim was to empower people with knowledge and then let them make a choice. No-one likes being preached at so we worked very hard to avoid that and to make it a fun and accessible ride for the family. We are thrilled at how well it has been received.

7. That Sugar Film isn’t in theaters in the US quite yet, so if you had to narrow down 1 or 2 takeaways from it to tell people, what would they be?

I think with tobacco people understand how it affects us and so can make a fully informed choice as to whether to smoke to not. We are not there with sugar yet and my hope is that this film will help the education process. The message is not fear based at all, it is about reduction not elimination.

8. What was the biggest takeaway for you personally after all of this?

That labelling around sugar is not nearly clear enough for people and companies need to be more strongly regulated when it comes to health claims on their packets and advertising to children. We also need to find a better way of encouraging people to eat real foods again and to return to local produce.

9. For anyone who might feel demoralized by the amount of seeming restrictions they have on their diets, where would you tell them to start?

Eat real food. Shop the perimeter of the supermarket. Your body is part of the natural world, so if you eat natural foods, it predominantly knows how to deal with them. Once we start refining and processing too much, problems can occur. If that means choosing water instead of coke with your burger to start, then do it, it will make an enormous difference.

Ha, we have study guides, a free app, an aboriginal foundation and two books out now. It has been a wonderful journey. I am passionate to continue and get the message to children but am also looking forward to starting my next film which has nothing to do with food.

Over to you: You guys NEED to watch this film! I have no incentive for you to, of course, but I really loved it and think you all would appreciate the approach, too. It’s not in theaters but I watched it on Amazon for free because I have Prime. It’s definitely made me pay more attention to how I eat and made me even more confident about my choices in general, actually. What do you think about your sugar intake?! Do you think you get more than you should?