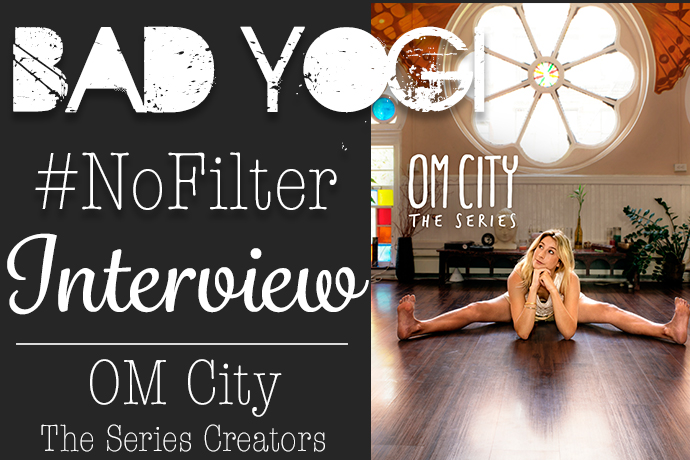 Have you guys seen the Om City Series on Vimeo? The Frenchman actually introduced me to it and said, “You need to see this,” and I expected a puppy video or something. But OMG you guys– it might (might) have been even better than a puppy video! It’s seriously hilarious. It’s a web TV series that dives deep in to the belly of yoga culture, and it’s at once sweet, inspiring, and hysterical. It’s so, so real, and I felt like I was watching something created by kindred spirits so I had to reach out to its creators, Jessie and Tom. They’re married in real life and play colleagues in the series. I’m including one of my favorite episodes below, so take 5 minutes to watch. You might need some tissues for the episode– I was laughing so hard I had TEARS. TEARS, y’all 😉

1. Describe who you are and “what you do” in 3 sentences or less.

We are actors, filmmakers, yoga teachers and husband and wife. We are creators of the online series OM City.

2. What’s the best and worst thing about your work?

The best thing is getting to make things with people we love respect and admire. The worst thing is we wish we could spend more of our time making the things and less of our time raising financing.

3. What was your goal in creating the Om City series? Was there a specific event or thing that made you go, “okay, we DEFINITELY have to make this NOW!”?

We wanted to create something together and because yoga was such a huge part of both of our lives, and it had such an incredible potential for rich story telling we wanted to do it.  The idea started to pour out when Jessie was assisting Elena Brower’s advanced teacher training and we both wanted to bring together our double lives as actors and yoga teachers in NYC. We also felt like everything we saw in the mainstream media about yoga was so broad and over the top and not what our experience of yoga was that there was a real need and a desire for a series that was more real and truthful about the yoga community that we experienced.

4. As teachers and influencers in the yoga community, do you ever have moments where you feel like you should “fake it” or keep up appearances for the sake of outside opinions? This isn’t to insinuate that you actually do this, but do you think there’s pressure to do that?

There is definitely a pressure when you assume the seat of the teacher to have your shit together and be worthy of being called a teacher but as Elena says in the series “Your weaknesses are your places of real power”. When you are honest with yourself as a teacher about what you don’t know and that we are all in process you don’t have to feel like a phony.  You can be honest with your students because you are honest with yourself and you gain a real credibility with them and people in general are more responsive than if you’re preaching from a high horse like you’ve got it all figured out.

5. Are you ever insecure about what you put out there?

Whenever you put yourself out there in an honest and open way it’s very vulnerable. But if you really believe in what you do it’s worth it.

6. How do you snap yourself out of it? Do you have a ritual that brings you back to the reality of your badassery? 😉

Keep focusing on the work, for sure. Meditation and writing/journaling two pages every day definitely helps too.

7. Being a yoga teacher is similar to being an actor in that it can be difficult to make a living. What advice do you have for people who want to stick to their goals and their dream but still have to pay the bills?

Design your life in a way that enables you to pay the bills but leaves time and space for creativity.

8. What’s your personal measure of success?

Doing what you love and creating a life that supports that.

9. In your career and life, what’s been your greatest asset? And, if you care to share, your greatest hindrance? How did you overcome it?

Having a clear vision and knowing what we want is our biggest asset. The hindrance is overthinking and second guessing ourselves. You overcome it though by just trusting the dream and taking the first step and it’s amazing how things fall into place and people show up to help.

10. What would you say to anyone who thinks the series is hurtful to yoga’s image? Have you had to deal with much criticism since launching?

No we haven’t heard that at all. It was important for us that the show have a level of respect and depth because we do honestly love the practices of yoga and believe in them. The yoga community has been amazing and embraced the series. It’s inspiring to see how they have supported and shared the it all over the world. We didn’t have money for publicity and somehow it’s getting out there.  The power of the internet is incredible.  We’ve have gotten messages from all over the country, Canada, France, Spain, Germany. Turkey, Argentina, Denmark, Sweden and Macedonia. We’ve been interviewed and picked up by yoga blogs all over the world. It’s really incredible and validating and makes us realize how there is a such a desire in the yoga community to be represented in a real and subtle way. We feel so gratified and proud of the response from the yoga community.

11. You guys include some hilarious and highly relatable moments in your series that playfully poke fun at some of the cliches in the yoga world. What is the most true part of the series? What is the most exaggerated?

Very little exaggeration. There a couple places we took the truth to a little bit more of a heightened place like in Episode 5 “Think of Others” but we wanted everything to be really grounded in reality. The comedy in the series is subtle and truthful, the style is realistic so we were very aware of keeping it real and not getting into the world of too exaggerated, over the top and broad. It’s easy to make fun of yoga but we also wanted to show the beauty and profundity that have inspired billions of people around the world to practice yoga and to poke fun from a place of love let’s say.

12. In one episode we watched which is embedded above, Grace’s brother goes to a yoga class and ends up snuggled up next to the late comer who gets deeply emotional in child’s pose, and we could NOT stop laughing! How was YOUR first yoga experience?

Tom: I actually had the experience of a militant yoga teacher who made me take my socks off even though I didn’t want to…

Jessie: Mine was definitely more enjoyable. It was an Amsterdam where I was doing an experimental theater program. We had no mats or props it and loved it, I was like WHAT IS THIS THING?! And was hooked.

Thanks so much for your questions, for watching and more news coming soon about OM CITY Season 2…  Stay tuned!

Over to you: What did you think? Did you watch any other episodes besides the one above? I can SO relate to the feeling of the weight of being a full-time yoga teacher. Granted, their/our plights are far from the worst in the world, but it definitely has trying moments and ones that make you wonder what the heck you’re doing. I think Grace’s character is just perfect. How about you all?!

Leave a Reply to Jen Cancel