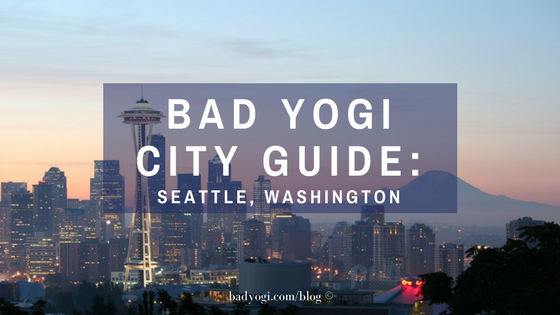 With four locations—one in each corner of the city—you’re never far from Seattle’s most established studio. Founded 21 years ago, 8 Limbs instructors are experienced and knowledgeable (many of them trained by the studio’s own teacher training program). 8 Limbs is a leader in social justice and inclusivity, and regularly hosts special events to that end.

In the rapidly changing Columbia City neighborhood, one thing that hasn’t changed is Lotus Yoga’s commitment to their community. Offering a range of classes for every audience, an esteemed teacher training program, and regular benefit classes for local non-profits, Lotus embodies the values of yoga on and off the mat.

Yogis who appreciate consistent sequences in a warm room might try Breathe Hot Yoga. Fitness-oriented classes—including traditional Bikram—are offered nearly any time of day at one of their three locations.

A rotating list of seasonal specials compliment long-time standards like the Breakfast Quesadilla, Portabello Wellington, and Oaxaca Tacos. This sit-down restaurant near the Washington Park Arboretum is the standard-bearer in thoughtful, locally sourced food that will please herbivores and omnivores, alike.

Consciousness and intention define this vegan treasure, which offers one seating per night and a 5-course, prix fixe menu. From the menu itself to the sourcing of the ingredients to the spoken blessing before the meal, everything about your meal is carefully considered and delivered with love, a yogi’s paradise. Accommodations happily made for dietary restrictions and allergies.

If you’re looking for something lighter or on the go, beat feet to Heartbeet. Nutrition is packed into the menu here, which includes soups, grain bowls, entrees, smoothies, juices, and sumptuous raw, vegan desserts. Don’t be surprised if the first thing you try is the one you keep coming back for; it’s impossible not to fall for everything on offer. It’s “real food that loves you back.”

First-timers should probably see what the fuss is about and spend an afternoon at Pike Place Market. From crafts to food to flying fish, this market has it all. A new expansion opened in 2017, providing great contrast (and a stunning view!) to the Old Seattle you’ll experience in the rest of the historic market. 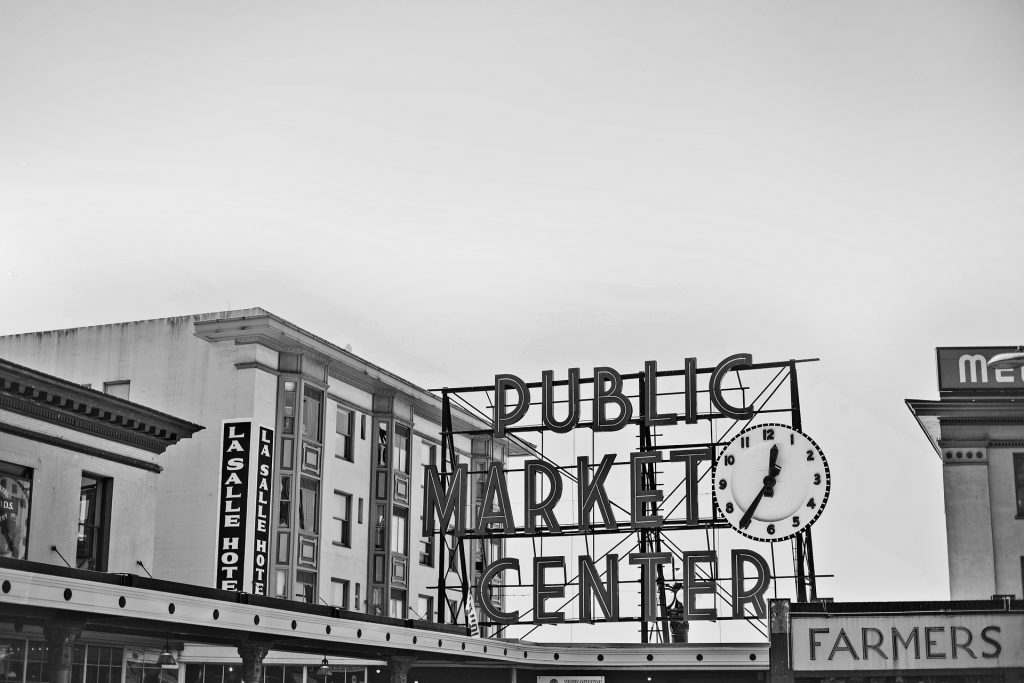 Sometimes the tourist-y things are the most fun.

If you like your markets a little funkier and much less crowded, head to the Fremont Sunday market, which features crafts, artisan foods, vintage clothes and furniture, and a bustling, undercover flea market. Stick around and peruse the rest of the shops on North 35th Street, where you’ll find boutiques for men and women and Destee Nation, which features iconic t-shirts from Seattle landmarks.

Unless it’s legal where you live, pot shops are a novel thrill. Be prepared to show your ID at the door (21+ only), and to be overwhelmed by more options for ingesting THC than you ever knew possible. Staff are generally very knowledgeable; don’t be shy about asking as many questions as you need to get the right brew for you.

Seattle has a lot of great music venues, both indoors and out. Check the calendar at the Showbox and Marymoor Park to see what larger acts are coming up, or take your chance on a smaller venue like Neumo’s, Nectar Lounge, or Chop Suey.

For one reason or another, Seattle often gets new shows before they hit Broadway, making it an exciting city for theater. Two large historic theaters and lots of smaller ones offer the full spectrum, from one-woman monologues to massive stage productions. The Pacific Northwest Ballet, Seattle Opera, and Seattle Symphony round out the bill with a variety of shows each season.

Meeting friends? Try the Garage, which offers bowling, billiards, and two bars. It’s a perfect place to catch up with besties or meet someone new, and they do accept reservations, sparing you a potentially long wait, especially on the weekends.

What better way to preserve your memories of Seattle than with original artwork indelibly inked in your skin? You won’t have to look far to find a studio, but ArtCore is one of the best. Ask for Phil, whose charming smile and friendly bedside manner will put you right at ease. He’ll even change the music if you ask nicely.

Need to escape? Discovery Park offers the most extensive trail network in the city, beautiful views of Puget Sound and the Olympic Mountains, and enough trees to forget all about how many construction cranes currently dot the city’s skyline.

One of the best places for people watching is unquestionably Alki Beach. You’ll see cars cruising, Seattleites working off the winter pale, beach volleyball players setting and spiking, and runners and rollerbladers narrowly avoiding the bike and surrey rentals along the waterfront walkway. Plus dogs!

Agua Verde Restaurant and Paddle Club offers canoe, kayak, and paddleboard rentals by the hour, and it’s prime location means you can paddle among houseboats, seaplanes and the Washington Park Arboretum on the same outing. After you’re good and sun-soaked, retire in the restaurant with a margarita and the best guacamole around. 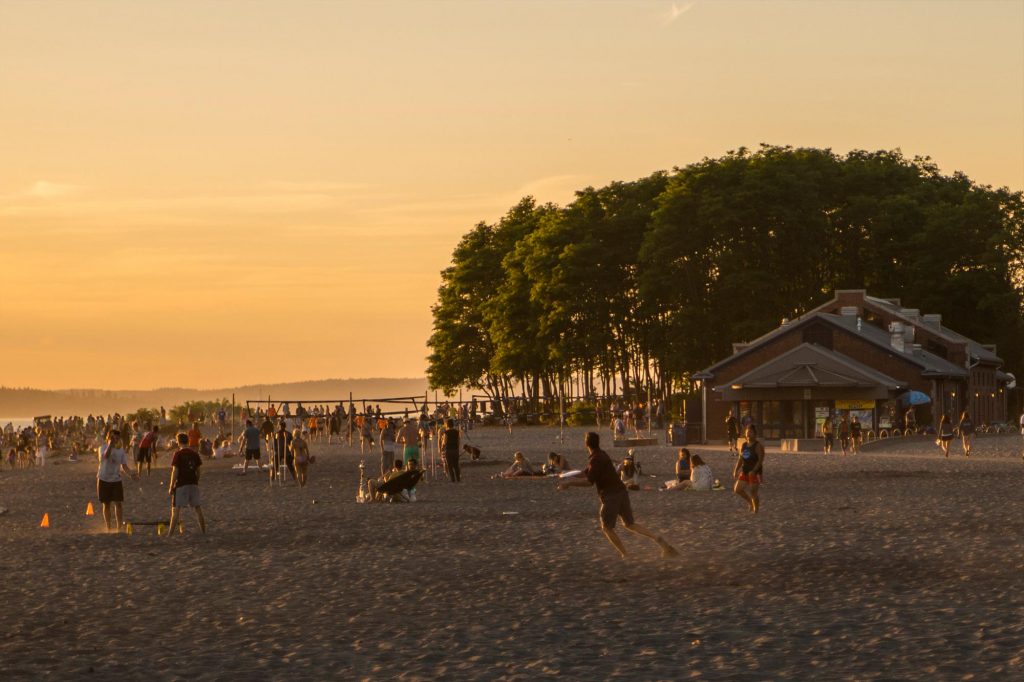 If bonfires and BBQs are your thing, head to Golden Gardens, a beautiful beach on Puget Sound with a great playground for kids. But get there early; this place goes off every weekend between about April and October, and parking is limited. Also worth noting: don’t wear white. This may be one of prettiest beaches in Seattle, but—due to the campfires—it’s also one of the dirtiest.

Often mistaken for a festival celebrating drug use, Hempfest is a political rally that aims to raise awareness about drug policy reform and the vast utility of the cannabis plant. Food, music, vendors, and crafts round out the experience of this free protestival (suggested donation at the door).

Naked people on bikes! There’s a lot of other cool stuff at this annual event, but naked people on bikes is without question the most noteworthy. Hard to say if it’s more fun to spectate or participate, but everyone is welcome to do both at this anything goes celebration of summer.

Labor Day weekend in Seattle means art: music, film, comedy, yoga, cooking, dance, theater—Bumbershoot has it all, at then some. Recently taken over by AEG, the “new” Bumbershoot is younger, better organized, more expensive…and as much fun as ever.

Ready to come visit me? Let me know if you have any questions about Seattle!

Leave a Reply to Visionlhv Cancel