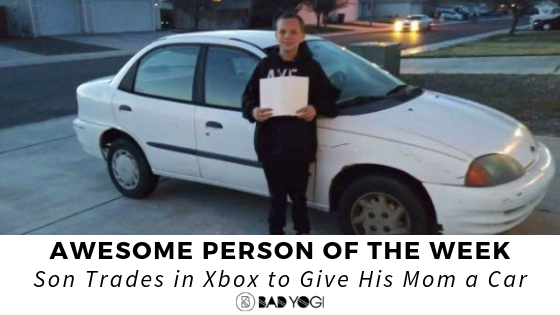 Awesome Person of the Week: Son Trades in Xbox to Give His Mom a Car

These days, it’s hard to convince your kids to wash the dishes, let alone do some much-needed work in the yard. Kids will be kids, but when they see their parents truly suffering, most of them will try to lend a helping hand, which is exactly what 13-year-old William Preston from Nevada did.

Preston showed the world that even though kids will be kids (especially during those adolescent years), they do take note when their parents are suffering. Global News reports that Preston’s family was going through a rough patch, with his mother trying to provide for him and his two other siblings while trying to make ends meet – all without a car.

Preston started doing some yard and housework for neighbors in his community to earn a bit of extra money to help his mom, but one day he was scrolling through Facebook and saw that a woman nearby was selling a 1999 Chevrolet Metro. The car was on sale for a very reasonable price and Preston decided to ask the woman if he could trade in his Xbox for the car and earn the difference. The answer was a no at first, but after the woman thought about it, she gave him a yes.

Trading in an Xbox for a car

After sealing the deal, Preston told his mother that he got her a car. She didn’t believe him at first – a teenager buying his mom a car is not something that happens every day. For one, they don’t earn a salary and few of them would trade their Xbox for anything. Preston realized that his mother wasn’t going to believe him unless he showed the car to her, so the seller drove over to their house and picked them up. She took them to her place where the car was waiting for its new owners. 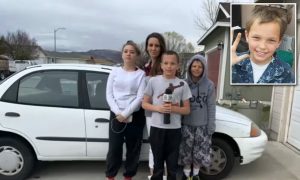 William Preston managed to negotiate a deal to get his mom a car.
Image: KOLO ABC 8

Being selfless brings joy to you and those around you

Preston’s mother couldn’t believe her eyes and burst into tears. They were handed the keys and the paperwork and then it was official – Preston had gotten his mother a car. Even though the car needs a bit of work, his mother is unbelievably proud of him. “The fact that my kid did this, I’m proud, but as a mom, I’m supposed to be able to take care of my kids, I’m supposed to do this, not the other way around. What 13-year-old buys their mom a car?” she said. She added that there will never be enough words to express her gratitude towards her son. Preston, on the other hand, is just very happy that he could make his mom happy and make life a bit easier for her.

In a world that has the mentality of “every man for himself”, it’s great to see that there are kids who would literally do anything to help their parents out. It’s also good to know that there are people out there who will help those kids to help their parents, because we’ve never heard of anyone willing to give up their car in exchange for an Xbox. Kindness always has a ripple effect, so let’s spread it far and wide.