Awesome Person of the Week: Daughter Reassures Mother with Dementia Using Messages on a Whiteboard

The awesome person of this week is an unnamed woman who had a brilliant idea to help her mother who suffers from dementia. Her care and thoughtfulness inspired thousands around the world to follow her example.

A whiteboard with reassuring messages

BBC reported that a GP in Wiltshire in the UK by the name of Dr. Philip Grimmer was visiting a patient with dementia when he saw a whiteboard in their room with several reassuring messages. Talking to the patient’s daughter, she told him that she put the board there to reduce the anxious phone calls her mother often made to their relatives. The board was in her eye-line, so she could always see it. It included reassurances like “You haven’t upset anyone” and “You don’t owe anyone any money”. 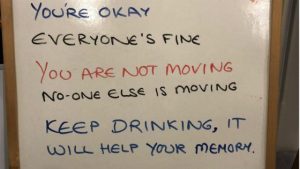 Grimmer said that his first thoughts were to share the wonderful idea on social media. “I’d not seen anything like it before in thousands of house visits. It’s caring, reassuring and sensible – it’s just such a simple idea.”

Words of reassurance left for an elderly lady with dementia by her daughter. A simple white board left in her sight line in her sitting room. Helped to reduce constant anxious phone calls. pic.twitter.com/K2ueZXuZWZ

Grimmer intended his tweet to be seen by his fellow colleagues, but since he posted it, the tweet has been liked more than 40,000 times. People all over the world thought the whiteboard a brilliant idea to reassure those with dementia and address all the questions they usually have.

One user tweeted that she had been working in the NHS for 28 years and gets help from her friends and family to create “memory boards”. She said it brought back the sparkle to the patients’ eyes and has made communication between the staff and patients much easier.

We have these memory boards behind every bed on our ward it help us to interact with our patients there fantastic we’ve seen an amazing response ❤️ pic.twitter.com/JgbM0aHO5K

Grimmer’s post soon gained global attention and got reposted on Reddit by Arman Bhatia from India. It gained more than 112,000 upvotes, making people aware of the anxiety dementia can cause to those affected by it. It led to many other people sharing their stories about living or working with people who have dementia.

People working with patients suffering from dementia spoke up

Hailey, who is a nurse from Canada, commented on the post in Reddit, telling of her experience where one of her patients would be in tears because he thought that his children had to pay for his meals. She added that at times they would have to call his children to reassure him that it wasn’t so. She also spoke out about the fact that there are people who talk down to those who have dementia and that they have to remember that these people are still adults who know full well when you are treating them differently than everyone else.

She emphasized that you need to have patience when interacting with patients who have dementia and understand that you can’t have a conversation with them the same way you would with someone who doesn’t suffer from it. She thought the whiteboard a brilliant idea, because it addresses most of the questions patients in long-term care usually ask.

A small act of kindness inspired thousands around the world

When it comes to dementia, it is important to remember the person behind it all – even though it may be hard. The most important thing is to reassure them and treat them like the adults they are. Like Hailey said, patience is key.

The whiteboard idea is definitely an amazing initiative taken by a daughter who just wanted to make sure that her mother wasn’t anxious all the time and would know that everything is fine. She could not possibly have thought the impact this small act of kindness would have on the rest of the world. In the process, she has probably inspired many others to do the same, in turn putting more patients at ease. Here’s to being kind and thoughtful – it always has a ripple effect.