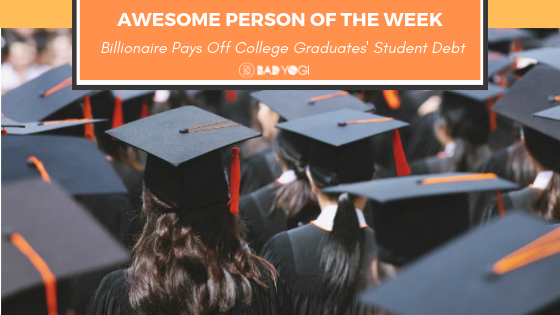 Awesome Person of the Week Popular Trending May 23, 2019

Most of us who went to college had some student debt to pay after we graduated. It can take several years, sometimes even decades, to pay it all off. Luckily, for the students of the Morehouse College class of 2019, a billionaire has offered to pay all their outstanding student debt. Now that’s one hell of a graduation present.

Buzzfeed reports that roughly 400 students graduated at Morehouse College’s graduation ceremony on Sunday, and among them was Robert F. Smith, who received an honorary doctorate. He also happens to be a billionaire and made the surprise announcement as he gave the commencement address to the new graduates.

“On behalf of the eight generations of my family that has been in this country, we’re gonna put a little fuel in your bus. This is my class, 2019. And my family is making a grant to eliminate their student loans.”

Talk about a graduation gift! Morehouse College Spring Class of 2019 Commencement Speaker Robert F. Smith will be establishing a grant to pay off the Class of 2019’s Student Loans so they’ll be graduating debt free! What a time to be a Morehouse Man! #MorehouseGrad2019 pic.twitter.com/uZ9RGP0RML

The graduates did not see it coming

Needless to say, the graduates were filled with disbelief and inexplicable joy. They all leaped to their feet at the announcement, applauding Smith’s announcement. Their parents were just as ecstatic upon hearing the news. One graduate’s mother, Tonga Releford, said that it felt as if it was “Mother’s Day all over again”. Another graduate, Aaron Mitchom, said that he’d already drawn up a spreadsheet to calculate how long it would take him to pay back his student debt. He’d worked out that it would take about 25 years to pay off the $200,000 he owed, but now he could take that off his list of worries.

I can delete that spreadsheet. I don’t have to live off of peanut butter and jelly sandwiches. I was shocked. My heart dropped. We all cried. In the moment it was like a burden had been taken off.”

Smith, who is a co-founder of the investment firm Vista Equity Partners, pledged to pay all the graduates’ debt without knowing how much it would be – he was simply thrilled to be able to make an investment in their future. He also encouraged graduates to learn from positive role models and be part of building a future for the next generation.

“You are responsible for building strong, safe places where our young brothers and sisters can grow with confidence. Watch and learn from positive role models, and believe that they too are entitled to the American dream.”

After the good news spread, many took to social media to express their happiness and gratitude.

This morning’s gesture by Robert F Smith to pay off student loan debt for @morehouse graduating class of 2019 by establishing a grant, should be looked at through the lens of the opportunity cost of debt. What opportunities/paths become possible when not burdened by debt? /1

Just so everyone’s clear: Robert’s gift is estimated at $40 million. It is the largest ever gift to @Morehouse and the single largest gift ever provided to eliminate student debt in the United States. With student debt disproportionately strangling Black people, this is major. https://t.co/qTUCFJKAQy

Every Morehouse Class of 2019 student is getting their student debt load paid off by their commencement speaker.

This could be the start of what’s known in Econ as a ‘natural experiment.’ Follow these students & compare their life choices w their peers over the next 10-15 years. https://t.co/UM1qTJOxHf

When you have more than enough, consider giving to others

Having someone just take away all of your student debt is not something that happens every day, and it’s great that there was someone out there who wanted to use what they had to help others. When you have loads of money to spend, you might as well use some of it to help people, which is exactly what Smith did. It truly is a grand gesture, and one the Morehouse College graduates of 2019 most definitely won’t ever forget.