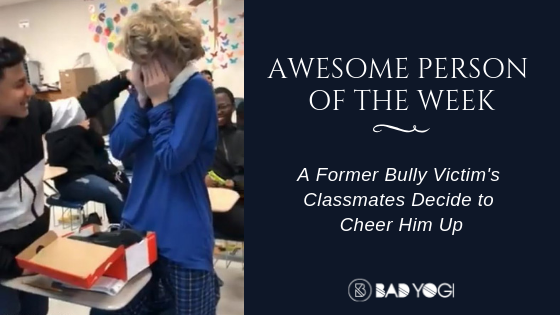 Awesome Person of the Week: A Former Bully Victim’s Classmates Decide to Cheer Him Up

In a world where everyone’s just struggling to survive, we tend to be so focused on our own problems that we fail to notice those around us who are suffering too. Luckily, there are still some people who take the time to notice those who are going through a hard time. In this case, a couple of awesome kids took the time out of their day to cheer up a fellow classmate who they noticed was going through a tough time.

The Daily Mail reports that a couple of ninth-graders in LaVergne High School in La Vergne, Tennessee noticed that their fellow classmate Azreal Robinson was having a bit of a hard time. Despite the fact that he wasn’t the happiest kid around, he was still going out of his way to help his classmates with several things. Having been a victim of bullying at his previous school, it’s amazing to see that it didn’t affect Robinson’s willingness to help others. As with all things in life, you get back what you give and Robinson’s classmates decided that he deserved to be treated for always lending a helping hand to them.

Robinson’s classmates decided to treat him for a change

The entire class chipped in to buy Robinson a surprise gift. They garnered enough money to buy him a pair of Nike sneakers and Dylan Norton, a fellow classmate, gave Robinson some brand new clothes his mom bought for him and his brother. The clothes had never fit either of them and still had the tags on it. Norton decided to give them to Robinson as a gift along with the sneakers. 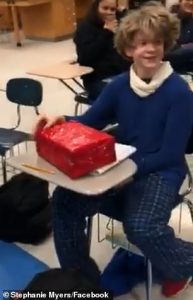 When his classmates presented him with the gift, Robinson had trouble hiding his tears. Upon presenting the gift to Robinson, his classmate Kerolos Girgis told him that they decided to surprise him because of how generous he is and to thank him for everything he does for his fellow classmates. 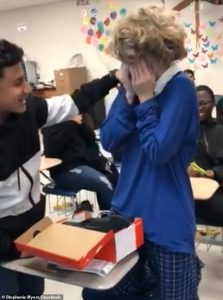 Robinson was moved to tears when his classmates surprised him with a gift.
Image: Stephanie Myers/Facebook

This act of kindness went viral on social media

A video was made of the moment and shared on Facebook. It quickly went viral, being viewed more than a million times already. It was shared by Stephanie V. Meyers, whose younger sister sent her the clip. She said that it’s kids like these that give one hope. She later explained that the gifts weren’t given to Robinson because he was facing any sort of financial hardship – his classmates simply just wanted to show their appreciation. They saw that he’d been having a few rough days and just wanted to cheer him up.

Robinson’s kindness touched the hearts of those around him

The students’ biology teacher, Sonji Newman, told Today that two of Robinson’s classmates spoke to her about doing something nice for him about a week beforehand. Noticing that he was going through a rough time, they just wanted to make him feel better about himself. She added that Robinson stands out among his peers, always helping fellow classmates when they don’t understand something or doing his best to cheer up fellow students who are feeling down. She also said that she had not seen such a pure act of kindness in the 20 years she’s been teaching. 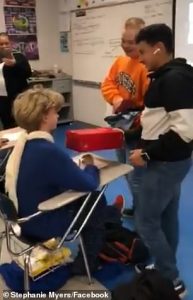 Robinson’s classmates all chipped in to buy him the sneakers.
Image: Stephanie Myers/Facebook

Robinson’s mother also very much appreciated what his classmates did for him. She was worried at first when she picked him up at school and he started to cry, but when she found out why, she was moved to tears too.

We can learn something from these kids

It’s amazing to see that even though kids can sometimes be very brutal to one another, there are still some good kids out there who appreciate their peers and want to make their lives a bit easier in any way they can. We as adults can certainly take a page from their book. Starting right now, make it a priority to check in on other people. Find out how they’re really doing and if life is giving them a hard time, cheer them up. That doesn’t mean you have to buy them something expensive – you can simply be someone they can talk to or a shoulder to cry on. Sometimes that’s all people really want and need.