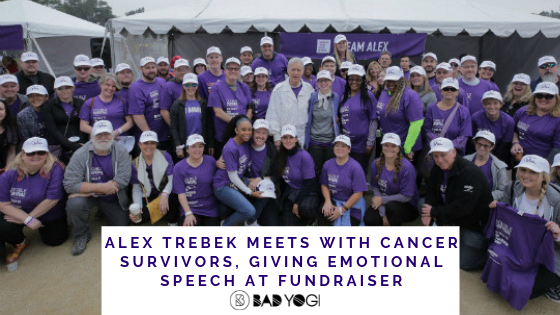 At the beginning of March this year, “Jeopardy!” host, Alex Trebek, announced that he had been diagnosed with stage 4 pancreatic cancer. People were inspired by his positivity and his determination to beat the disease – and two months later he’s still going strong, doing exactly what he said he’d do. He’s fighting for himself and for others who have also been diagnosed with pancreatic cancer.

Trebek, 78, is finding the inspiration and motivation to fight his cancer by meeting with other survivors. Today reports that this past weekend, Trebek attended the Pancreatic Cancer Action Network’s PurpleStride walk in Los Angeles – and he wasn’t there alone. Nearly 200 staff members from “Jeopardy!” and “Wheel of Fortune” participated in the walk as “Team Alex” to show their support.

I’m thrilled that Alex Trebek was able to join us this morning at @PanCANLA’s #PurpleStride. The strength and positivity he demonstrates in the face of #pancreaticcancer is inspiring to us all. We continue to #WageHope in honor of survivors like you, Alex. pic.twitter.com/qBcSswKv7P

People are showing their support

The executive producer of “Jeopardy!”, Harry Friedman, said that “Team Alex” hoped to raise $35,000 in honor of the 35 seasons of “Jeopardy!”, but everyone came with open hearts and hands because the team ended up raising more than $60, 000. The money raised will go towards pancreatic cancer research. “Team Alex” is also accepting donations from the public. Friedman added that the team at “Jeopardy” is adopting Trebek’s positive approach.

“When Alex made his announcement about his diagnosis, his immediate reaction was: ‘I’m going to beat it, I’m going to be a survivor and we will get it done.’ That has been his mantra and our motto and we wear it proudly every day.”

Trebek gave an emotional speech at the fundraiser and invited all of the survivors attending the event to join him on stage. It was clear that his positivity and fighting spirit is not going anywhere. In his speech, Trebek made it clear that he is not focusing on his cancer, he’s focused on surviving and celebrating every day he gets to say “I survived”.

“As you all know, survivorship is measured starting by the date you are diagnosed with cancer. And on that scale, my gosh, I’m a 62-day survivor. I promise you this, if I become a 22-year survivor, you will all be welcome at my 100th birthday.”

Trebek will continue hosting “Jeopardy!” while undergoing treatment. Last month, he reassured fans that he is feeling well enough to continue with the show. His determination to keep doing what he loves and to set an example for others who have been diagnosed with cancer is admirable. He’s proof that a cancer diagnosis doesn’t have to be the end of your life. You can fight it – one day at a time.