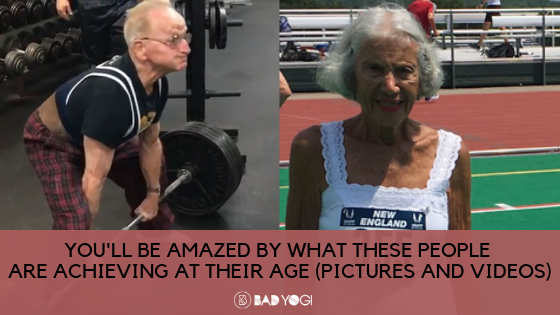 Sometimes, we need some fitness inspiration. We all hit that slump where we don’t feel like working out at all and just want to return to being a couch potato for a while. We know that the trick to keep going is to stop making excuses, and if you’ve been struggling to find the motivation to workout lately, we’ve got some serious fitness inspo right here.

Meet Diane Hoffman. She’s 91 years old and a former tennis player. Today reports that she just broke two US running records for her age group. Oh, and did we mention that she broke a world record too?

The famous phrase “age is just a number” seems to prove true time and time again. Hoffman kicked dust in the eyes of her competitors at the USA Track & Field’s New England Open & Masters Championship in Worcester, Massachusetts, setting two new US records for women between the age of 90-94 in both the 100-meter and 200-meter sprints. When the 400-meter sprint came along, Hoffman broke the world record, running 2:44:25 in the single-lap distance. This broke Emilia Garcia de Fontán of Colombia’s record of 2:46.56.

Here she is crushing the 200 meter dash at a recent competition. #WBZ pic.twitter.com/8hSW104Tva

After her stellar performance on the track, many thought that Hoffman had been running track all her life. It turns out that she hasn’t. She actually randomly started her career when her son saw her running outside and, very impressed by her abilities, convinced her to start competing in local track meets.

Guys, this 91-year-old woman from Massachusetts, Diane Hoffman, gets up every morning and jumps on the trampoline and now owns the WORLD record in her age group for the 400 meter dash and the U.S. record for the 200 and 100 meter dashes.

When she was asked about her wins and how she managed it, Hoffman replied with a simple “I don’t know!” She added that it was all her son’s idea, saying, “My son wanted to me to run…I don’t run, I am [a] tennis player! I guess tennis helped. I always played at the net, going like this, and this…That way no balls could get past me!”

Hoffman’s not the only one who’s proving that your age doesn’t define what you can and cannot do. Recently, a video of 89-year-old Joe Stockinger deadlifting 405 pounds went viral.

Stockinger, who is a member of Gym Nation in Toccoa, Georgia, surprised everyone with his abilities. When you think about it, we actually shouldn’t be surprised – our bodies are amazing, and when we train them, they’re capable of anything.

Jon Mills, who is the manager of Gym Nation in Toccoa, says that it’s one of the most amazing things he’s ever seen.

“I think that it’s one of the most amazing things that I have ever seen. I always tell my clients that age is just a number and that you are capable of anything. Joe Stockinger proves that every day.”

Don’t let anything hold you back

Already feeling more inspired? Great! So go ahead and get that workout in today, whether that means unrolling your mat and doing a gentle yoga flow or doing some strength training. Remember, a little is always better than nothing at all.