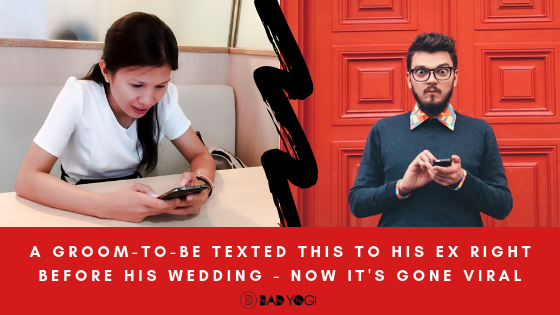 It’s unusual for a groom-to-be to think of his ex the night before his wedding. Some might even see it as a sign that the relationship’s probably not going to last. The viral text message that a man sent to his ex-girlfriend the night before he was to be wed was anything but shady though. In fact, it might be one of the sweetest things you’ve ever seen.

According to Yahoo Lifestyle, Alexsa Sanchez Aguilar took to Twitter on Saturday to share a sweet, loving message she received from her ex-boyfriend the day before his wedding. Aguilar kept his name anonymous, but felt that the text message was something special that was worth sharing. The tweet had people buzzing and soon went viral, but not for the reasons you think. The thing is, Aguilar’s ex-boyfriend sent the text with permission from his fiancé. The reason he wanted to send it was to thank Aguilar for teaching him how to love. Damn, that’s so freaking sweet.

The text started off with him saying, “I’m getting married tomorrow. I wanted to send you this message. Thank you for being my first love.” He went on to thank her for keeping him out of trouble and also helping him through the dark times in his life, adding that he knew they were only kids when they dated, but that she taught him what love is. “My point in all of this is, you are the reason why I know how to love someone. You taught me love, you taught me how to deal with my anger, how to deal with my depression and how to live life to the fullest and I’m grateful for you. I wish you love and happiness,” he continued.

People on social media freaked out

Well, if that’s not the sweetest thing you’ve ever seen, we don’t know what is. Everyone on social media had similar thoughts, with some saying that he was showing true maturity while others said that they would be so honored to know that they helped to mold a man to be the perfect husband for someone.

This has to be the most beautiful thing Ive read. Shout out to both of y'all for being such damn good people.

Imagine having an ex this mature 🤒

Everyone comes into your life for a reason and each relationship you’re in, good/bad, should help teach and mold you to be a “perfect” partner for your future mate. I think this was sweet and I’m sure well deserved. Cheers to being adults and expressing emotions healthily. 💕

There were also some people who thought that receiving a text like that from your ex before his wedding is just super weird.

His fiancée after he sent this text pic.twitter.com/1FsuneaKwl

Idk man if I was the new girl I’d be a little weirded out that you wanted to send a paragraph to ur ex girlfriend & express your feelings.. in my opinion, that’s weird.

Of course, people were very curious as to how Aguila replied to the text, and she later shared her reply on Twitter as well. In the reply, she told her ex that she’s proud of him and that she wishes him and his new family nothing but blessings.

for everyone asking me what i replied to, this is what i replied. i was literally speechless an didn’t know what to say but that’s what i said . pic.twitter.com/Zwkh0iAr2i

Relationships can teach us many things

This is a beautiful example of two people who had to know and love each other for a while to each learn something from the other. The wife-to-be and Aguila’s ex also invited her to the wedding right after all the texting. According to Aguila she and her ex’s wife is quite close. Aguila told people who thought the text was weird that it had simply been a gesture of respect between her and him. They both learned from each other what they needed to, and now life was going on the way it should.

No relationship is ever useless or in vain – even when it’s a mess and doesn’t work out. You always learn something from it and it shapes you into the person you need to become.