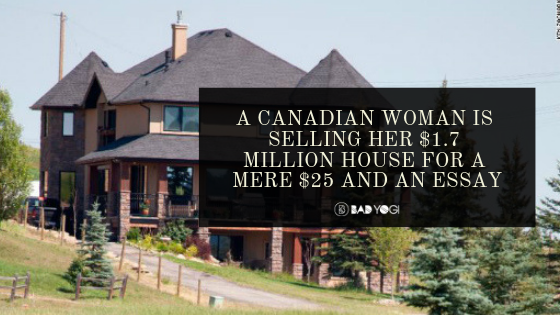 A Canadian Woman Is Selling Her $1.7 Million House For a Mere $25 and an Essay

If you could spend $25 on anything, what would it be? New yoga leggings? That t-shirt from your favorite band you’ve always wanted? Or perhaps you could just buy a house with it.

You might be frowning right now, but relax that forehead. If you happen to have $25 lying around, you might want to consider using it for something else. Last week, CNN reported that Alla Wagner from Alberta, Canada is offering to sell her $1.7 million home for a mere $25 and an essay.

Why would anyone do this?

Wagner is not crazy, there is indeed a method to the madness. Last year, after falling from a new chair she bought for her desk, she hurt her back very badly, which meant that she could no longer climb up and down the stairs of the house. Not wanting to compromise the Georgian-style mansion’s character with renovations to help her with her newfound disability, she decided to sell but did not get the level of interest she had been hoping for. She took the house off the market shortly after and started a contest called “Write a Letter, Win a House”. 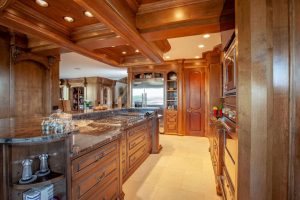 The Georgian-styled house has a beautifully designed kitchen (Photo Credit: Facebook/Write a Letter, Win a House)

How does the contest work?

To enter for the contest, participants simply have to pay a $25 entry fee (just under $19 in the US) and write a one-page entry of 350 words, saying why they are the perfect candidate for Wagner’s home. The written piece can be in any form – a good old-fashioned essay, a poem, or any other form of prose.

A minimum of 68 000 entries will cover the $1.7 million ($1.27 million in US money) that Wagner wanted to sell the house for in the first place. Should the entries obtained by April 5 be just below the minimum required, the competition will be extended.

Wagner will read every entry she receives (so far she’s received over 5000) and once the competition closes, she will choose 500 entries to send to her real estate agents and panel of neighbors. The panel will select three final candidates from the entries to be interviewed. After that, the final winner will be decided.

How will the winner be chosen?

When it comes to the winner of the contest, Wagner says that she is not going to be picky. She simply wants it to be someone whose entry letter had touched her heart,  who really wants to live in the house, and can picture their life there.

The winner will be the owner of the custom-built residence with its three bedrooms, three full baths and two half baths, as well as a wine cellar. For most, the best part of the house might be its panoramic views of the pond and mountains that surround it. It’s got all the things a dream home is made of. 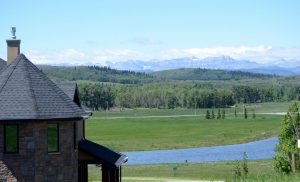 Alla Wagner’s mansion looks out on the surrounding mountains and pond (Photo credit: Facebook/Write a Letter, Win a House)

What if the contest fails to generate enough money?

Should the competition fail to generate the amount Wagner needs, contestants will be refunded. The same applies if the house happens to be sold in the meantime. Wagner made it clear that if she received an offer for the house, she would ask that the offer be delayed until April 5. Should the potential buyer reject her condition and the offer compare well to the asking price, Wagner said that she would have no other choice but to accept it and cancel the contest due to her health issues.

I want this house!

Interested? Sharpen up your writing skills and tell Wagner why you deserve to live in her beautiful home. It might be the best $25 you spend in your entire life. You can check out the competition’s Facebook page for all the details and should you win, do remember where you heard about it and invite us to break in the wine cellar with you. 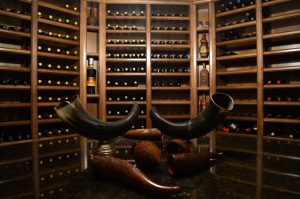 The cellar is any wine lover’s dream (Photo Credit: Facebook/Write a Letter, Win a House)