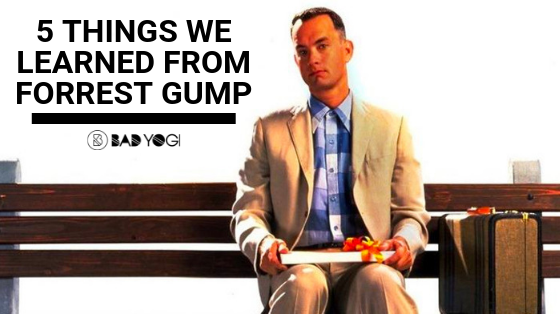 5 Things We Learned From Forrest Gump

Forrest Gump had a below average IQ of 75, yet he he still managed to teach Elvis how to dance, receive a football scholarship from the University of Alabama, be named to the All-American team, meet John F. Kennedy and Lyndon B. Johnson, receive the medal of honor for his heroism in Vietnam, play in ping pong diplomacy against Chinese teams, have an interview on the Dick Cavett show with John Lennon, meet President Nixon and expose the Watergate Scandal, create the extremely successful Bubba Gump Shrimp Company, invest in Apple computers thereby becoming a millionaire, run across the U.S. just because he felt like it, and in the end became an awesome father.

People may have called him stupid, but the man was a legend.

However, it wasn’t these accomplishments themselves that made Forrest such an inspiring person, it was the way he lived his life and how he treated other people. On the surface it’s a funny and heart warming film about a man people consider to be “stupid” who somehow gets himself involved in a lot of random things. But, deep down, it’s full of life lessons we could all stand to learn.

1. Be your authentic self

As a child, Forrest had a disability that meant he needed to wear braces on his legs. Bullies tormented him and chased him which lead to his childhood sweetheart Jenny yelling one of the most famous lines in the movie, “Run, Forrest. Run!”

But, none of this ever seemed to bother him. Much of this was down to the many wise things his mother said to him like, “you have to do the best with what God gave you.”

Forrest embraced who he was even when rude comments and harsh opinions were catapulted at him. His favorite line, when someone called him stupid was, “stupid is as stupid does.” So, in Forrest speak, he was shutting down all the haters who took pleasure in trying to make him feel inferior.

Throughout the movie, Forrest is asked to take part in things from the big, like joining the army, to the small, like playing ping pong. He says yes to both, thereby changing his life in ways he never dreamed possible.

Many of us live our lives in fear, scared of going for things we later regret saying no to. We fear the opinions of others, shame, failure, embarrassment, and a whole host of other things.

Say yes! If your friends invite you to go skiing but you’ve never done it, you’ll learn! If you try a new food, the worst that will happen is you’ll realize you don’t like it.

You never know, maybe you’ll end up as a ping pong celebrity with your face on a paddle like Forrest. As Forrest said, “always be able to look back and say at least I didn’t lead no hum drum life.”

3. Don’t allow other people to put you down

There were a lot of things about Forrest that made him an easy target for cruel people. He had braces on his legs, a low IQ, and he talked slow.

But, regardless of the bullies in school or even the love of his life Jenny telling him he didn’t know what love is, Forrest never allowed himself to be put down. “What’s normal anyways?” is what he said.

Other people don’t get to dictate who you are or what you should be doing. Opinions are simply that, opinions.

4. Go for you dreams, despite the naysayers

Everyone laughed at Forrest when he decided to buy a shrimp boat and despite a string of failures he persisted. Well, as luck would have it (at least for him), a hurricane took out all the boats from the shrimping industry in that part of Louisiana, except for Forrest’s boat. From them on, they were getting all the shrimp they could possibly want. Eventually, Bubba Gump shrimp had 12 boats and a warehouse.

People may have thought Forrest was stupid, and that his idea would never work, but he did it anyway and it became a massive success. If there is something you’re dying to do, like starting a new business, going to school, or creating a new website, go for it! Even Bill Gates, Mark Zuckerberg, and Warren Buffett didn’t escape without having to listen to doubters tell them they would never succeed.

A majority of the movie sees Forrest telling his stories to strangers at the bus stop while sitting on that famous bench. While some of them appear disinterested and not willing to talk, others are transfixed by his stories and one older woman even misses her bus just to keep talking to him.

Sitting at a bus stop these days, 98% of the people waiting are focused on their phone, and have no desire to talk to anyone around them. Look up from your screen, start a conversation with someone, you may be surprised at the life stories they have to tell you.

Forrest Gump may have had an IQ of 75, but somehow throughout this movie he proves himself to be smarter than most of us. So, I’ll end this with a quote from him, “I don’t know if we each have a destiny, or if we’re all just floatin’ around accidental-like on a breeze. But I, I think maybe it’s both.”