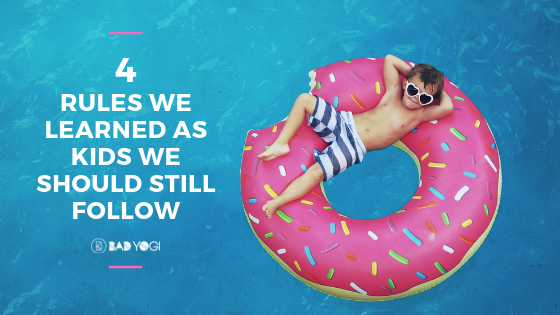 4 Rules We Learned As Kids We Should Still Follow

Spend 5 minutes on the internet and you’ll be graced with lovely things like Beyonce, puppies, and ASMR. But, on the flipside, you’ll also be met with Youtube videos of people ingesting disgusting amounts of food, abusive comments on Instagram, and politicians.

According to the Associated Press-NORC Center for Public Affairs Research at the University of Chicago did a survey and found that 74 percent of Americans believe they have become more rude as a nation.

It makes one yearn for the days when life was simpler, before I-phones, and reality television. Sometimes I like to imagine I’m living in the 1950’s, when everyone was so well groomed and actually had manners. People were polite and treated each other with respect; in 2019 it feels as if we’ve forgotten the word “etiquette” even exists. Mention the words “traditional” or “proper” and one immediately thinks of The Queen or maybe the Duchess of Cambridge if you’re thinking in modern times.

Why times have changed so much is hard to say, though the rise of technology and the internet could have been the start. The more we rely on social media, the less social we seem to become, and it’s damaging our society.

Back in the days, and I mean way far back, in kindergarten days, we were taught rules in the classroom that we should have carried into adulthood.

Turn on a CNN or Fox News debate and one will be lucky to hear any actual words. Most of the time, there are so many people talking it sounds like a chorus of birds squawking. Apparently, having differing opinions means it’s okay to interrupt each other, and/or talk at a louder volume.

Have you ever been in a conversation with someone and noticed that look on their face where they’re waiting for you to finish your sentence so they can start talking again? Sometimes you can even see their mouth open, like a dead fish, waiting for the second they can start a sentence they’ve been thinking of in their head.

Listening, and I mean TRULY listening, means taking in what another person has said, and focusing entirely on their words. It’s even more polite to nod your head, and acknowledge what they’re saying. Really listening to others will make them feel important (and don’t check your phone during the conversation.)

One of the first things we were taught as children was to share our toys, but as we’ve grown into adults we seem to get more and more possessive of our things.

Over the years I’ve taken the time to study the law of attraction, as many others have, and one thing really stuck out to me. When you hold on too tightly to money or your possessions, you are telling the universe that you don’t have enough. Feeling as if you don’t have enough means you’re sending out the energy of “lack.”

Spend money having faith that it will come back to you. For example, if you go out to dinner with a friend, why not treat them? They will feel happy and grateful, and you will feel good that you did something nice.

Sharing with others sends out an energy of “enough” and shows you have faith that you will receive even more in return.

3. Be respectful of others

Have you ever been in someone’s way, and rather than saying excuse me, they just barged right into you without so much as backward glance? Or, what about that moment when you’re walking down the sidewalk and two people taking up all the space don’t make any room for you?

It’s little things like that that make the difference between a considerate, respectful world in which we all treat each other with kindness, and a self-centered society that only cares about me, me, me.

Next time you have the opportunity to allow someone else to go ahead of you, or to help out a stranger in need, use it wisely. Think of it as a pay it forward gesture; one small act of kindness can rub off on a lot of people.

If there were one tip to encapsulate every rule we learned as kids, it would be this. Keeping this in the back of your mind at all times is what will help you become a better human being, and that will absolutely rub off on others.

Listening to others when they’re speaking, sharing things with someone, and being respectful of those close to you as well as strangers are all part of being kind.

Society at large could really use another year in kindergarten in which we all learn how to treat each other, but it can all start with you.