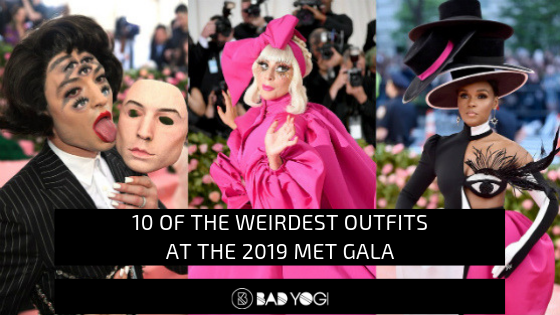 This week marked the first Monday of May, and we all know what that means – it was time for the annual Met Gala, which is basically like the Oscars of fashion. It’s not uncommon to see really weird fashion at events like this, but this year’s outfits were even more over the top.

According to Today, this year’s theme was “Camp: Notes on Fashion”. At first glance, you might expect that this meant celebrities showed up in their camouflage pants and hiking boots, but that is not what the theme means at all. The “Camp” theme was inspired by writer and activist Susan Sontag’s 1964 essay “Notes on ‘Camp'”, which explored a style of fashion that embraces ironic and exaggerated styles. With fashion at these events usually being, well, unusual, it’s safe to say that a lot of people expected this year’s outfits to be way over the top – and fashion designers did not disappoint.

Light up the world

Katy Perry literally lit up the pink carpet, wearing a chandelier dress. We wouldn’t have thought this outfit possible, but here we are. We wonder how heavy that headpiece is. It’s bound to give you a headache if you wear it for an extended period of time. The things people do for fashion… 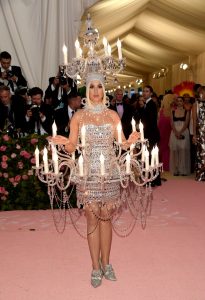 Off with his head!

There’s no weirder fashion accessory than your own head. Jared Leto arrived at the Met Gala carrying a replica of his own head. It looks very lifelike too. It doesn’t get any weirder than this. 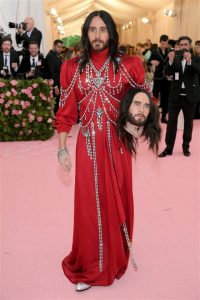 Big headpieces seemed to be popular. Cara Delevinge strutted the red carpet in a rainbow-colored dress with an array of weird props sprouting from her head – bananas, eyes, dentures… We think she nailed “weird”. 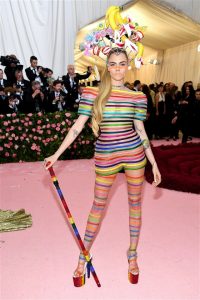 Can we all take a moment to appreciate Michael Urie’s outfit? This is the definition of a hybrid dress and we love how his face countered the outfit. 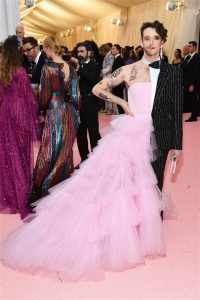 Daenerys would love this outfit

Florence Welch wasn’t wearing something we’d call weird, but it’s definitely worth mentioning. Does the cape make anyone else think of “Game of Thrones”? We can’t help but be in love with this one. 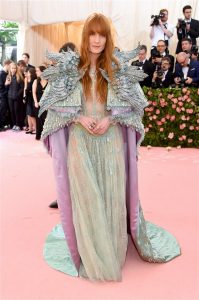 Make way for the dress

Everyone had to make way for Cardi B. Wearing a red dress with a massive train, no one could miss her. 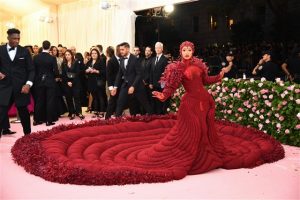 It wasn’t so much Ezra Miller’s outfit that stole the show as it was his makeup. We feel like we’re looking at one of those three-dimensional images that totally freak your brain out. Those eyes look so real. Kudos to the makeup artist. 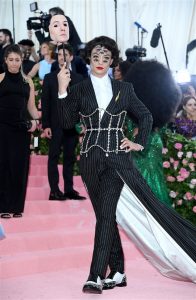 Hats are like potato chips, you can’t have just one

Janelle Monae wore a larger-than-life outfit featuring her favorite black and white theme. We have no idea how all those hats stayed on top of her head. 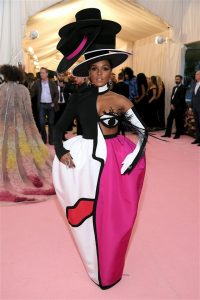 Billy Porter arrived at the gala like a real style god, carried by his “subjects”. 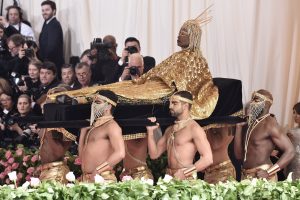 Moments later, he spread his golden wings. This is definitely one of the outfits that stole the show. 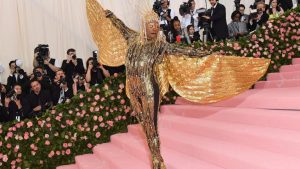 The queen of all things weird and extravagant

If we had to name someone the queen of weird, Lady Gaga would be our girl – and she didn’t disappoint. 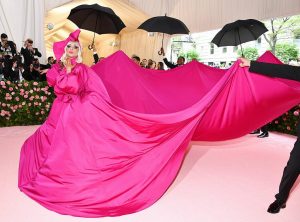 She didn’t arrive in just one outfit – it turned out that she had four different outfits up her sleeve, which she wore in a matter of minutes. We expected nothing less. 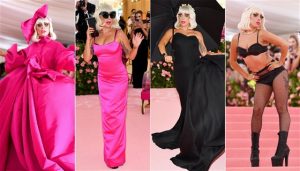 What did you think of the outfits at this year’s Met Gala? Sound off in the comments!