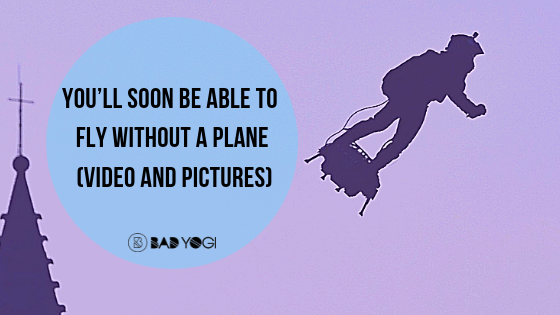 Did you watch Peter Pan as a kid? Did you dream of flying through the air, weightless like a feather just like Pan? Well, that dream might still come true before you die, thanks to Franky Zapata.

If your one big dream has always been to fly, you and Zapata have something in common – he was determined to manage it when he was still a kid, and now that he’s all grown up, he’s making all his dreams come true. According to CNN, an airplane wasn’t enough of a flying experience for Zapata – he wanted to fly like a bird.

Zapata, who is a French inventor and entrepreneur, was born colorblind, so there was no way he could even partially live out his dream as a pilot. He wasn’t about to give up though, flying airplanes wasn’t what he wanted to do anyway, he wanted to fly solo – literally. Zapata spent a lot of years racing jet skis, and eventually invented hydrojets which allowed him to actually float above the water. He wanted to fly, and even though driving the hydrojet a few inches above the water was far from actually flying, it was only the beginning of his inventions.

As technology started to improve, Zapata started to see more opportunities to create something that will help him to take to the skies, and at this year’s Bastille Day in France, he finally showed the world what is probably one of the greatest inventions in the past few years- a flying board. Yep, it’s a board that literally flies – and it takes you with it, making you look more like Peter Pan than you could ever have thought possible.

Zapata spent three years creating this magnificent invention, called the Flyboard Air. It’s a jet-powered personal aerial vehicle, and it’s every bit as cool as it sounds. Zapata built it by placing five turbine engines over conventional electric propellers which allows intuitive flight controls designed around the human body. The board can go as high as 500 feet (and has the potential to go even higher) and can reach a speed of 140 kilometers per hour. That’s wild. 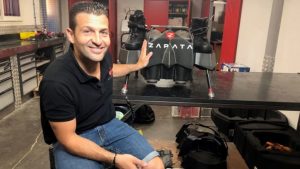 Zapata, of course, is very thrilled with his invention, but how do you manage it up there in the air? Zapata explains, “When you fly with your body, even your hands affect the direction you want to go in. You feel the turbulence and the air through your fingers. It’s like becoming a bird. But it’s also very hard. I have to fight against the wind with my legs so there’s pain too. It’s not as peaceful as it looks.” Well, that’s not exactly the Peter Pan experience we thought it would be, but we have to admit that it’s pretty cool, and Zapata will probably soon have a solution to that too. 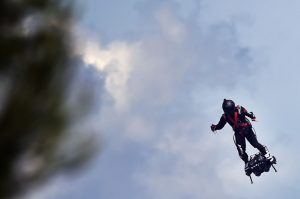 Zapata says that flying is not as easy as it looks from the ground.
Image: AFP

Doing it for the sake of freedom

Zapata enjoyed showing off his amazing creation to the crowds this year on Bastille Day, but he says he really loves to fly alone without anyone watching. For him, the flying is all about the feeling of freedom it brings: “It’s amazing when I’m flying around the Arizona desert, through the mountains. That’s why I built this machine. In my heart, the best thing is the freedom.” 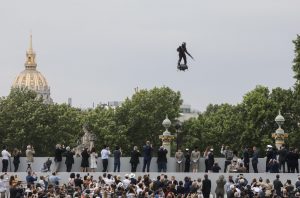 Crowds were wowed by this amazing invention when Zapata took to the skies on Bastille Day.
Image: AFP

Zapata says that, before anyone else can start to use the flying board, some regulations and safety issues would have to be looked at first. You see, even though Zapata makes it look so easy, the flying board is not nearly that easy to operate or fly on. “The problem with this machine is if you’re not calm you can break your neck. You have to be focused. It’s not a skateboard. It’s a flying machine,” Zapata says. Who knew flying could prove to be so difficult? 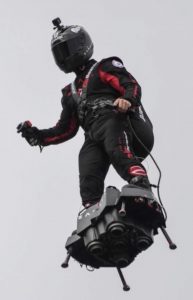 A lot of safety regulations will have to be put in place before everyone can use Zapata’s invention.
Image: Twitter

Even the military loves his invention

The military also showed interest in Zapata’s design – the French military has already invested 1.4 million dollars in tests of the board, with the US also showing interest. Zapata says that it definitely wasn’t an opportunity he was going to pass up. “If the question is do I think I will sell this to special forces all over the world, the answer is yes. When? I don’t know,” he says. 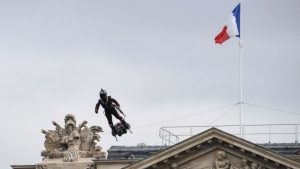 Zapata’s flying board can go as high as 500 feet.
Image: ALAIN JOCARD/AFP/Getty Images

Find a dream, make it real

For now, he just enjoys flying with his own invention. He never thought of creating the machine to make money, and according to him, that should never be your main goal when you start a project like this.

“If you want to build a flying machine you need to want to fly. You can’t be chasing fame or money. You have to have that crazy dream to justify spending all that money on something that only you believe in.”

Well, all of us can definitely take something away from that. Who knows, perhaps Zapata’s flying board will be available commercially sooner than we think. And then we all just need to relax when we take to the air. As Peter Pan so famously said, “All you need is faith, trust, and pixie dust.”

You can have a look at Zapata and his flying board in action in the video below.