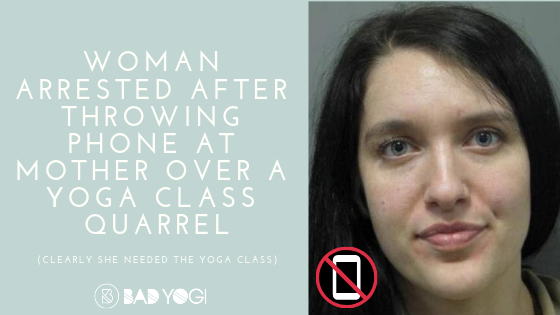 Every family has its problems. Family can make us cry and sometimes they make us laugh. If you think that your family is pretty much nuts, wait until you hear about the latest family drama that made the news.

Yahoo Lifestyle reports that last month, a Maryland woman was arrested because she threw her phone at her mother’s head after she refused to drive her to a yoga class.

30-year-old Holly Albert seemed to really have needed that class because, first of all, throwing someone with something is never a good idea and secondly, we all know phones are ridiculously expensive and throwing them means that they could potentially break. Albert must’ve really needed some zen. Unfortunately, instead of making it to that much-needed class, she got a visit from the police. Now that is enough to ruin anyone’s day.

This incident is actually “old news” since it happened way back in August 2017, but Albert only got arrested this February. Albert, who is unemployed, still lives with her parents and it has been revealed that she wanted to attend the yoga class in question for meditative purposes. It’s all starting to make sense now.

Albert’s mother called the cops on her

Luckily, the phone didn’t break after Albert threw it. Her mother took the very same phone after it struck her and used it to call 911. When the police arrived, they reportedly found her with a cut to the head and a bloodied shirt.

Head wounds do tend to be drama queens, as anyone who’s cut their head open very well knows, but police took the situation very seriously and now Albert has officially been charged with second-degree assault.

Since this new development, Albert’s parents have assured her that they are standing by her side and that they are going to support her. They even hired a defense attorney and her mother wrote a statement to the court in which she defends Albert. The statement makes it clear that she and her husband have never felt threatened by their daughter and don’t mind her staying with them.

The statement by Albert’s mother read, “Moreover, I believe that it is in Holly Anne’s best interest that she continues to reside with us, rather than have to make other living arrangements pending a future trial date. Holly Anne is currently unemployed and we are providing her with financial and other support at this time. It is Holly Anne’s wish and decision to address and resolve the subject proceeding, and to that end, she is voluntarily surrendering herself to the outstanding warrant. Knowing Holly Anne as I do, I am confident that she intends to appear at every court date necessary to bring this matter to a close.”

It seems that Albert’s mother already buried the hatchet with her daughter. The preliminary hearing however, is inevitable, taking place on March 19. This might make kids think twice about throwing their parents with random objects, especially if that object is capable of calling 911. One can’t argue that this makes for some classic sitcom family drama. You can’t make this stuff up.

Something we can all take away from this is to plan our much-needed yoga classes well beforehand and if you can’t drive there yourself, we suggest online classes. They’re great too, and then you can get that much-needed zen fix when you most need it, before throwing someone with something you’ll still regret almost two years later.