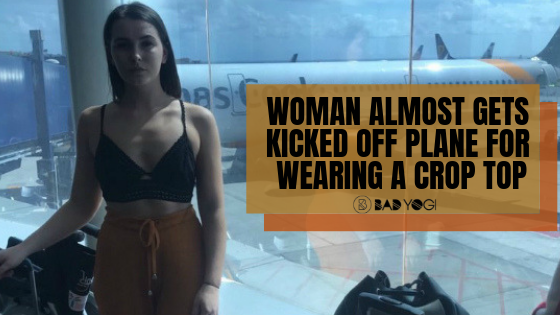 We live in a time where most women finally have the freedom to wear whatever they want. Many women like to show some skin – for some, it’s a celebration of their bodies. Your choice of clothes is a form of self-expression and it’s kind of obvious that it should be respected, but when it comes to wearing what you want in certain public places, it can get tricky.

Emily O’Connor had a bit of a bad run-in with Thomas Cook Airlines when she stepped on a plane wearing some high waist loose-fitting pants paired with a crop top. According to CNN, the cabin crew told her that her outfit was causing offense and that she had to cover up. Should she refuse, they would offload her from the flight. O’Connor was very upset and couldn’t understand why she had to cover up since she’d been going through the airport in the same clothing without any trouble. She added that the airline didn’t stipulate a specific dress code online either. Upon being asked to cover up by the cabin crew, she stood up and asked passengers whether they found her outfit offensive. The silence was deafening.

After this, the flight manager and four of the staff told her to put on a jacket or else they would be forced to remove her from the plane. They were about to remove her luggage from the flight when O’Connor’s cousin, who was with her, offered her a jacket. The staff watched O’Connor with a hawk’s eye until she put the jacket on. O’Connor said that afterward, some comments were made over the speaker about the situation. She tweeted about the whole affair, expressing her unhappiness with the airline, saying that one male passenger told her “shut up you pathetic woman. Put a f*cking jacket on” and staff didn’t say anything to reprimand him.

Flying from Bham to Tenerife, Thomas Cook told me that they were going to remove me from the flight if I didn’t “cover up” as I was “causing offence” and was “inappropriate”. They had 4 flight staff around me to get my luggage to take me off the plane. pic.twitter.com/r28nvSYaoY

Social media users weighed in on the situation

People on Twitter took note of the spectacle and most thought that the whole situation had been very unnecessary and that the crew had no right to tell O’Connor what to wear.

Erm how about we teach our women to feel confident in whatever they chose wear? Looks super comfy this outfit, which is what you want when sat on a plane. Nothing annoys me more than people thinking they can tell others what to do/how to dress. Give it a rest Ann.

There’s no policy there that states what is inappropriate with regards to dressing. What they did to her was disrespectful.
Pure harassment!

I’m crew myself and would not think twice to ask you to cover up, there is no policy on what you can and cannot wear! That is awful to see that the crew on board made you feel that way, disgusting!

Sue them. Take them to the cleaners. It’s the single complaining man they should have thrown off the plane

Others thought that she should just have put a jacket on without making a fuss about it and that an airplane is no place to dress like you’re on holiday.

Well Emily I wouldn’t have been offended but that certainly isn’t the way for a young lady to dress on an airplane to be honest. Holiday starts the other end. Ditto men without shirts on

Policy or no policy…the airline crew had a right to protect themselves & other customers. I don’t justify the harrassment but her initial attitude didn’t help matters. If she feels harassed, then sue them!

You probably made a scene with your refusal & stubbornness….it shouldn’t have gotten that bad…

The airline does have a dress code

The airline had apologized to O’Connor since, saying that they could have handled the situation better. They released a statement in which they confirmed that they do indeed have an appropriate attire policy and that most other airlines do too. It applies to both men and women equally. They added that unfortunately, the crew is responsible for the difficult task of implementing dress code rules and that they don’t always get it right.

The airline’s clothing policy stipulates that no inappropriate attire, which includes clothes that display offensive images or slogans, are allowed to be worn and those wearing them will not be allowed on the flight unless they change their clothes. It also adds that passengers have to wear shoes on the plane.

What the heck should and shouldn’t you wear these days?

This is no easy topic and definitely not one everyone can agree upon. So, O’Connor was wearing a top that pretty much looked like what you would wear when going to a yoga class or the gym. Should it be considered appropriate to wear while traveling with a couple hundred other people? Maybe, maybe not. It might all depend on your perception of what you deem “appropriate”. It will not be the same for everyone. There’s also the issue of what exactly is deemed as “inappropriate”.  Why would a crop top be seen as inappropriate clothing? Is it because O’Connor’s looked like a bra or simply because it showed some skin? One could argue that some tank tops show almost just as much skin. Where does one draw the line?

So, getting to the root of it – there’s nothing wrong with wearing a crop top. Question is, is it appropriate to wear this kind of clothing everywhere? If you’re attending a job interview, for example, it’s obvious that you’re going to wear something that is appropriate for the setting you’re going to find yourself in. You’d want to look formal and presentable. You’d want your potential employer to see you as a put-together and professional person. The same goes for when you’re traveling by plane. We’re not saying you should wear a pencil skirt and formal shirt, but do keep in mind that you’re traveling alongside people from different places and different backgrounds. When you look at the way the flight attendants dress, you get a pretty good idea of the setting you’re finding yourself in. When you think about it, it’s not really a crop top zone, is it?

Looking at it from another angle, it is true that some flights are super long and you’ll find that most people wear pretty informal and comfortable clothing. So again, is it so wrong if someone decides that a crop top is comfortable and goes for it? The way the airline handled the situation was definitely not right and perhaps O’Connor could also have handled the situation better. It might also have helped if the airline had stipulated its appropriate attire policy more clearly and made it very visible on their website.

When you’re choosing an outfit knowing that you’re going to be making use of some form of public transport, it might be wise to be extra mindful. Ask yourself whether the clothes you’re wearing is appropriate for where you’re going and the people you’re going to interact with. Yes, you should be allowed to wear what you like, but just as you have the right to enjoy what you’re wearing, other people have the right to have their opinions and feelings about it. It’s a two-way street and perhaps by being more mindful, we can make life easier for ourselves and others.

What are your thoughts on this? Should women be allowed to wear whatever they want wherever they want or are there certain boundaries? Sound off in the comments!