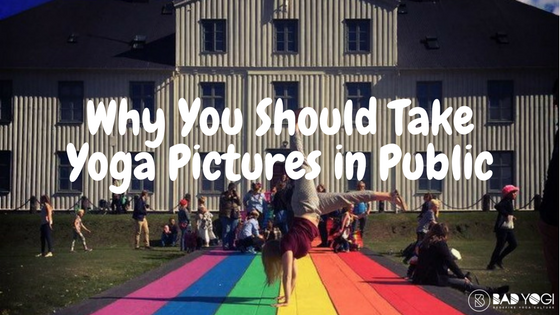 Why You Should Take Yoga Pictures in Public

I have (almost) completely accepted being the weird person that jumps into a warrior two flow at the airport or does a handstand picture in a touristy place.

I have accepted that. Most of the time.

Of course, I feel self-conscious. And of course, I want my attempts to be perfect, instead of needing to try a few times to stick that handstand (for long enough to take a picture).

And it also depends on the environment, do I have plenty of space? Is it safe?

Asking people to take a picture of me doing yoga was a big step, and I would only ask the ones I fully trusted. The ones I could be vulnerable with.

Having one person there to take my picture was enough of a challenge, and then doing that pose among other people, strangers or not, was an even bigger challenge.

What will they think? Because of course, I expect them all to think “what the hell does she think she is? She held that handstand for a second, that doesn´t even count.”

Have you ever watched a person really try something and “fail” at it? Did you think something like that about that person? Me neither.

And I know this. I have even had people walk up to me and complement me for something I did. I know this. People respect those who are willing to be vulnerable and willing to try.

I know this. And still my thoughts can go into destructive mode, when among people.

I remember the first time a yoga picture was taken of me among other people.

I have Erin to thank (and curse) for it. It was part of a Bad Yogi Instagram challenge, and it was supposed to be a picture taken in public.

At that exact day, my friend was getting married. She is one of those people that makes me a much better person, and can, without even meaning to, push me where I need to be pushed.

So yes, I knew I needed to take that picture. And I didn’t want to.

I told her this. I said that I needed to take a picture. And her answer was some combination of “So what?” and “What are you waiting for?”. Of course, I should take a picture in her wedding reception! It would be cool!

And with many deep breaths, I did. Did anyone notice? I’m not really sure.

Since then, I’ve gone a long way. I have taken yoga pictures in many places.

And I always feel vulnerable. It is like opening my heart out to the world.

And when I share that picture, I always feel strong.

In a town square in Amsterdam, I even had a young man (holding a beer), run up to me to “help” me with my handstand. That is the most fun picture I’ve ever taken.

My yoga pictures capture my state at that exact moment. They capture my memories, my thoughts, my feelings.

They are great to motivate you to go further, while still showing you how far you’ve come.

And most importantly, they push me forward. They make me take a leap out of my comfort zone.

Taking a yoga picture in public is such a vulnerable thing for me.

And that is why it’s so important.

It helps me grow.

Is taking pictures in public part of your yoga practice? Or does it totally freak you out? Share your feelings in the comments! 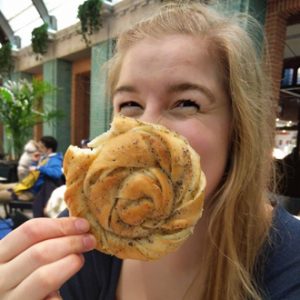