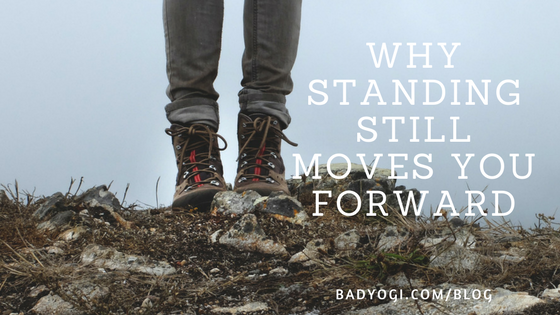 Why Standing Still Moves You Forward

I run all day long.

From breakfast meetings, to yoga, to the farmers market, to move the car, to office fly bys, to client check ins, to conference calls which often take place with me huddled up against a wall in the subway because I can’t get from a to b fast enough to be sitting at a desk—something I do not do well anyway.

For as long as I can remember people have commented on the speed and constancy with which I move.

Catch her if you can.

But then one day all that running around caught up with me.

I was running late and was going to blow off a date with an acquaintance—one of those ”lets get coffee sometime” meetings that was now actually HERE and loomed as a nuisance and a distraction to all that was running through my head.

I thought about it as I was rushing in the direction of the coffee shop and realized that it would now take more effort to get out of it than it would to get on with it. So I went in.

As soon as i sat down i said: “i have to go in a minute. Sorry, I don’t really have time to talk too long” to which she shocked me by saying:

“ oh, then why don’t you leave now and we reschedule. we wont have a good conversation if you are preoccupied with leaving”.

I took my coat off and took my phone off the table and put it in my purse and thanked her.

We proceeded to talk for an hour and a half about everything and nothing and I felt calm, content, rooted. For the first time in FOREVER, I was not distracted. It was a feeling of being connected to the world as opposed to being some sort of unguided missile flying out into the stratosphere.

So I decided to see what standing still was like, and more importantly, if I could even DO IT.

Standing still is perhaps the most contradictory activity in which we can engage. While we are seemingly just “standing there”, in fact we are challenging ourselves both physically and mentally, using every muscle in our bodies, strong, deliberate breath and an iron willed focus.

All to do that which our culture regards as doing “NOTHING”.

To many, to stand still is to stagnate. To lose momentum. Not to keep up with progress.

The truth is, many consider standing still as falling behind.

It helps me to see things and in that moment of truly “seeing”, the world looks different to me. Or maybe it doesn’t LOOK different, maybe its just that I am FINALLY LOOKING at it instead of it being a blur in my rearview mirror.

When I am standing still I can listen. When I am talking and planning my next clever response, I cannot hear a thing.

When I can see and hear, I can learn new things. I can change. I can grow. That is perhaps why trees are so big. They stand still and witness the seasons, the rain, the sunshine, the animals in their cycles. They gather up strength from the earth below. From their deep place in the earth they reach into the air—rooted yet light.

They stand still but they don’t stay the same. Running around all the time allows me to stay the same because nothing has the time to change me.

It’s possible that being patient and gathering our energy may allow us to do what we THINK running around trying to change things will achieve.

How can we change what we cannot really see or understand because we are too busy running past it to get to the next IT?

Constant activity does not allow us the opportunity to see things as they are…the world is a blur of movement instead of a place of peace, stillness and contemplation.

And it is in those moments of quiet that change has a chance. Starting with our own selves.
Too often we believe that what needs change is the world around us. In some ways, it seems easier to change the OUTSIDE world—maybe because that change requires overt ACTION. RECYCLE. BE KIND. EAT RIGHT.

The change we might most benefit from in ourselves is not usually visible-unless it is something as obvious as wanting to lose or gain weight. Typically, the changes one wants to make in oneself are more abstract and require deep analysis in order to identify them and then a quiet introspection to allow and acknowledge their existence and effect on our selves and how we can come to peace with it.

Ironically, coincidentally, cosmically, as I have been challenging myself to stand still and listen, today I was able to HEAR my yoga teacher, say what I probably would never even have registered two weeks ago because I would have been fidgeting around wondering if I should go to a movie or stay home and do the laundry.

She quoted Mr. Iyengar: “Intimacy with another is only possible when we are first able to be intimate with ourselves. And the only way that can happen is if we take the time to go INSIDE instead of always living on the OUTSIDE.”

On this January day I thought there might be something going on here that is not only a philosophical truth, but also a practical one.

Face it– it’s cold OUTSIDE. Its warm INSIDE.

I think I’ll go there and stand still a while.

Have you found the importance of standing still in your own life? Share your thoughts and experiences with us in the comments! 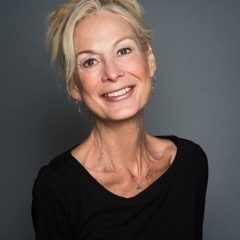 “The truth is at the heart of all that moves us.” Gail Anne Grosso’s philosophy has guided her work in all aspects of marketing communications As a branding, film and creative director in both advertising and public relations, the beauty and power of her work is in its simplicity. “Understanding and respecting the person you are talking to; where their heads and hearts are, is essential regardless of platform, medium or purpose. She has been practicing yoga for 30 years and sat on the board of directors for the Iyengar Institute in New York. She considers and gives gratitude for the lessons learned from her primary and most gifted teachers Rodney Yee and Colleen Saidman Yee. She is also the author of a novel entitled The Other Side of Nice.