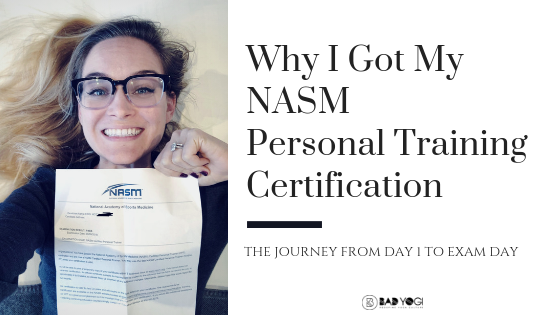 Why I Got My NASM Personal Trainer Certification

Yes, your girl is now not just a Yoga Teacher but ALSO a NASM Certified Personal Trainer and I could not be prouder! So how did all of this come to be? Oh there’s a story…

I turned 30 in January and decided to get in the best shape of my life. I debated getting a personal trainer to help guide me, but they were SO expensive, there’s a language barrier, and the ones I found in Nice just didn’t impress me. I know that sounds mean, but I’m being honest here!

I figured I could learn enough to train myself into the “best shape of my life,” but then it occurred to me that once I started, I’d probably get questions from the community. Of course I’m always happy to share, but I wanted to be able to share with a bit more credibility. And then it clicked! “Ahhh, I can get certified so that I can not only train myself properly, but I can also share what I’m doing with a good conscience!”

I wanted to do something legit and science-based, so I knew the National Academy of Sports Medicine was the way to go. The studying was a lot of work and the exam was a beast, but I’m so so glad (and proud!) I did it. 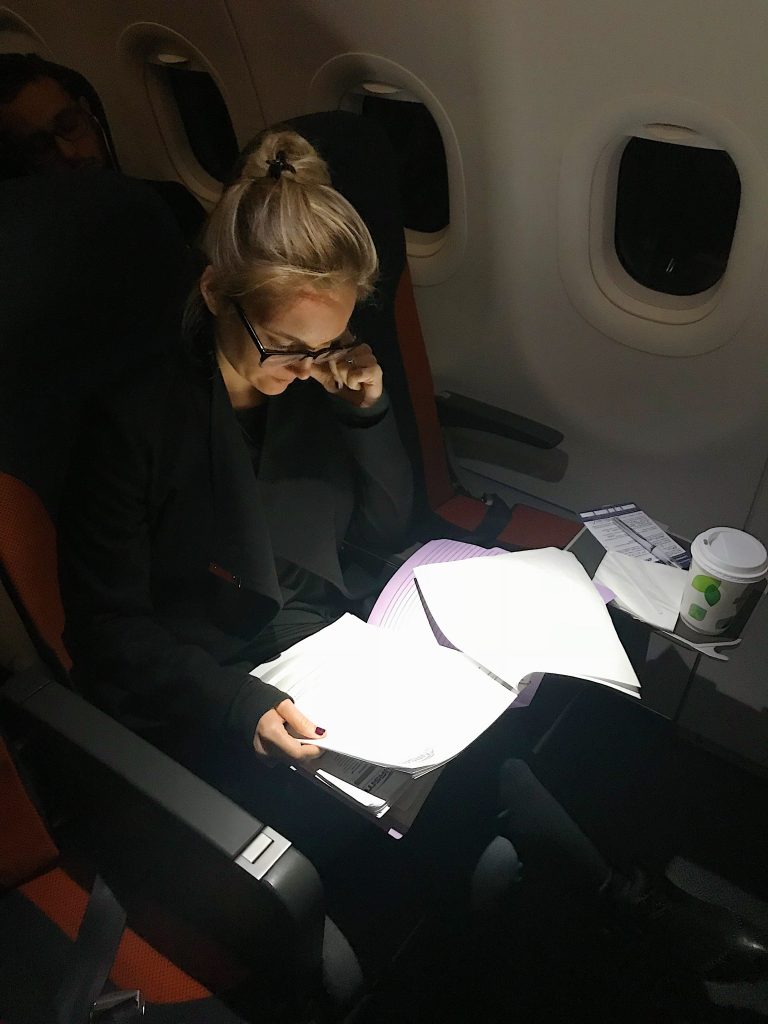 How long did it take to study?
I started in January and took the exam in September, but depending on your schedule, it might take you more or less time. I read the 600 page text book in about 2 months, so I took my time there. Then I printed all the study materials from the NASM site, like the study guide and resources, and focused hard on those until the test day. I was constantly testing things on myself and Adrien who was always a good sport to let me use him as a guinea pig 😉

What are you gonna do with this certification?!
Don’t worry– Bad Yogi as you know it is NOT going anywhere. We’re still the same around here, just armed with a bit more expertise. I’m a yogi at my core, but strength training is something I wanted to add back into my personal routine for a long time and I’m soooo happy I did. I’ve worked out for many years and had periods of time where I was more serious about it than others. This was something I actually dreamt of doing in college but couldn’t afford it, so it’s really cool that I got to do it now. I’ll also be able to share practical information with those of you who want to add in strength training but have no clue where to start or how to do it safely and effectively. So stay tuned for more on that 🙂

The Insane Exam Story:
NASM is an American company but they’re recognized internationally, so I was able to sit for my exam in Edinburgh, Scotland.

I was super nervous to take the exam, and when we got to the test center, I was immediately freaked out. I expected an American style building– clean, relatively new, and modern. This is NOT what I got! It was tucked away in a back corner of an industrial park which made me wonder if I put in the address wrong, haha! But this was the closest place to Nice I could get, so whatever– I just had to go in, take the exam, pass, and GTFO, right?

The team administering the test also administered hundreds of others, so the NASM CPT exam was just one of many they offered that day. They led me to a computer in a closed room with a camera above the desk which I was supposed to wave at in case anything went wrong or I had an issue. There were about 10 people taking other exams around me, so the room was supposed to be silent. They told me not to come out of the room until I was finished, and really stressed that I should wave at the camera if I had any issues. Noted!

They set me up on my computer, told me I had 2 hours to complete the exam, and I was off to the races.

Until my computer froze. I’m already anxious about taking this, so this wasn’t a welcome distraction, but I stayed calm and waved to the camera so they’d come in and help. Five minutes later, no one came, so I opened the door and let them know my computer froze. The guy looked frazzled about me coming out early, but eagerly came in to troubleshoot and hush me, lol.

15 minutes passed and the computer would NOT work. So they switched me to another computer which had to be started from scratch, INCLUDING installing the java script, updating Windows, and resetting their password so they could actually login to the exam software! This sounds funny as I write it, but I was SOO anxious at this point because it all felt like SUCH a mess!! At this point, my anxiety was mounting BIG TIME. I just wanted to get this DONE!

The computer is up and running a few minutes later, and again, I was off to the races! The exam was challenging, and a little tricky. I felt like I was prepared and knowledgable, but was SO nervous that I was taking so much time per question. My mind was racing with thoughts of inadequacy and doubt… “Maybe I didn’t know this so well after all. Should it be this hard? I spent all this money and all this time pursuing this certification, what if I don’t pass? This will be such a waste!” My heart was POUNDING and I was barely halfway through the test. I thought my anxiety would bubble over and I’d just pass out.

And then for seemingly no reason at all, my second computer SHUT DOWN ENTIRELY. I kid you not! The screen literally turned black, the whole thing turned off, and then started up again on that Windows blue screen with the old school white text flashing all around. It took everything inside me not to just burst into tears.

Keep in mind the room is still silent, so I’m trying to panic quietly and raise my hand at this stupid camera hoping they actually see me and come quickly! Another 5 minutes pass and nothing. So I walk out again, this time with a bit more attitude, and tell them what happened. They look confused (which was not comforting), and rush in to see what happened. They ask me a bunch of questions, casually tell me that “something must have needed to update” and continue to troubleshoot for the next HALF HOUR.

No joke, I have not experienced such intense, heart-pounding anxiety in a very long time.

Luckily, once the computer was up and running, my exam actually picked up right where I left off without any progress lost! THANK GOD! I picked up where I was and banged through the last half at twice the speed as before. I felt confident, but also completely desperate to be done with this. I finished quickly to beat the time and when the exam finally ended I waited breathlessly to see that magical word: PASS.

Except it didn’t come. The screen was blank and all it said was, “Please see the exam administer and follow their instructions.” Um, okay. I walked out again, told him I finished, and he asked me if I passed. I said I didn’t know and reiterated what the computer screen said. He was confused. AGAIN.

He did some tap-tap-tapping on his computer and said I’d find out if I passed within SIX WEEKS! Okay now I was really about to cry, lol. I was like, “there is NO WAY!!! I’m supposed to find out NOW! YOU HAVE TO TELL ME NOW!” I told him to look again, to find my information and see if he could print anything for me because NASM told me I’d find out the same day. He did some digging, eventually found confirmation that I’d just taken the exam and printed the confirmation from NASM…

Cue the gigantic sigh of relief. So anticlimactic, right?! He printed out that paper and I ran out of there like my head was on fire. I’ve never been so eager to leave a place, SO relieved, and SO celebratory all at the same time!

For the past week I’ve just been occasionally flashing back to all that studying and preparation and THAT EXAM, reminding myself that, WOW, I really did it! Is that really over?! Did I really do that on top of everything else we have going on?! Holy crap!

I’m still kind of amazed that it’s finished! I’m thrilled to have added this extra knowledge to my arsenal and will look forward to sharing what I learned with all of you. I just had to tell you this story because it was seriously intense.

While I was prepping for this exam, I also…
– Traveled to the US for a month & taught 6 workshops
– Traveled to Austria & taught 4 workshops
– Launched, sold out, & planned for 2 retreats
– Planned, designed, & launched a whole new line of shirts
– Planned, filmed & prepped for PBYP Resolution
– Kept up with Bad Yogi Studio classes, free classes for YouTube, launched & recorded Season 2 of the podcast, maintained a steady 4-5 day/week gym & yoga habit, went on a few other trips, and continued working on day-to-day stuff, plus plenty more I won’t bore you with on this list 😉

Yes, it was hard. But hard things are worth the trouble. 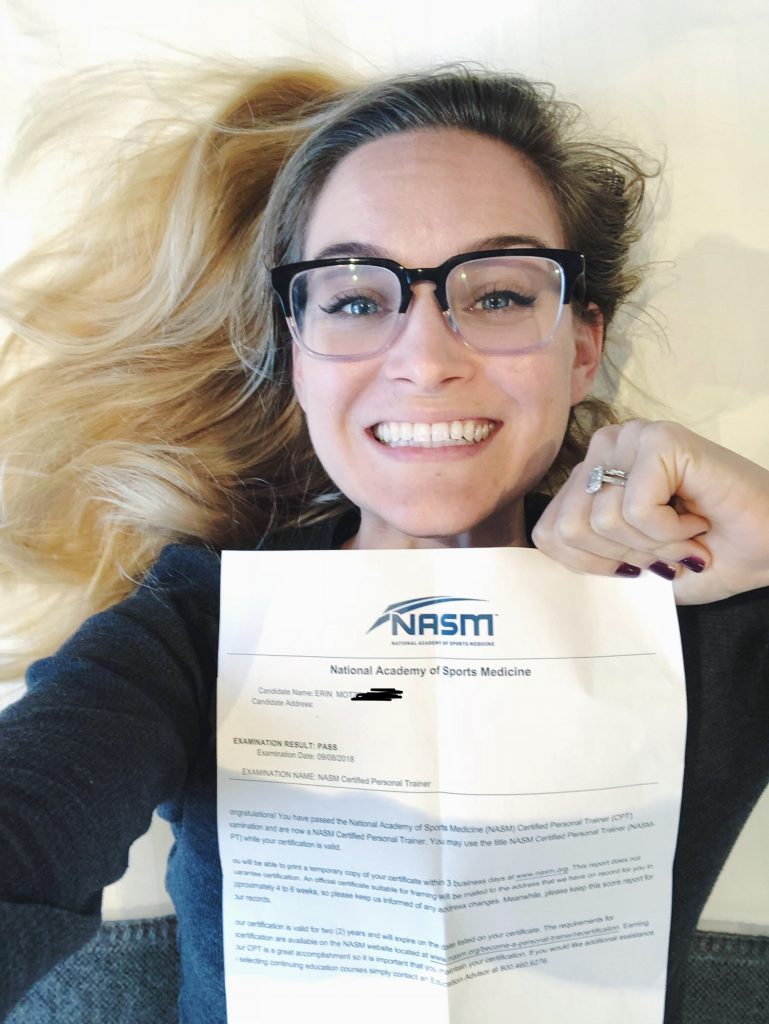 Over to you! What questions do you have?! What do you most want to know about? Tell me everything– I’ll do my best to answer questions below!