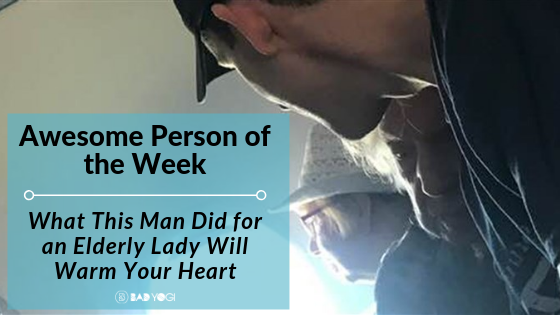 Awesome Person of the Week: What This Man Did for an Elderly Lady Will Warm Your Heart

When educator Megan Schofield boarded her flight to Nashville, she could never have dreamed that she would witness a beautiful act of kindness that would end up on news outlets all over the United States.

According to Today, Schofield found herself sitting close to a 96-year-old woman. She quickly learned that the elderly lady had not flown in 15 years, and was terrified of doing so. A kind man, Ben Miller, was on the flight too, and he ended up sitting next to the 96-year-old woman, who was on her way to Kansas City to spend her 96th birthday. When she showed signs of distress during the flight, she would turn to Miller, who would then console her. 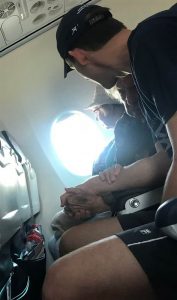 Schofield says that she took notice of the lady because she reminded her so much of her recently departed grandmother. She recalls thinking that if it was her grandmother who was in a similar situation, she would’ve been so grateful for a good samaritan like Miller.

“Throughout the flight, she turned to him for consoling. He just really tried to make her feel comfortable through the whole flight. During turbulence, which is one of those pictures when she was hugging him, he helped her out. And then again during landing. Anytime there was a little bit of a reason why she would be a little bit scared, she turned to him for comfort.”

Miller’s kind act stayed with Schofield long after the flight was over, and a few days later, she decided to post about it on Facebook. In the post, she says that she walked away from that flight crying happy tears because she was just so thankful that there are still amazing people like Miller in the world. She added that the elderly lady was incredibly grateful to Miller: “She was so grateful that she wanted him to have her flight pretzels. Hats off to you sir, for your kind heart and your compassion toward someone whom you’ve never met. I have never been so touched on a flight before. This truly made my week.”

Miller eventually saw it too

The post quickly went viral, and it has been shared more than 78,000 times. The news spread so far that a family member of Miller eventually saw it and asked him whether he was the man in the post. Finding out that what he had done had gone viral was pretty surreal for Miller. “I don’t even know that I necessarily appreciate it. I’m not a Facebook person myself. And so it was pretty wild. I was traveling alone, I didn’t know anybody on the plane. You certainly don’t think anybody is paying attention to you. So to get a text from somebody a few days later after the flight saying, ‘Hey, is this you?’ It’s crazy.”

Not taking all the credit

For Miller, it wasn’t just his random act of kindness that sparked all the reactions to the post, but also the way Schofield had shaped it through words. “To see what it’s done in terms of taking off, I think Megan really gets the credit for that because I think the interaction that I had with Virginia was maybe somewhat unique, but I’d like to think that it wasn’t all that uncommon.” 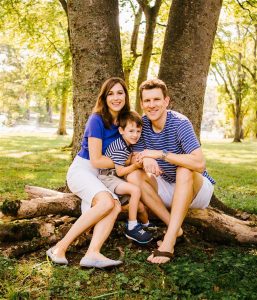 Look for different ways to be kind

Schofield is just happy to have been able to share the beautiful moment and hopes that it will encourage others to always look for ways they can help other people, especially when they are traveling. “We’re just so rush, rush, rush to get from A to B. Slow down and look around and see where you can be helpful,” she said. 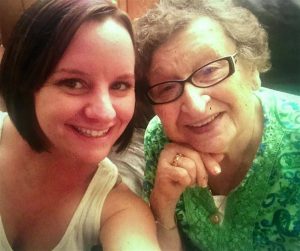 The lady on the plane reminded Schofield of her own grandmother.
Image: Megan Schofield

We can totally get behind this. All of us tend to be pretty rushed while traveling. We’re so focused on getting to our destination that we sometimes forget to look around us to see who might need help with their luggage, or who seems a bit lost or even sad. We can help those around us in various ways. Human beings are capable of so much kindness, we should really try to make it a priority all day, every day. So go ahead and see what you can do to help someone today, no matter how small.