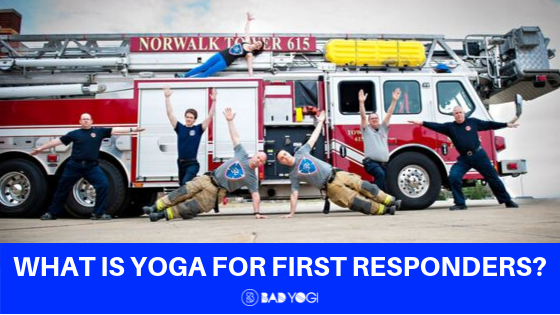 What is Yoga for First Responders?

We’re all very appreciative of first responders. Most of us have family or friends whose lives were saved by these brave men and women. Our own lives might be saved by them in the future. But how much time do we spend appreciating the fact that these people show up to very stressful jobs every day? The founder of the non-profit organization Yoga for First Responders (YFFR), Olivia Mead, thought it important to take care of these people in the best way possible – by helping them to get on a yoga mat.

It’s no secret that yoga is great for relaxation and can fight off anxiety and depression, therefore, it seems like it should actually be compulsory for first responders all over the world. According to DoYouYoga, Mead was thinking along these lines, and that’s how she came up with the organization. The idea already started to take form in her mind while she was studying yoga: “As I was studying yoga, I realized the original intention of it is to train Warriors. First responders are out there in domestic combat really, day in and day out. And then they go home to their family, and they have to do this 180 emotional transition… I saw that yoga was a solution.” 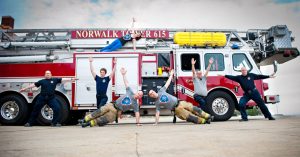 Mead got the idea for the organization while studying yoga.
Image: Yoga for First Responders

Bringing yoga to those who need it most

Most of us can probably agree that yoga has the power to fix basically anything, and with first responders, it’s no different. YFFR’s mission is to bring the calming and healing powers of yoga to those who need it most – firefighters, police officers, veterans, and military. As Mead puts it, YFFR’s main mission is “bringing yoga philosophy, through somatic and cognitive exercises, to practical applications for first responders and military around the country.”

Mead took the task she had set to herself very seriously, undergoing training at the fire and police academy to gain first-hand experience of what a typical day at work is like for these people. This enabled her to create classes that provide first responders with more than just a good stretch and relaxation. YFFR’s classes focus on teaching first responders the necessary skills to self-regulate their stress and emotions. This helps them to do a better job and effectively leave work behind when they go home at the end of the day. 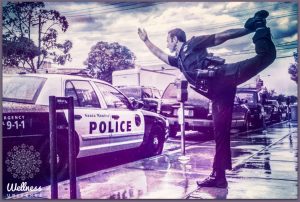 What does a typical YFFR yoga class look like?

According to GoodNet, Mead teaches trauma-sensitive yoga and resiliency training, which helps first responders to feel more prepared when they have to deal with the parts of their job that are more emotionally draining. She really focuses on employees who had witnessed trauma, helping them to deal with it in a healthy manner. 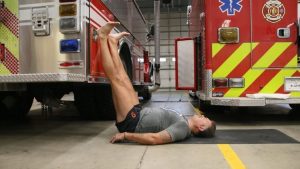 YFFR focuses on helping first responders to deal with trauma in a healthy way.
Image: Yoga for First Responders

What are the benefits to first responders?

Mead admits that it isn’t always easy to get these people on a yoga mat, but one approach always works – she tells them that practicing mindfulness, breathing exercises, and movement will improve their performance at work. Mead even has the science to back it up: “Breathwork helps CO2 tolerance in the body. It means that while a firefighter’s air bottle normally lasts 15 minutes in action, we can make it last longer. Yoga strengthens the body and makes it more mobile which is very important for first responders, as their body is their tool—but the true essence of yoga is neurological training.” 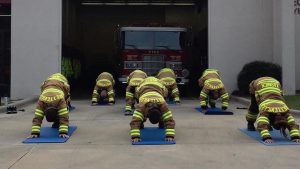 The easiest way to get skeptics on their mats is by telling them how much it will improve their performance at work.
Image: Yoga for First Responders

Skeptics seem to turn into believers pretty soon once Mead takes the lead. Firefighter and Paramedic, Richard Senneff, says that yoga has worked miracles for him in both his work and personal life.

“Fire and EMS by its very nature is a zero to sixty kind of work. You can be in the station polishing a diamond plate and suddenly you’re in a life and death incident. Hypervigilance is a very necessary state of awareness first responders carry with them at all times. It allows them to react quickly. You can’t go through hypervigilance 24/7, you need to be able to turn it off. Yoga gives you the tools, the ability to focus and concentrate, and shut off the hypervigilance if only for a while.” 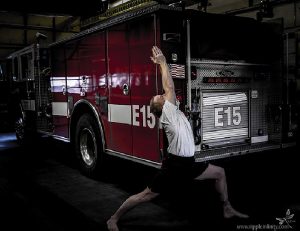 Those who take the classes can testify to the amazing benefits of yoga.
Image: Yoga for First Responders

Reaching people all over the world

YFFR has grown exponentially since it first started – it has trained over 300 instructors so far. All of them are fully equipped with the necessary skills to go out into communities and present yoga classes to first responders. YFFR has reached thousands of first responders all over the world – from the US to Canada and even Australia. 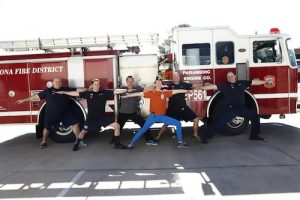 YFFR has over 300 instructors and counting.
Image: Yoga for First Responders

What Mead and her team are doing is super cool. Bringing the gift of yoga to those who need it most in their working lives is an amazing thing to do. We see this as more proof that yoga really can change and improve people’s life quality. All you have to do is roll out your mat and start flowing.