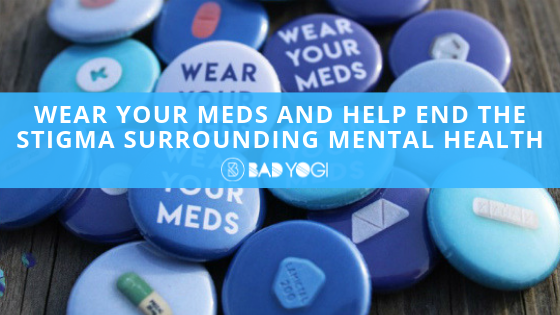 If you’ve been diagnosed with a mental illness or have suspected that you might have one but was too scared to get help, Lauren Weiss wants you to know that you are not alone and that the stigma surrounding mental health is bogus.

Weiss, who is a grad student at the Miami Ad School of New York, was reluctant to get help when she suspected that she might have bipolar disorder and she doesn’t want anyone to go through what she did. She was too afraid to ask for help and only went to therapy in 2015, a decade after initially experiencing the symptoms of bipolar disorder. Her reason for waiting so long? She felt like she would be seen as a failure once she was officially diagnosed and taking medication. She was also afraid of all the stories she’s heard of medication not working and only making your symptoms worse. Weiss was lucky enough to have been prescribed the right medication from the get-go. Not everyone is that lucky, but that’s the very reason Weiss started her campaign.

The Wear Your Meds campaign

Today reports that the campaign started off as an assignment for one of Weiss’ classes – she had to come up with a unique ad campaign. Her mind wandered back to mental health and how it is still very much a taboo topic. Many people who struggle with their mental health don’t openly discuss their struggle and their friends and family don’t know how to talk to them about it either. Weiss decided that she was going to address this by creating a campaign that encourages people with mental health disorders to “wear their meds” in order to start very necessary conversations.

Lauren Weiss is being an amazing advocate for mental health.
Image courtesy of Wear Your Meds

The Wear Your Meds campaign is simple – Weiss created buttons that feature 14 different psychiatric medications. She makes them all by hand with a borrowed button maker. The medications that are featured on the buttons are some of the most commonly prescribed, like Prozac, Xanax, Adderall, and lithium. Weiss hopes that people “wearing their meds” will be encouraged to talk to the people around them. Hearing about mental health from your friends or family members is different than hearing about it from an expert. Talking about mental health with friends and family already removes that pesky “taboo” element and it spreads awareness. In the end, this campaign might encourage those too afraid to ask for help to end up doing it because someone they know very well raised the topic.

Since the campaign’s launch, it’s picked up a lot of speed and has had a very positive impact. Weiss is very excited about it, saying: “I’m trying to reach who I was 10 years ago and hopefully get those people to get more help.” She added that if she had a little more exposure to people going through the same thing she was all those years ago, she would’ve gotten help sooner – especially if she could’ve talked to people who had struggled to find the right medication. It would’ve taken away a lot of the fear she was feeling.

Weiss makes the buttons herself.
Image courtesy of Wear Your Meds

Weiss’ campaign is not the first one aimed at removing the stigma surrounding psychiatric medication use. Last year, the hashtag “My Favorite Meds” was doing the rounds on Instagram. The hashtag encouraged people to post pictures of them holding their medication and explaining how it helps to normalize their lives.

Mental health experts are supporting it

Mental health experts are fully supporting these campaigns, saying that normalizing the use of psychiatric medication is vital. “Anything you can do to reduce the isolation and shame and the sense you are defective in some way (is positive), “says Dr. Ken Duckworth, who is the medical director of the National Alliance on Mental Illness (NAMI). He adds that even though medication only forms a part of mental health therapy, it’s necessary that the stigma surrounding these prescriptions are removed. Looking at people taking medication for conditions such as diabetes, we find that there’s no shame there and yet when it comes to mental health, it seems to make people uncomfortable. That’s why campaigns like Weiss’ are very important.

The stigma needs to end

Weiss realizes that not everyone can be equally open about their mental health and that the buttons cannot be worn everywhere, but she hopes that when they are being worn, they will start conversations and make a difference. Your mental health isn’t something you ever need to be ashamed of. It doesn’t make you less of a person. If anything, it shows that you are strong. It’s something you fight every day of your life, and that’s true bravery.

Weiss’ Wear Your Meds buttons sell for $3 each and she is donating all the proceeds to NAMI.