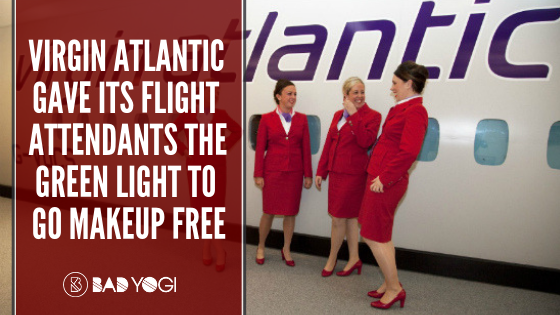 There’s no arguing that makeup is awesome. It can help to make your skin appear smoother, hide those pesky blemishes, and make you feel extra fabulous – but all of us feel like taking a break from it every once in a while, even at work. Virgin Atlantic seems to understand this and has made a bold move regarding the required appearance of its female flight attendants.

If you’ve ever been on a flight, you know that the flight attendants are the picture of put-together. A lot of us have probably envied their “perfection” when we got on a flight after a busy business trip looking sleepy and bleary-eyed with our hair standing in all directions. The truth is that flight attendants actually have to do a lot of prepping to look the way they do, especially if they’re a woman.

Virgin Atlantic is changing the rules

This is great news for female flight attendants working at Virgin Atlantic. The best part about the new rules must be the no-makeup rule. Yes, Virgin Atlantic has decided that its female flight attendants need no longer apply makeup before their shifts and that’s not all – they are no longer chained to the age-old (but still pretty classic) pencil skirt. Pants are officially part of Virgin Atlantic’s new female uniform. According to Today, a spokesperson for Virgin Atlantic said that the decision was made after listening to the views of their employees. We can hear the cheers of the ladies all the way from the airline. Pencil skirts may be a classic, but pants are way more comfortable while still looking stylish. 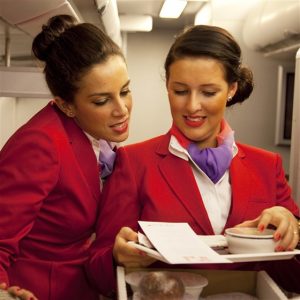 The rules used to be very strict

Before this new dress code was announced on Monday, female flight attendants were required to wear makeup and had to ask special permission to wear pants. Virgin Atlantic’s executive vice president of customer, Mark Anderson, said in a statement that the new dress code is more comfortable and also gives the team a choice of how they want to express themselves at work. The company added that they see this new dress code as a significant change in the airline industry, especially because it is an industry that still commonly dictates its crew’s presentation and requires female staff to spend a lot of time and unpaid labor on their appearance.

This truly is great news – it might set the stage for other airlines to do the same. It makes sense that flight attendants need to look professional and presentable, there’s no arguing that, but allowing female attendants to take it easier on the makeup and giving them the option to wear pants is really amazing. After all, everyone looks better when they’re feeling comfortable with what they’re wearing.