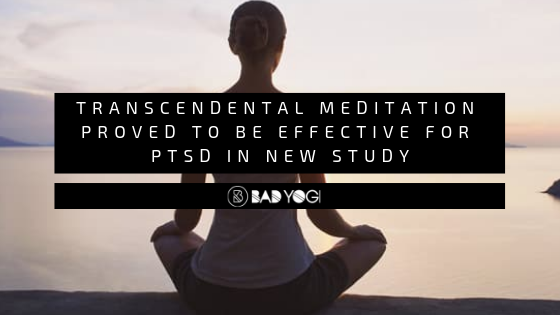 Transcendental Meditation Proven to be Effective for PTSD in New Study

If you’re a yogi, you’ve probably tried meditation somewhere along the line. If you’re someone who has made meditation a habit, you probably know that it is great for relieving stress and anxiety. Born in ancient India, meditation has become increasingly popular in the modern culture of today, and a recent study showed that it can even help with the treatment of Post-Traumatic Stress Disorder.

After 15 days of practicing TM, students’ PTSD symptoms dropped with more than 10 points. They were re-tested after 60 days and again after 105 days of their TM practice. When they reached the 105-day mark, the average group score showed that the students were below the PTSD threshold of 34. 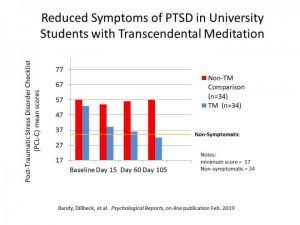 College students diagnosed with PTSD at Maharishi Institute (MI) and University of Johannesburg (UJ) were tested at 15, 60 and 105 days. After 3.5 months, the MI group practicing Transcendental Meditation (TM) went below clinical thresholds, while controls at UJ showed no change.
Graph: Maharishi University of Management

This seems pretty amazing. Using meditation as a form of treatment instead of the usual exposure therapy seems a lot less intimidating and a lot easier. But what exactly is Transcendental Meditation and what are the benefits? Let’s break it down.

What is Transcendental Meditation?

In an article published by the Independent last year, Transcendental Meditation is explained as a form of silent meditation that, like all other forms of meditation, originated from India. Being dubbed as a “silent meditation” means that this specific type of meditation does not require movement or chanting. It simply requires practitioners to choose a mantra, silently think of it, and nothing else. No contemplation or concentration required. Yes, it’s pretty simple. Because this meditation only requires you to be still and focus, it allows you to enter a psychophysiological state of alertness. It is this state of alertness that experts claim can help with the treatment of not only PTSD, but also other related health issues, like anxiety, insomnia,  and depression.

Transcendental Meditation has been making the rounds before the Maharishi Institute proved its effectiveness – celebrities like Ellen Degeneres, Michael J Fox, and Mia Farrow are all huge fans of it and looking at all the benefits, it seems like something worth trying.

Last year, Reuters reported that another similar study done on veterans proved to be pretty successful, with 61 percent of veterans experiencing relief from PTSD after three months of treatment. Only 42 percent of veterans who were treated with exposure therapy showed a reduction in PTSD symptoms. Sanford Nidich, the lead study author of the Maharishi University of Management Research Institute in Fairfield, Iowa said that Transcendental Meditation can be considered a good alternative option for patients who don’t respond to exposure therapy or who want to avoid trauma-focused treatment.

Transcendental Meditation is a good alternative to exposure therapy

Even though treatment through Transcendental Meditation doesn’t have a 100 percent success rate, the numbers don’t look half bad. Even though exposure therapy certainly has its perks, like instilling confidence and a sense of mastery in patients, Transcendental Meditation provides a much less aggressive approach to PTSD. There may be a lot of people who will find meditation more effective than exposure therapy and because it’s so versatile, many others who suffer from mental illness can benefit from it as well.

Psychiatry Online reported that Nidich said the goal of the study was not to prove that one form of treatment is superior to the other, but rather to examine whether these two treatment options are on equal footing, so patients can choose what kind of treatment they would like to receive. He added that using Transcendental Meditation and exposure therapy together might even yield more amazing results, but that theory is yet to be tested.

The great thing about Transcendental Meditation seems to be its wide range of benefits. We all experience stress on a daily basis – some of us suffer from anxiety and even depression, so finding something that will help deal with it that doesn’t include seeing a therapist kind of sounds like a win. Not only will you save money, but you will also likely start to build a habit that might last a lifetime.

If you suffer from depression or if you’ve been looking for a way to feel calmer and beat stress and anxiety, giving Transcendental Meditation a try can’t hurt. You’ve got nothing to lose and everything to gain.