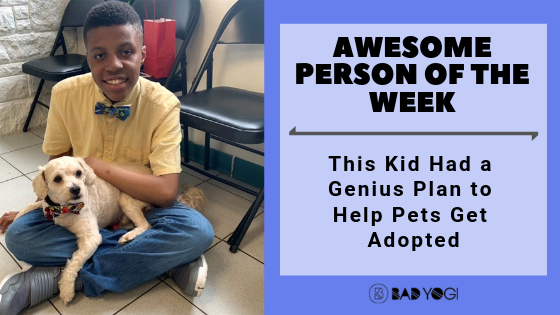 Awesome Person of the Week: This Kid Had a Genius Plan to Help Pets Get Adopted

We all love our pets, and it’s heartbreaking that there are so many out there without a home. One boy wanted to change this, deciding that he would find a way to make pets at shelters more desirable for adoption.

Darius Brown from Newark, New Jersey, is no ordinary 12-year-old boy. He’s had to overcome a lot of obstacles in life. According to Today, he was diagnosed with developmental delays when he was 2 – this included speech, comprehension, and fine motor skills delay. Ever since his diagnosis, his mother and sister have worked tirelessly to aid in his development.

Brown’s big breakthrough finally came when he was 8 and his sister, Dazhai Brown-Shearz, 22, was working on a project for cosmetology school, which included making ribbons for little girls. Because of Brown’s delayed fine motor skills, he struggled to work with his hands –  he even struggled to tie his shoelaces, but his mom and sister were still doing everything they could to help him, and they came up with a brilliant idea. “My mother and I came up with the idea that if he helped us with things like prepping the ribbon or cutting it, and sewing fabric together, it would help him. And it did — it worked!” Brown-Shearz says.

Once Brown got the hang of it, he started making loads of bowties and wore them on a daily basis. It became a fashion staple pretty soon, with many people asking him where they could buy it. This was when Brown realized he could use the bow ties to help homeless pets find a home. This led to him starting the company Beaux & Paws, which makes bow ties for pets and their owners. He donates the bow ties to rescue organizations all across the country. “It helps the dog look noticeable, very attractive. It helps them find a forever, loving home … I love everything about dogs and cats,” Brown says.

I had the most amazing time visiting @streettails in Philadelphia today. The staff is amazingly friendly and the dogs and cats are well taken care of. They have some loving, energetic, and playful dogs just waiting for a loving forever home. Old Glory (white pup) is very calm and lovable, Hedgehog (Brown dog) is just as loving and so cute and adorable, and Tarmac (black pup) is very playful and affectionate. If you live in the area and would like to adopt a dog or know someone who’s looking to adopt please consider visiting: Street Tails Animal Rescue 1030 N. 2nd Street Unit 401 Philadelphia, PA 19123 . . . . . #pawsomemission #streettails #streettailsanimalrescue #animalrescue #dogs #cats #dog rescue#catrescue bowtie #pawitforward #oldglorystreettails #tarmacstreettails #hedgehogstreettails #doggybowties #bowtiessavelives #dapperdog #divadog #philadelphia #pa #godswork #onamission #savethedogs #savethecats #adoptdontshop #ilovedogs #mansbestfriend #beauxandpaws #sirdariusbrown

Doing something amazing for animals

Beaux & Paws really kicked off after hurricanes Harvey and Irma left many dogs and cats displaced and without a home. Brown started to donate the bowties he made to the American Society for the Prevention of Cruelty to Animals. When he heard that the shelters at which these animals were housed would have to euthanize them if they weren’t adopted, he just knew had to do something to help. It was the start of great things – he’s donated hundreds of bowties to shelters across the country and is currently raising funds to donate more. 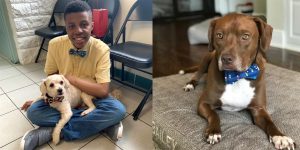 Darius Brown started to make bowties for pets at shelters so they’ll look even cuter for potential adopters.
Image: Courtesy of Darius Brown

This is just the beginning…

Initially, all the money for the fabric needed to make the bowties came from Brown’s mother’s pocket, but now that Beaux & Paws have really kicked off, there have been people who started to donate fabric. People can also buy bow ties from Beaux & Paws – a portion of every sale goes to the ASPCA.

First stop of my #PAW-some Mission is here in my hometown at the Associated Humane Society. These three are so fun and playful and they have a lot of energy. I enjoyed the time I spent with them. I even got a chance to name one of them, “Parker”. He had on the Marvel bow tie. Parker and I formed a bond. He sat in my lap and wanted me to rub him. He did not want me to leave. He whimpered as I walked away. It broke my heart. I did not want to leave him either. Parker and his friends needs a loving home. If you or someone you know would like to adopt any one of the dogs pictured here, you can email me at beauxandpaws@gmail.com or contact the Associated Humane Society at:973.824.7080.@ahsnewark #sirdariusbrown #beauxandpaws #adoptdontshop #adoptapet #savealife #saveapet #newark #nj #doglover #bow tie #ilovedogs #dogs #humanesociety #rescuedogs #rescuedogsofinstagram #rescuedogsrule #shelterdogsrock #bekind #giveback #dapperdogs #divadogs

Currently, Brown is raising more funds to increase his current bowtie production. Should he raise enough funds, he will be traveling to at least five different states this summer to visit different shelters and personally donate some bowties and help with adoption events.

Brown’s work has gained some recognition from a lot of people, even former President Barack Obama. Obama sent him a personal letter to praise him for his awesome work. Brown was pretty overwhelmed when he received the letter, and was obviously very honored and proud.

I have never been so excited and shocked and speechless in my life. Today have to be one of the greatest days of my life. What an honor! I can not believe I received a letter of recognition from PRESIDENT BARACK OBAMA!!!!!!! @barackobama Thank you so much. I'm truly honored. You are my idol! #presidentbarackobama #barackobama #recognition #honored #myidol #greatestdayofmylife #believeinyourself #helpothers #giveback #community #destinedforgreatness #godisgood #blessedandhighlyfavored #thankful #imjustgettingstarted #bowties #designer #dogsofinstagram #dogs #adoptdontshop #bowtiessaveslives #fisll #mybrotherskeeper #newark #newjersey #youth #thabitiboone @michelleobama #ellentube #love #presidentobamaapproved @theellenshow @ellentube @oprah @nbclittlebigshots @tylerperry @kellyclarksonshow @iamsteveharveytv

His family is very proud of him

Brown’s mother, of course, is incredibly proud of him and all he’s overcome to get to where he is today. “We’re definitely very proud of Darius. He’s overcome a lot and he’s still on his journey of overcoming a lot of things. He just keeps going for what he believes in,” she told Today.

Brown gives his family all the credit

Brown, in turn, is very grateful for his family – he knows how much effort they’ve put in to help him develop his skills and his business.

“Mom is very supportive and she always sacrifices for me. And my sister, she sacrificed two years of her college so that she could help my mother because my mother is a single mother and my sister knew it was going to be hard for her. I just owe everything to my sister and my mom.”

It’s great to see a kid who people initially thought would struggle all his life amount to something great. Brown has proven that any obstacle can be overcome with the help of family and friends, and of course, willpower, which he seems to have a lot of.

Brown can really serve as an inspiration to all of us to do more with what we have. He had more challenges to face than most, and he overcame them all and created something amazing and beautiful.