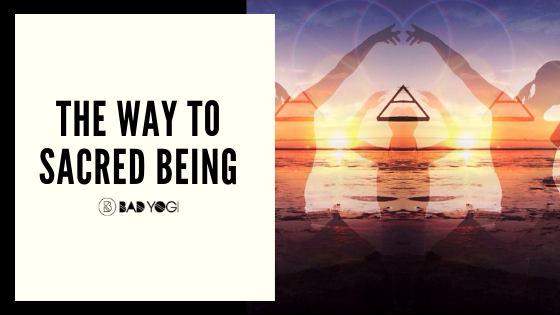 The Way to Sacred Being

Yogis speak of the third eye, or head’s crown, as a way to access higher levels of consciousness. This access has allowed some yogis to achieve physical feats that have been – through the centuries – the envy of India’s jadoowallahs, jins, and magicians.

To access and demonstrate supernatural ability is neither a goal of yoga, nor are these mystical states provable by qualitative measures; but they are understood by those who experience mindful yoga as a way to wholeness and remaking of body and mind.

We draw upon metaphor when describing the unseen and unexplainable because we cannot imagine something without an image. It’s easy to imagine brokenness as part of the move to wholeness when reading the poet Rumi. “You are an empty wine glass, I am granite. You know what happens when we touch.”

The seedbed from which yoga arose states that this union of opposites is part and parcel of God within (the atman) and matched by the same divine or cosmic essence known as Brahman.

This is like a meeting of wine and granite as the highest self in human form and divine self in cosmic form are soldered together in prakriti and purusa. The resulting sacred being is already perfectly whole; it is not a broken glass.

This proclamation for the yogi, based on his/her existing situation, means one is at union with God now, in the present tense. God is in us now. This is not the same as the ridiculous claims made today that we are goddesses or gods. We are not, and it is hubris to claim so. But it does mean that God is within.This may look like splitting hairs, but its not the same thing.

Spiritual perspectives require the task of mental discrimination. There is a clear distinction between pantheism and pan-en-theism. Pantheism states god is all and elevates everything to  god or goddess. Pan-en-theism means God in the essence that pervades and interpenetratets every part of the universe and all beings. This is how the divine essence is in the yogi – but it is in him or her rather than being him or her.

To say the god or goddess is in me, just as it is in you and everyone else, raises the playing field to a level of divine respect for all things because God is in all things. This is the truth-force or satyagraha that drove Ghandi’s nonviolence and is a powerful statement of an inclusive identity and radically respectful ethic. In this ethic, there is no room for nationalism or racism because God is in everyone.

In Anam cara: A book of Celtic wisdom,John ODonohue wrote, “The eternal world and the mortal world are not parallel, rather they are fused. The beaufiful Gaelic phrase, fighte fuaighte,woven into and through each other, captures this.”

On an essential basis, God is in us but that does not make us gods or goddesses. An obvious extention to this is that nobody needs to do yoga to be whole because we already are. Several times in a class I attended, New Zealand yoga teacher and author Mark Whitwell said, “we are already perfect the way we are right now, so stop looking and start living. Each of us came into being because of a union between man and woman, “a union that brings together one hundred percent complementary yet equal opposites.” He continued, “our longing to experience connection is really the grace we’ve been given.”

What then do we do with stress and brokenness. How do we continue in the midst of failure and loss. Where do we put our longing and wishing for things to be different? These are the wrong questions to ask and evidence of a flawed perspective. It’s okay to admit this is how we sometimes think because our culture tends to seek an answer from outside or from an authority; however, the truth is that experts and authorities have the same longing and persistent nagging questions over truth and existence in the middle of brokenness. The slings and arrows of outrageous misfortune sting all of us.

Yoga answers by saying that grace already exists within as the union we have with divine essence. To know this is to take one step toward a higher consciousness that delights not in egoistic superiority but in healing and service. Like all conscious awareness it starts with self.

And so perhaps longing is even the motivating connector for union and higher consciousness that brings us to yoga. We sense in our practice that something is happening beyond stretching and breathing. In class, we follow instructions and move deeper into our longing which brings us home to grace.

The roots of avidya (faulty perception) are deep in humans and the branches are well developed and far reaching, but tuning the self by the practice of mindful yoga diminishes the effects of avidya. Yoga, and consciousness built through meditation, breath-work, and observances are gifts of self to self.

We do yoga for ourselves first, and then maybe we are better prepared for the requirements of our lives. Perhaps our yoga as the way to unified self will even teach us to serve others. Then, in the midst of our service, the way to sacred being becomes our way.