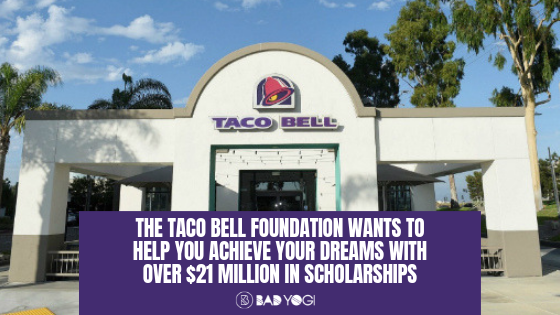 When you’re a student wanting to apply for college or university, but don’t have the necessary funds, the phrase “the struggle is real” becomes a hard reality. Luckily, Taco Bell has decided to lend a helping hand – and they’re not even going to look at your SATs or GPA.

In the 21st century, we’re well aware of the fact that a degree opens more doors than a high school diploma – in fact, the Georgetown Center on Education and the Workforce has found that by 2020, 65 percent of all jobs in the American economy will require education beyond a high school diploma.

How do I apply?

If you’re about to finish high school, or a high school graduate between the age of 16 and 24 looking for a scholarship, the Taco Bell Foundation might just be your salvation. CNBC reported that the foundation will be donating college scholarships worth more than $21 million by 2021. Students who want to apply need only submit a two-minute video in which they describe their passion – no essays, grades, or test scores are required. You will be chosen solely according to the video you submit.

How much are the scholarships worth?

This initiative is not entirely new

There is no denying that this is a wonderful initiative, and it’s not entirely new either. The Taco Bell Foundation has offered the Live Más Scholarship for four years now and they’ve grown it since. When it started, the organization donated only $10 million but recently decided to double the amount.  It is good to see businesses starting to take this initiative instead of sticking to the common marketing techniques of offering customers free vacations or making use of celebrity endorsements.

The reason the foundation does not look at your grades

The initiative of not considering applicants’ grades or SAT scores to select eligible candidates sets the Taco Bell Foundation apart from many similar initiatives. Executive Director of the Taco Bell Foundation, Tina Nguyen, said in a statement that the foundation made the decision to focus on passion, rather than grades. They recognized the need to present opportunities to students who might not fit the status quo. Rather, they turned their focus to students who are creative and hard-working innovators, especially because most of the scholarships made available for further studies focus more on students’ traditional academic and athletic tracks.

Everyone deserves a chance to chase their dreams

It truly is a great initiative, because as many people have proved before, your grades at school don’t define you or the rest of your life. Even some researchers have posed the question of whether a student’s grades at school is a true reflection of his or her abilities or whether it is simply a reflection of their financial well-being. Students who don’t struggle financially can afford extra classes for subjects they struggle with, they can participate in various sports because buying the clothes and equipment needed is not an issue. Students who don’t have the necessary resources will most likely disappear among those who do, and sometimes they are the ones who need a second chance more than anyone else.

Are you one of those students who need someone to give you a shot at your dreams? Then get out your camera and start making that video. Applications close on February 21 and the winners will be announced this coming Spring. Go on – make those dreams a reality.