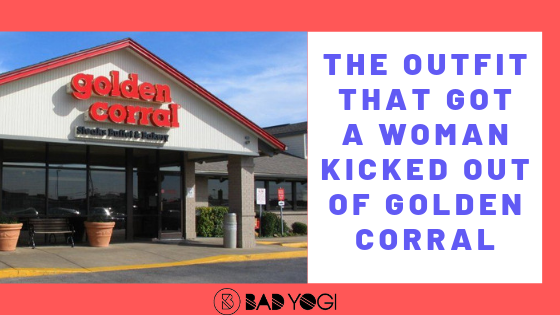 The Outfit That Got a Woman Kicked Out of Golden Corral

In the past few years, women have really started to pave a way for themselves in society – not just when it comes to being treated equal to men, but also when it comes to how their bodies are perceived. They are making conscious efforts to love their bodies just the way it is, but it’s not always an easy task, especially not when other people keep breaking them down.

Plucking up the courage to wear a crop top

Sueretta Emke, 25, had an awful experience at a restaurant after deciding to wear a crop top for the day. According to NBC News, she, her husband Andrew, and their young son Aiden drove an hour to the Golden Corral restaurant in Erie, Pennsylvania, to have lunch as a family.

Emke had recently bought herself a crop top and even though she really liked it, she wasn’t entirely sure whether she’d actually wear it when going out. Wearing a size 16, she deemed herself “too big” to wear it in public. It was her husband who convinced her to put it on because he thought she looked really cute in it. With his encouragement, she opted for the crop top and a pair of denim shorts and felt really good in it. Unfortunately, her confidence in herself and her outfit was shattered a few hours later.

Cover up or leave

Shortly after arriving at the restaurant, Emke was approached by the manager and told that she had to go get dressed in something else because a customer complained that she was dressed “too provocatively”. Emke, who was feeling terribly embarrassed, told him that she and her family had come a long way and that she didn’t have any other clothes with her. She went on to ask the manager what exactly was wrong with her outfit, but he replied that it wasn’t his place to say. She then asked him whether the restaurant had a dress code and he claimed that it did, but according to Today, a spokesperson for Golden Coral had revealed that it does not. Having nothing else to put on, Emke and her family were forced to leave the restaurant. The manager reluctantly refunded Emke for her meal, but the same was not done for her husband and child. 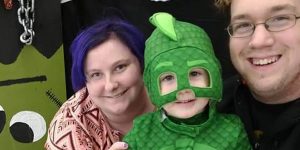 Emke and her family drove an hour to treat themselves at Golden Corral.
Image courtesy of Sueretta Emke

Not being “sexy enough”

After getting over the initial shock, Emke realized that she’d probably been discriminated against because of her size – because she’s not thin, she’s not considered sexy enough to wear a crop top. She recalled that she’d seen many people wearing way less than her eating at the restaurant before, and none of them were kicked out because of their clothes. She later complained to the restaurant’s franchise owner, but he defended the manager’s decision. 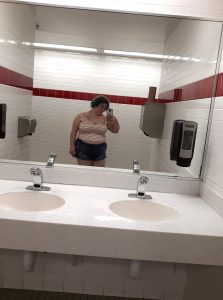 Emke got kicked out of Golden Corral for barely showing any cleavage and a small bit of her stomach.
Image: Sueretta Emke Facebook

Receiving an outpour of support

Afterward, Emke consulted with her lawyer to find out what her legal options were, and he encouraged her to share her experience on social media. She did, and the post has gone viral since. The messages she received were overwhelmingly positive and some even pointed out that the Golden Corral in question is right next to a splash lagoon, so it would make sense for people to come and dine in crop tops or even swimwear. One woman confirmed this, saying, “I’ve eaten there in a bikini and see-through cover-up and no one has ever said anything.”

If it’s not kind, shut the hell up

In her Facebook post, Emke said that she doesn’t deny people their right of opinion, but that they should think about how it will affect other people before voicing it: “People are going to have their own opinions and they’re entitled to their opinions, but you’re not entitled to share your opinions to hurt someone else. And what upset me the most is that another customer’s experience was more important than my family’s experience.” 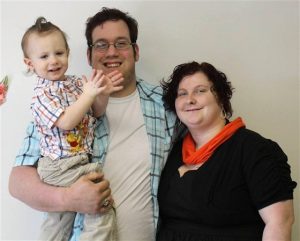 Emke with her husband, Andrew, and son, Aiden, 3.
Image courtesy of Sueretta Emke

According to Emke, the worst part of the whole experience was the fact that it was the first time she’d ever plucked up the courage to wear a crop top, and that she actually managed to feel good in it, only to be discriminated against later because of it. “I really felt cute in it and now I never want to wear that shirt again, even though it was the first time I ever wore it and I felt good about myself in it,” she said.

Golden Corral’s spokesperson told NBC News that they would like to make it up to Emke: “We are grateful the issue was brought to our attention because it represents an education opportunity and a chance to make amends with a guest we disappointed.” The company’s district manager sent Emke a letter of apology and gift cards to make up for her disappointing experience, promising that the company will look into the matter and take the necessary corrective action.

Emke accepted the apology and says that she believes the district manager will try to make the necessary changes at the restaurant in question, adding that her main goal is to make sure that this kind of thing doesn’t ever happen to anyone else.

Your body, your choice

Since receiving so much positive feedback on Facebook, Emke is considering wearing that crop top again, and we totally think she should. To hell with anyone who thinks she’s not “skinny enough” to enjoy her body and show it off in the same way other women do. Only being allowed to dress a specific way when you look a certain way is utter nonsense – and those who still think otherwise really need to take a look in the mirror and ask themselves what makes them so special that they can pass judgment on other people’s bodies and their choice of clothing.