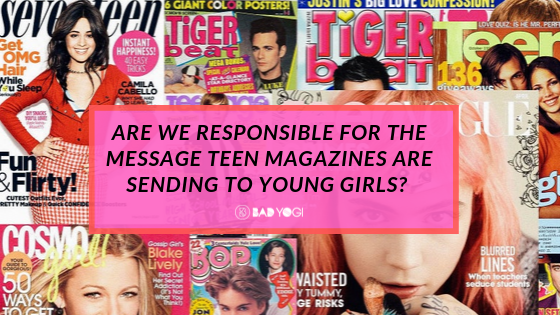 Are We Responsible for the Message Teen Magazines are Sending to Young Girls?

Back in 2016, Girls’ Life magazine came under fire for its choice of cover stars as well as the topics it covered. Critics said that the magazine isn’t exactly empowering young girls by only focusing on looks, relationships, and fashion. This is an interesting topic, because Girls’ Life isn’t the only publication that was guilty of this at the time. So, has anything changed since the backlash against that cover or is it a case of same old, same old?

A problem with the portrayal of girls

In case you’re not familiar with this story, the cover of the August/September 2016 issue of Girls’ Life became famous for all the wrong reasons. Women You Should Know did an article about it and compared it to its counterpart, Boys’ Life. The latter had big bold words across the cover stating “Explore Your Future” while the former had headlines like “Fall Fashion You’ll Fall in Love With” and “Wake Up Pretty”. 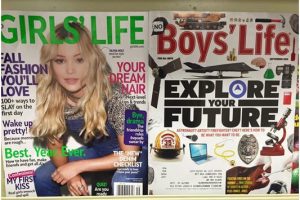 Critics compared the message Girls’ Life sent to their readers with that of Boys’ Life’s main message.

The argument here was that while boys are encouraged to learn and explore what the future holds for them, girls’ main goal should be to wake up pretty. It was seen as a sign that gender stereotyping is alive and well. Critics argued that these magazines insinuate that girls’ lives aren’t as serious as boys’, and a lot of people seemed to have agreed at the time.

This is nothing new, and it would be safe to say that not much has changed since. At least, not as much as we would have liked. The same outlet later published another article about that same cover. This time around, graphic designer Katherine Young, who was disgusted by the message it sent, went ahead and changed the cover star, and every other subheading that was featured. 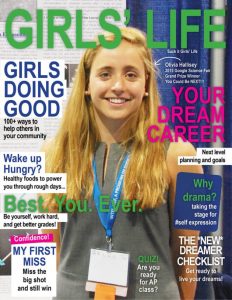 The result was stunning – Young turned the cover into an empowering one; one that encourages girls to learn and focus on something else than just pretty clothes and silly romantic relationships. Headlines like “Wake Up Pretty” were replaced by “Wake Up Hungry? Healthy foods to power you through rough days”. “Best. Year. Ever.” was replaced by “Best. You. Ever.” “Your Dream Hair” was replaced by “Your Dream Career”. The list goes on and on. Young also replaced the celebrity cover girl with Olivia Hallisey, who was the 2015 Google Science Fair Grand Prize winner. Wouldn’t you agree that that’s the kind of material girls’ magazines should be putting on their covers?

Young said that she changed the cover to make others more aware of the messages they are sending to young girls: “We can do better. I hope this cover inspires us all to do better every day and be more conscious of the imagery our children are bombarded with. I hope this sparks conversation with both girls and boys. They all need to know that girls are more than a pretty face.” 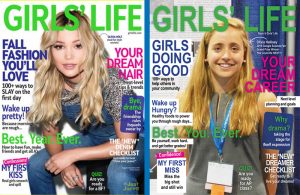 We wholeheartedly agree, but while the cover did go viral, did it inspire any change? Looking at this year’s August/September issue of Girls’ Life,  it doesn’t seem so. I can appreciate the fact that actress Anna Cathcart is at least looking like a 16-year-old instead of a grown woman, but the headlines on the cover remain the same. The only one that got me excited was “16 Secrets to Major Confidence”, but that’s because it’s one of the only headlines that have nothing to do with beauty and fashion or being cool. Yeah, nothing’s changed, folks. 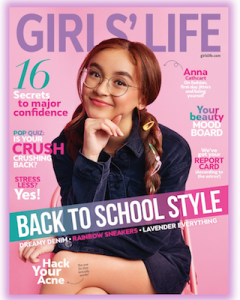 Not much seems to have changed. The August/September 2019 issue of “Girls’ Life”
Image: Girls’ Life

Why is Girls’ Life still around despite the lack of change?

Girls’ Life isn’t the only magazine that’s guilty of sending these kinds of messages – there were other publications out there that used to send the exact same message, like Seventeen, Discovery Girl, and Teen Vogue, to name only a few. The only difference between these publications and Girls’ Life is that they are no longer in publication. Why? Was it because girls were getting sick and tired of being told to be pretty and fashionable after all? Referring back to the comparison between the Boys’ Life and Girls’ Life cover, I’d like to beg the question – why can’t girls wake up pretty and focus on their future at the same time? Why does it have to be the one or the other? It’s ridiculous.

Girls’ Life must be doing something right, though. It’s one of the few teen magazines that are still going strong, despite the fact that it sends the same messages as the aforementioned publications. So, what’s their secret?

What does the editor say?

The editor of Girls’ Life, Karen Bokram, told Bad Yogi Magazine that the mocked-up cover Young created represents what girls’ parents want, not what teenage girls want. She also pointed out that media experts said that Young’s cover won’t sell. She added that intead of pleasing parents only, the magazine strives for diversity: “What we strive for is a middle ground, a healthy blend of these two. I suppose it’s up to everyone out there on the internet to decide how we’ve done.”

Bokram makes a good point here. On the magazine’s choice of cover stars, she said that they have very specific criteria. “Our covers have always featured strong, smart girls who are pursuing their passion/going after their dreams—and making a positive impact along the way.” She added that once you look inside, you will indeed find quite a bit about fashion and beauty, but you will also find articles that cover topics like school, wellness, self-care, and friendships. The magazine also features some hands-on articles like how to switch up your bedroom to reflect your personal style.

Are we the reason for Girls’ Life‘s success?

The fact that Girls’ Life does indeed focus on more than just beauty and looks once you open the cover may very well be the reason they’re still around. I’m not saying that its counterparts didn’t do the same thing (I actually recall Seventeen featuring similar articles), but Girls’ Life‘s continued success may be due to the fact that Bokram and her team didn’t try to change their magazine to please parents. In fact, Bokram says that she’s still proud of that 2016 cover to this day.

“Three years later, I am still 100% proud of that issue (and of course there were several features didn’t make the cover like our discussion of girls sports/concussion protocol, a first-person essay by a teen burn survivor on how she found strength in her scars and a special report on how early school schedules affect academic performance—and what girls can do about it).”

I have to add here that it is a pity that some of those headlines didn’t make the cover – that’s the reason I’m writing this article after all. Shouldn’t parents teach their kids to be more interested in those kinds of topics? Are we the reason that these headlines are still making the cover? Kids only know what we teach them, and if they were at all interested in anything more than fashion and looks, they would perhaps never have asked their parents to buy the magazine in the first place. I remember my younger sister asking for National Geographic‘s kids’ magazine when she was in her teens. She had no interest in fashion and looks, thus magazines like Seventeen never appealed to her because she couldn’t identify one headline on the cover that interested her.

Girls and their various interests

Bokram added that one thing the magazine hasn’t changed at all in the past three years is its goal to embrace girls and their various interests, whether that be “singing, soccer, skincare, STEM or finding the perfect fall sweater.” She added that “shaming” girls for being varied creatures is very 2016.

I can agree that girls are varied creatures, which means that we could indeed encourage them to be interested in more than just beauty and fashion. Perhaps what Young was trying to show us is that girls could be exposed to so much more than just beauty and fashion, and that magazines should encourage this – not just inside its glossy pages, but also on its front cover. But then again, it’s not just the magazine’s responsibility to do this – parents need to introduce their girls to more than just fashion and looks. Once the market changes, so will the magazines that cover for them.

Are we responsible for these kinds of messages?

Magazines are just trying to please their audience

Magazines create content their readers want. Maybe the problem isn’t just with these teen magazines, perhaps we are a big part of the problem. As long as we still buy it despite the message it sends, we’re accomplices. Perhaps we should look at ourselves first before we point the finger to magazines that are only trying to sell copies by giving its customers what they want.

It’s up to every parent out there to teach their kids who they can be and encourage them to explore more than what is typical for their gender. We shouldn’t be blaming magazines for the messages they are sending when we are, in fact, partially responsible for it. We need to change what we teach to our kids, and only then can we start to point the finger to magazines that we think are sending the “wrong” message.

Over to you: What do you think about the message these magazines are sending to teen girls? Is it our fault that nothing has changed since 2016? Drop your thoughts in the comments.