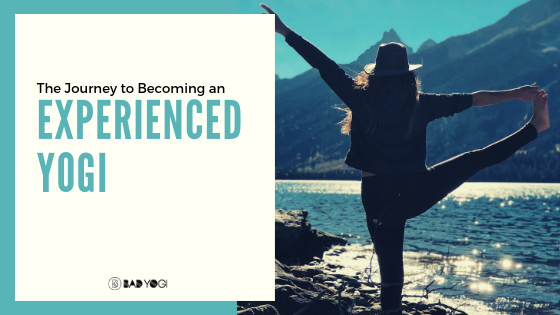 The Journey to Becoming an “Experienced Yogi”

What kind of yogi are you?:

My cursor hovered in between the responses

I was joining a new yoga gym and filling out the online profile while eating a muffin and getting crumbs all over my keyboard.

I considered the options.

I’m a mother of three in my late 30s and have been practicing yoga off and on since I was 18.

Back then it was the early 2000s, and yoga was starting to appear in mainstream gyms with some regularity. I was a member at 24 Hour Fitness. I was young and precious and, honestly, afraid of all the weight-bearing machines. So I jumped right into the group yoga class. For the first year, I raised my hand each time the instructor would ask if there were any new students.

I continued yoga sporadically in my early 20s. Then I got married, got pregnant, and I canceled my gym membership. The only yoga I did was with a maternity DVD I bought at Target.

Judy looked massive and due any day, the elastic on her pants, barely holding on.

Ronda didn’t look pregnant at all, and Fawn was somewhere in the middle.

I went on to have another child, so I dusted off that old DVD and was nostalgically reunited with Judy and Ronda and Fawn, ‘Sup, girls?

I remember working out with them and their 90s haircuts so much that I suddenly I didn’t need them anymore.

“I got this, Fawn!” I thought to myself. “I can’t watch you under the studio lights with your bangs whisping all willy-nilly in the air conditioning anymore. I can pregnant cat/cow all on my own!”

During my second labor, things were more accessible to me. I used all the techniques I was taught in yoga to center my breathing and focus inward. After my second baby was born, I bounced back quickly. I felt fantastic and realized I needed more yoga in my life.

Being a young mom of two, I had very little time but loads of stress and anxiety. I committed to at least one hour of yoga weekly.

That’s when I found Debbi. Debbi ran a yoga class out of my neighborhood community room. It was every Wednesday night, 10 dollars. That’s it: no fancy gym, no mirrors, no ego. Just bring your mat and chill. I needed Debbi’s chill so bad.

At most, there were four people in the class.

Debbi gave me the confidence to push myself and try new poses in a safe space. She also taught me to do a headstand, which I remember practicing in our living room, only to have my baby crawl up to me, pull out my boob and start nursing, all while I was upside down!

When I became pregnant with my third, I kept going to Debbi’s yoga classes. This time, I knew enough to modify poses, and I didn’t need Ronda, Judy, and Fawn anymore. I’m sad to say; that DVD got tossed in the Goodwill pile — godspeed ladies.

My third delivery was different than the other two. It was an emergency; Code Blue. I was put under general anesthesia and didn’t even know if my baby was going to survive when I woke up. I was horrified and fearful and so scared. After the surgery and delivery, I woke up to the nurses telling me my baby was alive and doing well. They also asked me if I was a long-distance runner.

“WHATT?” was my actual response. Looking back, it was probably pretty amusing to the nurses asking me this question. I was waking up from an emergency C-section, my son and I had just gone through a near-death experience, I looked and felt like I’d been run over by a bus full of rabid honey badgers, and you’re asking me if I run marathons? WTF lady? But the reason, she told me, was because I was able to maintain such a low and steady heart rate throughout the entire surgery.

She smiled and said, “Ah. That makes sense.”

Exactly six weeks after that traumatic birth, I took my first ever hot yoga class.

And that’s when things started getting real good for me. I don’t know if it was because I wasn’t going to have any more babies, and I finally got to have my body back or what, but hot yoga became my jam.

The sweat, the surrender, the detox, all of it felt so right.

I remember so many nights after I took a hot yoga class, I’d drive home all sweaty. I’d feel freedom and peace and that electric hum of energy, despite my yoga pants being extremely damp in all the places.

Yoga continues to teach me gratitude, love, and acceptance of my body, and all that it has accomplished. I didn’t realize it before, but yoga has always been there for me. It has held me through all my births, recoveries, all my joys, and all of the ugly cries.

Yoga has been quietly ticking away in the background of my life, reminding me to fill my lungs up with positive intention and exhale all the negative self-talk that gets stuck in my mind. Yoga has been my superpower, arming me to overcome the difficult, and make sense of the uncomfortable parts of life.

I considered all of this as I finished my muffin. I wiped a few crumbs off my computer, and then after a deep exhale, I selected EXPERIENCED YOGI.

I’m Beckey!  I just finished up a year of full-time travel with my husband and three kids, I practice yoga on a mat that I bought at Costco, and I love finding shapes in the clouds.