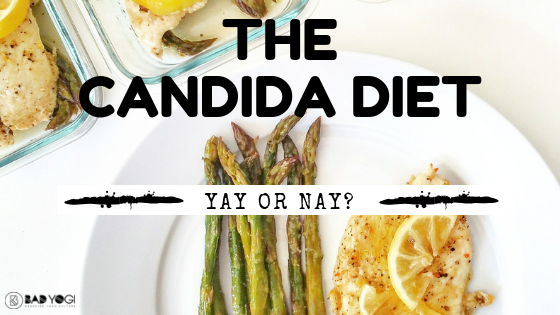 The Candida Diet: Yay or Nay?

If you’ve never heard of the candida diet before, you’re not alone. There’s always a new diet out there that is supposed to help you lose weight or aid you with health issues. According to the creators of the candida diet, it can help cure irritable bowel syndrome, yeast infections, and much more.

A lot of us roll our eyes when a new cures-it-all diet pops up on the internet, but looking at the diet and its benefits can’t do any harm. You might even pick up a few tips to improve your own eating habits along the way. So, let’s dig right in.

Now that you’ve heard the name, you might be wondering what exactly candida is. BBC Good Foods spoke to nutritionist Kerry Torrens, and she explained that candida is a yeast-like fungus that grows in our bodies. It is found in the mouth, the gut, and the genitals. For most people, this fungus doesn’t cause any problems, but being an opportunistic pathogen, it will attack when your immune system’s defenses are low or if you happen to have a pre-existing health condition. Candida overgrowth can cause a series of ailments, which includes but are not limited to, oral thrush, fatigue, skin infections, UTI’s, yeast infections, and digestive issues like irritable bowel syndrome (IBS), and Chron’s disease.

How does the candida diet work?

Speaking to Women’s Health, self-proclaimed candida sufferer and health researcher Lisa Richards, who is also the mastermind behind the candida diet, claimed that there are three elements that are required to treat candida overgrowth in the body: antifungals, probiotics, and diet.

According to Health Line, the diet is designed to encourage the intake of foods low in sugar, like non-starchy vegetables and gluten-free foods. It excludes sugar, alcohol, caffeine, gluten, and certain dairy products, which are believed to encourage candida growth in the body. In short: it is a highly restrictive diet. Since it is mainly an anti-inflammatory and nutrient-rich diet, it could provide those who follow it with more health benefits than just reducing candida overgrowth. The downside is that this diet has not been properly researched yet, which means that it may not work for everyone.

What do the experts say?

Knowing all this, what do the experts have to say about the diet? Dietician Faith Toogood is skeptical, saying that because no extensive research has been done on the diet, there are no specific dietary guidelines to follow for the particular ailment candida overgrowth is causing you. She added that the most important thing for her as a dietician is to not rely on a diet to cure something. She used thrush as an example, saying that there is no evidence that consuming too much sugar can cause it, so cutting out sugar with the candida diet in an attempt to cure it might not have any positive effects at all. She also has a problem with the fact that the candida diet restricts a lot of foods, which can lead to deficiencies in nutrients, which in turn can lead to other health problems. She emphasized that there is not nearly enough research to prove that changes in your diet can reduce any sort of infection.

Even though the diet seems to have gotten a lot of negative feedback from most experts, Pollyanna Hale, who is a nutritionist, personal trainer, and weight loss coach, is more positive. She believes that following the candida diet may indeed help to relieve some of the symptoms caused by overgrowth because it focuses on cutting out foods that help candida thrive –  like nuts which contain molds. In contrast, it encourages foods like garlic and coconut that possess natural anti-fungals. She added that the diet can be adjusted to your needs as well – not everyone will have to follow it as strictly, depending on how severe their symptoms are. She does warn that you may experience unpleasant flu-like symptoms when the candida in your body starts dying off, so you might feel worse before you start feeling better.

In short, it’s clear that there is no evidence to prove that the candida diet is going to cure anything at all. If you have the guts to try it, do go ahead – it might work wonders for you. Alternatively, you can always incorporate some of the diet’s tips into your own lifestyle.